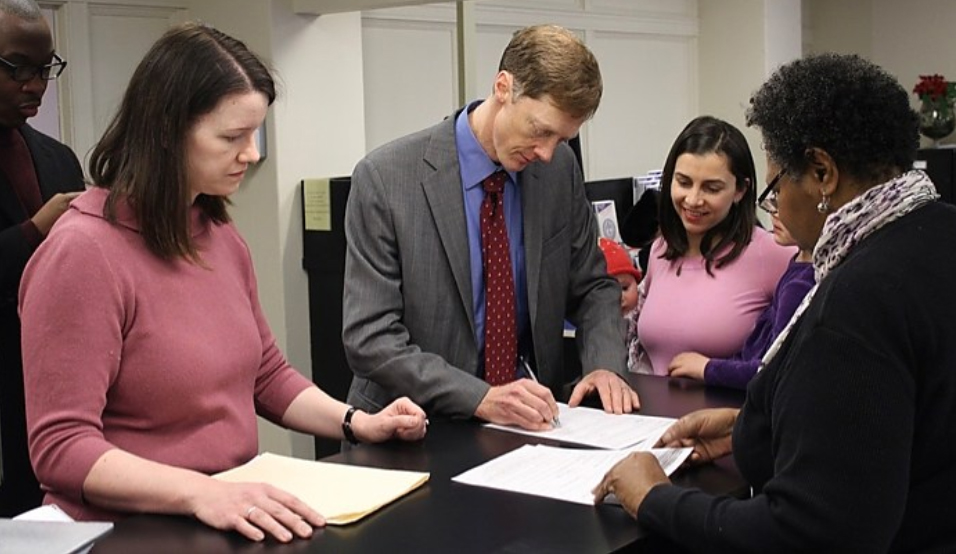 Surrounded by his wife and two young daughters, Justin Elicker has filed papers to challenge incumbent Toni Harp for New Haven mayor — and opened with a focus on cleaning up lead paint in children’s homes and money fueling election campaigns.

Elicker made the announcement Wednesday at the City Clerk’s office, where he submitted paperwork necessary to run as a Democrat in the 2019 party primary for mayor.

Elicker ran a spirited campaign for mayor in 2013 when the seat was last open. Elicker, an alder at the time, emerged as the top opponent in a crowded field against frontrunner Harp, who was a popular state senator. Elicker came in second place in a Democratic primary, then lost to Harp 55 to 45 percent in a one-on-one general election match-up, when he ran as an independent. Since then Elicker has served as executive director of the New Haven Land Trust, during which time he has expanded the organization’s budget, created green-entrepreneurial programs for city teens, and revived a summer Schooner camp on the water.

Elicker Wednesday claimed to have quintupled the Land Trust’s budget and expanded its mission to create more opportunities for young people. He promised to take a similar approach to the city if elected mayor assembling a strong team of department hands, tackling “serious financial problems” by making “tough choices,” and “pushing the boundaries of what we can accomplish together.”

He manages five full-time employees and dozens of part-timers and volunteers at the Land Trust. Asked if he can translate that experience into overseeing a bureaucracy with some 4,000 employees, Elicker responded that the mayor’s job requires the hands-on daily management of a much smaller group: department heads.

Harp said she plans to seek for a fourth two-year mayoral term this year.

I expect to run. I’m sure that there will be a wide field of people who will run for mayor,” she said in an interview Wednesday morning. “Almost every elector has the opportunity to run.”

Click here to read a story in which she previewed her pitch for having presided over a decline in crime, an improvement in graduation rates, and a building boom.

“I love New Haven,” Elicker, who is 43, declared at his announcement Wednesday morning. In his 10-plus years in the city, he said, “I have spent so much time both doing what I can to make the city better and in many ways receiving so much from the city in how it’s broadened my own horizons, exposed me to new people, new ideas, challenged my own perceptions of who I am and who I want to be.”

Elicker said his campaign will focus on how to address the city’s structural financial problems, how to ensure that all New Haveners have access to safe and affordable housing, and on how to fix areas of city government that currently seem to be broken, such as how the city’s health department currently handles lead paint inspections and abatement enforcement.

He argued that the city can do a better job targeting problem absentee landlords in its lead inspections. He also suggested stepping up fines on slumlords, and using that money to hire more code inspectors. He criticized the Harp administration for stumbles in enforcing lead paint laws and in taking too long to get a task force moving to make improvements.

“Legal aid has to sue the city and sue the city to get them to enforce that laws that exist” while children’s health is at risk, Elicker said. (Click here and here and here to read about the criticisms of city’s lead paint enforcement from two judges and legal aid and revelations that the health department relies on handwritten paper records rather than computerized files to try to track cases, as well as the city’s defenses.)

Harp defended the city’s lead paint enforcement, noting that it enforces a stricter level than that required by the state. Instead, it holds landlords to lead-paint levels mandated by the federal Centers for Disease Control, which consider far smaller traces as dangerous to children’s health.

“I think we have done a better job than most places. We have legal aid here. Of course they watch our every move. I would say we probably respond at a [stricter] rate and do a better response than almost any other city in the state,” Harp argued.

Elicker said he will again use public financing for his mayoral campaign, despite the larger network of donors he has cultivated in his tenure at the Land Trust.

“I believe in big money not influencing city politics,” he said. “I do not want to be beholden to anyone because they wrote me a big check.”

He said that he is leaving open the option of running as an independent in the general election if he fails to win the Democratic primary, as he did in 2013.

He submitted paperwork Wednesday to participate in the Democracy Fund, which administers the public financing system. That means donors to his campaign are limited to contributions of up to $370, rather than the $1,000 otherwise allowed under the law. And it means Elicker can’t accept money from political action committees. Harp did not participate in the Democracy Fund in the 2013 campaign or in campaigns since then.

“I don’t like the way that it works. It’s difficult to maneuver,” Harp said of the fund. “I don’t even know if it has enough money it for people to run.”

Several people active in New Haven affairs have been considering challenging Harp this year. Among them are legal aid attorney Liam Brennan, who as a federal prosecutor helped win a conviction against former Gov. John Rowland for corruption; and activist Wendy Hamilton.

The potential challenges come after year in which violent crime continued to drop in New Haven while a buildingboom continued, but also in which a tax hike, ongoing Board of Education turmoil, long-term borrowing for operating expenses and short-term deficit reduction, and lead-paint regulation failures have sparked criticism of Harp’s administration.