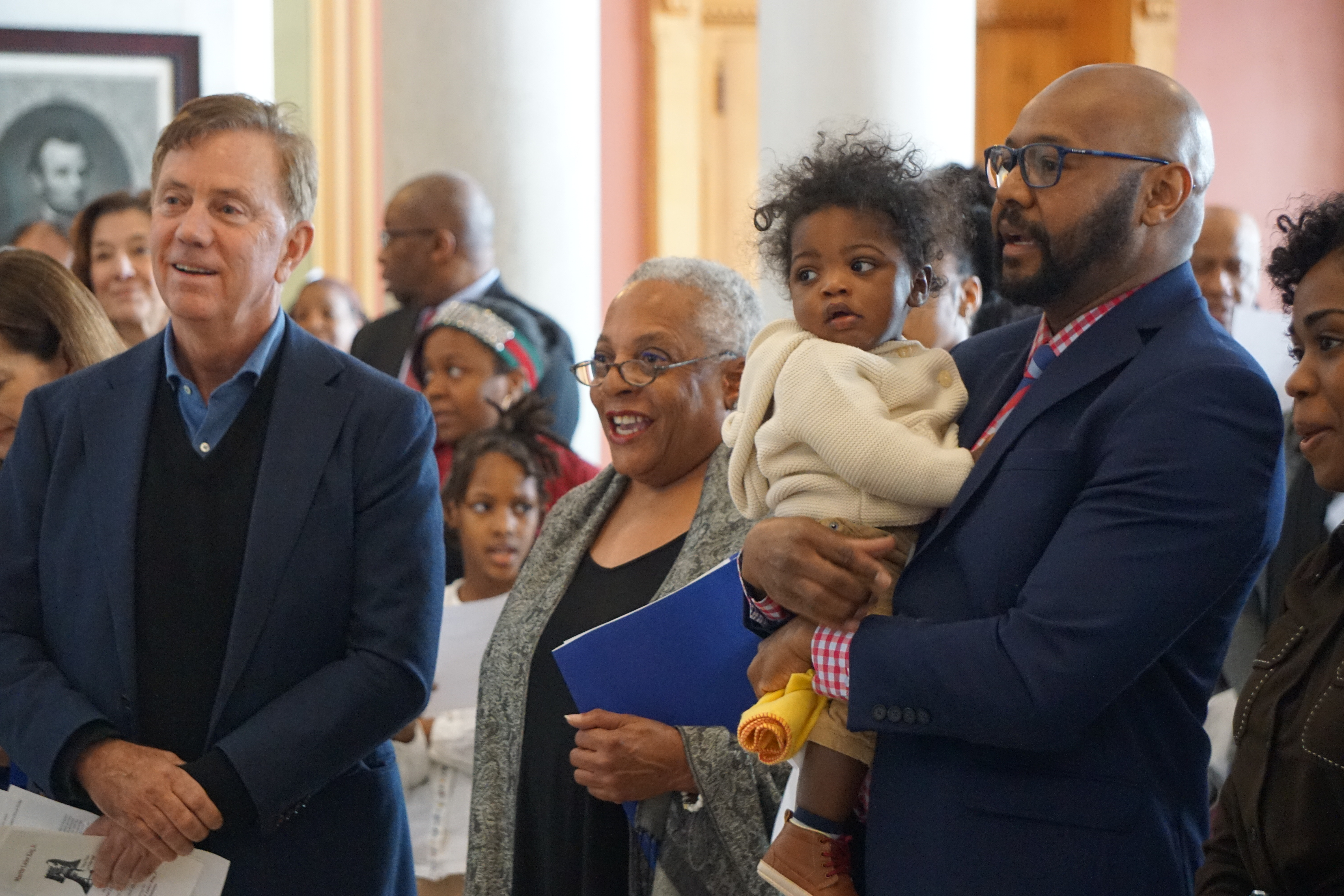 Connecticut politicians on Monday cast contemporary debates over immigration, a $15 minimum wage, paid family and medical leave, school integration and early voting as the legacies of Martin Luther King Jr.’s crusades for social, economic and racial justice in the 1960s.

With comments both oblique and direct, Democratic elected officials used King’s memory to rebuke President Donald J. Trump, whom they described as the antithesis of King and his fights for voting and economic rights for disenfranchised Americans.

“Somewhere, Martin Luther King is looking down, and he sees an America that is not going forward in a straight line,” Gov. Ned Lamont said. “He sees rhetoric that can be divisive and hateful coming from Washington, coming from this White House. But he’s not looking there and just shaking his head. He says, ‘Get up and stand up and do something about it.’ ”

Lamont was one of a half-dozen Democrats addressing an audience of more than 1,000 at the 34th annual MLK Scholarship breakfast organized at the Connecticut Convention Center by Delta Sigma Theta, the African-American sorority.

“We will build bridges, not walls, in this great nation,” U.S. Sen. Richard Blumenthal said.

The audience applauded the line, a reference to both Trump’s stalemate with Congress over a wall on the U.S.-Mexico border and Vice President Mike Pence’s citation of “I Have a Dream” speech Sunday on CBS’ Face the Nation: “One of my favorite quotes from Dr. King was, ‘Now is the time to make real the promises of democracy.’”

“You think of how he changed America. He inspired us to change through the legislative process, to become a more perfect union,” Pence said. “That’s exactly what President Trump is calling on Congress to do: Come to the table in the spirit of good faith.”

More than a half century after King’s death and on the 90th anniversary of his birth, King is very much present in public life, his legacy subjected to endless interpretations about where he would stand on the issues of the day.

Treasurer Shawn Wooden, the state’s only black statewide elected official, noted King’s emphasis on economic justice near the end of his life, an issue that resonates deeply in Connecticut, a state of great wealth and poverty.

Hartford Mayor Luke Bronin, the white Ivy-League educated mayor of a minority-majority city,  embraced the more aggressive and less quoted side of King, warning against letting King be remembered only for conciliatory platitudes, not his sharper and more challenging assessments of privilege and poverty in the U.S.

Bronin described a political cartoon by David Horsey of the Seattle Times published Monday in The Hartford Courant depicting a tuxedo-clad white man, cocktail in hand at a museum reception, looking an MLK display that featured this King quotation: “The problems of racial injustice and economic injustice cannot be solved without a radical redistribution of political and economic power.” 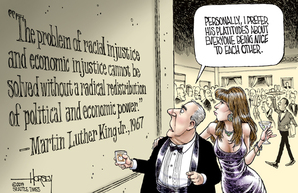 Click on cartoon to see enlarged version on cartoonist’s site.

The man turns to a woman and says,” Personally, I prefer the his platitudes about everyone being nice to each other.”

“I thought it was a pretty powerful cartoon, because all over the state and all over the country today, people will be quoting platitudes,” Bronin said, quickly pivoting to issues coming up this year at the State Capitol, including the $15 minimum wage and paid family and medical leave. “Would that be considered radical? I don’t think so.”

Lamont, Blumenthal, Bronin, Wooden, Lt. Gov. Susan Bysiewicz and U.S. Sen. Chris Murphy addressed the breakfast audience, then fanned out across the state for other observances.

Merrill said her proposal to allow early voting in Connecticut is in King’s tradition of easing ballot access. She said her dream was that everyone eligible to vote would register and turn out.

Elizabeth Horton Sheff, a former Hartford councilwoman and  lead plaintiff in the Hartford school desegregation case, Sheff v. O’Neill, was honored at the remembrance as a “justice seeker.” She smiled when Lamont mentioned one of King’s favorite aphorisms, that “the arc of moral universe is long, but it bends towards justice.”

Lamont said that is true “only if we stand up every day” and push for justice. He acknowledged Horton Sheff, thanking her for for “making sure that educational justice is an opportunity for everybody, and we’re going to carry that forward.”

The governor was gone, on his way to an MLK event in New Haven, when Horton Sheff addressed the audience, reminding them that the Sheff plaintiffs were still in court, fighting over the definition of segregation. 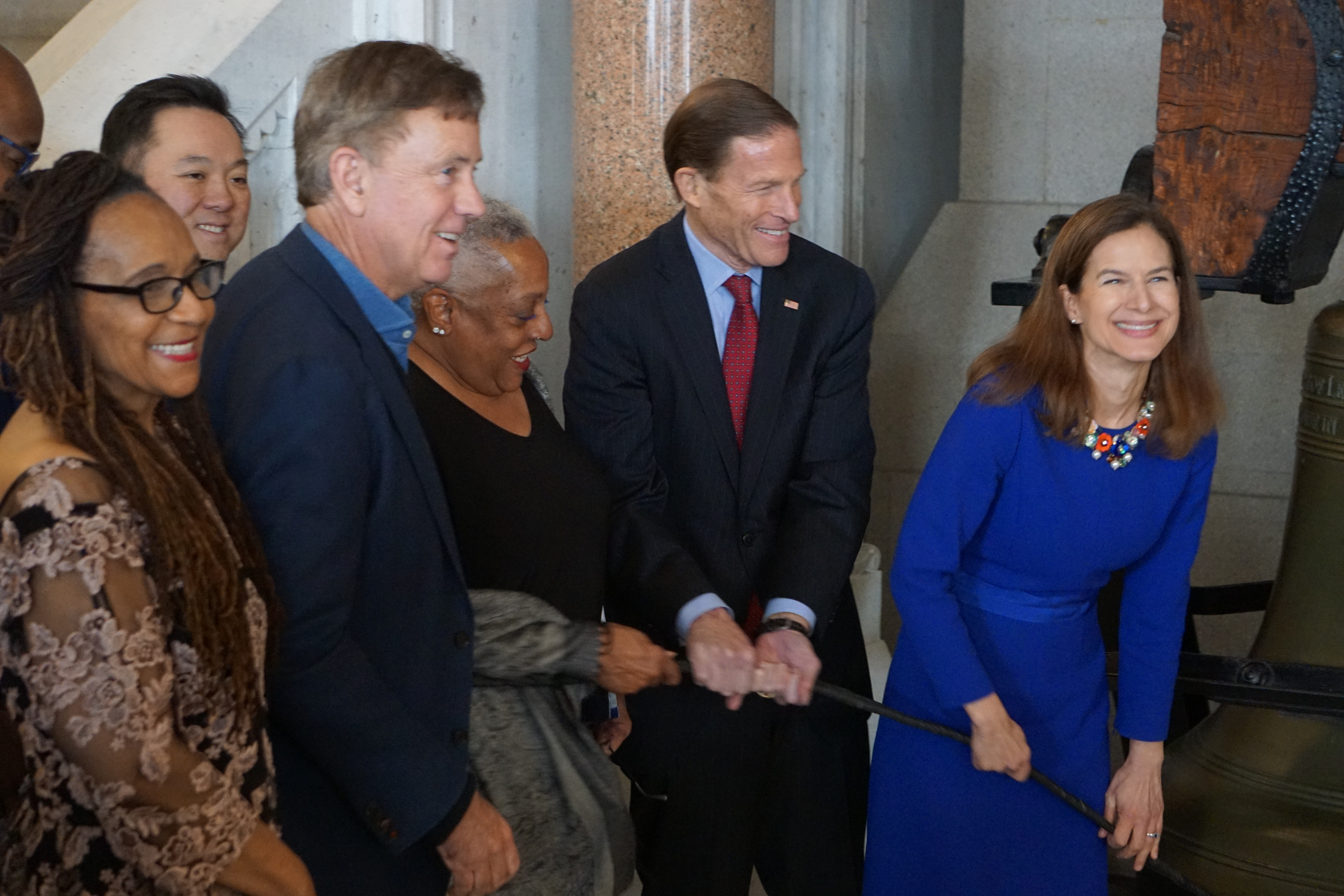