CT federal workers to be paid, but government could shut down again 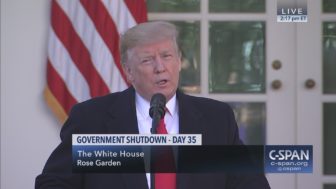 On Friday, President Trump announced a temporary halt to the government shutdown

Washington – The pact between congressional Democrats and President Donald Trump to temporarily end a 35-day partial government shutdown is more of a truce than the end of hostilities.

The agreement, announced by Trump Friday afternoon from the Rose Garden at the White House, will allow about 1,500 federal employees in Connecticut affected by the shutdown to receive all back pay due them.

As soon Trump announced the deal, labor unions representing federal workers demanded the government make a “special run” to provide paychecks for those who have worked, or been furloughed  without pay for weeks.

The “Government Employee Fair Treatment Act,” passed by Congress and signed into law on Jan. 16, requires federal employees affected by the shutdown to receive their back pay at the “earliest date possible” after the government reopens, regardless of the next regular scheduled pay date.

If so, federal workers could receive their back pay as soon as Wednesday.

“As the shutdown created more suffering for hardworking people by the day, we are relieved that the government is set to reopen but we will not give up the fight until our members get the back pay the president promised and they deserve,” said Juan Hernandez, Vice-President of 32BJ Service Employees International Union Connecticut.

Congress on Friday rushed to send a bill that would end the shutdown until Feb. 15  to the president’s desk. The reopening of the federal government will restart grants to Connecticut non-profits and government agencies and restart a number of services that have been unavailable.

But the legislation does not contain any money for Trump’s border wall, allowing instead for negotiations on that issue.

“If we don’t get a fair deal from Congress, the government will either shut down on Feb. 15 again or I will use the powers afforded to me under the laws and the Constitution of the United States to address this emergency,” Trump said, referring to his potential use of executive power to fund the border wall as a matter of national security.

Still, Trump blinked after the Federal Aviation Administration temporarily halted flights into New York’s LaGuardia Airport on Friday because of a shortage of air-traffic controllers, a disruption that cascaded through East Coast airports such as Newark Liberty International and Philadelphia International Airport.

Connecticut Airport Authority Executive Director Kevin Dillon said on Friday, “While there is currently no operational impact at Bradley International Airport due to the government shutdown, sooner or later there might be.”

“The shutdown needs to be brought to conclusion,” Dillon said.

Coordinated sickouts by thousands of Internal Revenue Service agents tasked with processing tax refunds without pay also raised the political stakes over the shutdown, as did public sympathy for the hardships experienced by unpaid federal workers.

The shutdown began on Dec. 22 after congressional Democrats and Trump could not agree on border wall funding and appropriations lapsed for nine major government agencies and several smaller ones.

Connecticut’s Democratic lawmakers lauded the temporary return to normalcy offered by the agreement.

“I hope that this moment marks an end to the chaos and instability we have seen over the past 35 days, and that both parties can get back to the important work of governing our country responsibly,” said Rep. Rosa DeLauro, D-3rd District. “The President must end his use of hostage taking for his manufactured crisis at the border once and for all.”

Gov. Ned Lamont encouraged “everyone to come to the table in good faith to find a way to reopen the government permanently and in a way that best underscores the values of our country and our people.”

Sen. Richard Blumenthal, D-Conn., said “I hope this is the end of President Trump’s temper tantrums and the start of real Congressional leadership as we move ahead with a long-term spending plan and border security negotiations.”

Trump said that a congressional conference committee would spend the next three weeks working in a bipartisan fashion to come up with a border security package.

The bipartisan panel is expected to be composed of members of the House and Senate Appropriations Committees. But it wasn’t immediately clear Friday if Connecticut’s members of those panels, DeLauro and Sen. Chris Murphy, will be involved.

Speculation on a deal that would reopen the federal government permanently includes funding for what Democrats call “fencing,” and perhaps a bill to protect young immigrants known as Dreamers and other immigrants who are slated to lose their protections from deportation.

Some Democrats blasted Trump for not accepting earlier proposals that would have temporarily kept the federal government open.

“So Trump is agreeing to the EXACT SAME DEAL he rejected 35 days ago. What a debacle. I’m so, so sorry, America,” Murphy tweeted.

Rep. Joe Courtney, D-2nd District, tweeted that Trump’s “announcement today will provide some relief for employees who have been grossly mistreated over the past 35 days. Still, this deal is the same one that could have passed in December, avoiding the #shutdown. What is clear is that a shutdown should never be used as leverage again.”

Meanwhile, Republicans sought to portray the breakthrough as a softening of the Democratic position on the shutdown.

“After the longest government shutdown in history and after government workers missed two pay periods, Democrats have finally decided to come to the table and negotiate,” said House Minority Leader Kevin McCarthy, R-Calif. “Now is the time to put people before politics and solve this problem.”