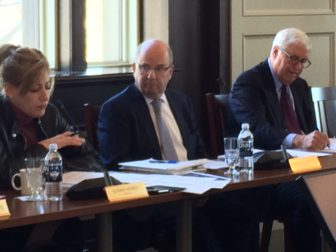 Thomas C. Katsouleas, the finalist for the UConn presidency, is not only provost and executive vice president of the University of Virginia and an inventor and researcher with hundreds of publications, he is also a sailor and surfer with an apparent philosophical bent.

That information, however, is gleaned from the public record about Katsouleas – not the university that is poised to hire him as its leader. Although sources have named Katsouleas as the university’s choice to succeed current President Susan Herbst, no mention was made of him at Wednesday’s UConn Board of Trustees meeting.

Board Chairman Tom Kruger declined to comment on Katsouleas’ status, preferring to maintain the confidence of the six-month search despite news reports on the university’s choice, first in the CT Mirror and then in other publications.

The trustees went into executive session at the end of the meeting, which was followed by a meeting of the presidential search committee, but Kruger said he couldn’t comment on what transpired during those meetings.

Board members have been told to expect to gather next Tuesday to vote on Katsouleas’ candidacy. Gov. Ned Lamont is planning to attend that meeting.

Reached by phone Wednesday, Katsouleas said, “The only thing I can say is you need to talk to the University of Connecticut. I think very highly of the university.”

His departure from UVa had been planned since shortly after the president who hired him, Theresa A. Sullivan, announced her intention in 2017 to resign.

Katsouleas was one of three publicly identified finalists for president of the University of Utah, a school with a search process that is more public than UConn’s. The university’s search committee worked in confidence and did not identify either of the two finalists interviewed by Lamont the weekend after taking office on Jan. 9.

Katsouleas has two physics degrees from UCLA, earning a B.S. in 1979 and a Ph.D in 1984. He began a career teaching and researching physics, electrical engineering and computer science at USC.

But in a convocation speech at UVa in 2018, Katsouleas reflected on his uneven academic beginnings while speaking to students who were all in the top 20 percent of their class.

“It’s interesting for me to think back about where I was at exactly this time in my own life — October of my third year of college,” Katsouleas said. “My head was in a different place. I had transferred that fall from a community college to UCLA. I had just taken my first midterm in a large calculus class of 400 people and … I had bombed!”

Katsouleas said it was his first test “at the big U” and he was late, got the last seat at the back. When he finally got the exam, he said he immediately dropped his pencil, which he heard rolling down the sloped auditorium floor.

He ended up with a “flat F” on the test and, at that point, threw out all thoughts of grad school and decided to focus on bringing up his grades to a C so he could graduate and get an engineering job.

“Fortunately, I went to see my professor and he generously offered to replace my midterm grade with my final grade,” Katsouleas said. “… My point is that you are in a far better place than I was.”

Katsouleas also said in that speech that he has had “an off-and-on decades-long quest to understand the secret of happiness.”

In a 2012 essay that Katsouleas wrote on Mashable.com about the connection between higher education and happiness, he said that Richard Easterlin, an early economist in the “econometrics of happiness,” found that economic success and having kids did not correlate with happiness, but health, marriage and education did.

“What he found was that education was related to making a better living in that those with more education tended to have higher incomes,” Katsouleas wrote. “However, as a person’s income rose over time, their happiness did not. Yet, the bump up in happiness that began early in life for those with more than a high school education persisted throughout their lives. In essence, Easterlin dispelled any lingering notion of the old stereotype of “dumb and happy.” In fact, people with more education were happier than those with less.”

Katsouleas went on to observe that in the 4th Century BC, Socrates asserted “that the purest form of happiness was sharing with someone else something you have learned.”

In his convocation speech, Katsouleas also spoke of Socrates, threading the philosopher’s words on happiness throughout his speech, noting that he found the reference in a physics textbook when he was a student.

Katsouleas also talked in that speech about his first calculus teacher, Mr. Crawford, at Santa Monica Community College in California, who shared “a single recipe-like prescription: ‘All happiness comes from successful effort.'”

Katsouleas said that over the years, the recipe seemed “simple and true enough,” but he realized that things were missing.

He noted that a fellow surfer named Donald Cram, a chemistry professor at UCLA when Katsouleas was a young post doctorate, won a Nobel prize. While Cram’s effort was clearly successful, Katsouleas noted that Cram said, “one of his greatest sources of happiness was surfing and sitting under a palm tree at San Onofre Beach.”

“So what have we learned?” Katsouleas said. “Happiness comes from surfing and sitting under a palm tree and also working hard. It comes from taking care of your health and your family life. It comes from helping someone across the street and helping the planet. And it comes from learning.”

Noting that it’s the detours “from a straight line path in life,” that can provide formative experiences, Katsouleas said he probably learned the “most that has been valuable to me in my present role while I was an ocean lifeguard in Santa Monica on weekends.”

“My favorite things about lifeguarding were the camaraderie of a great team, and the joy and relief of pulling swimmers (or non-swimmers) out of riptides, especially on crowded weekends …” he said. “Still I didn’t lifeguard in preparation for a future position in higher education. It was a way to be in a place that I loved, with people I respected, doing work I believed in.”