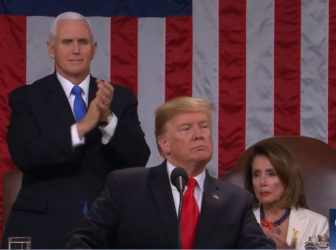 Washington – President Donald Trump hammered familiar themes – including the need to curb immigration and boost infrastructure – and unveiled several new initiatives during his State of the Union address Tuesday night, but Democrats panned the speech even before he uttered the first word.

Trump delivered his second State of the Union speech Tuesday night to  a divided Congress and a divided nation.

As he did during last year’s State of the Union address, Trump made a pitch for bipartisan unity.

Trump spoke of a booming economy and American exceptionalism, saying the nation
“is winning every day.”

But for many Democrats, some of what Trump said rang hollow while other parts of the speech were clearly fighting words, including his repeated demand for border wall funding that has already resulted in a 35-day partial government shutdown.

Sen. Chris Murphy, D-Conn., said “I don’t know that it matters what the president says in his speech – whatever he says he will contradict in the next 24 hours.”

The president gave his speech as the investigation by special counsel Robert Mueller inches towards its conclusion after the indictment of six Trump associates, including longtime ally Roger Stone.

“If there is going to be peace and legislation, there cannot be war and investigation,” Trump said. “It just doesn’t work that way!”

“His call for an end to the Russia investigation is yet another effort to derail and even obstruct or avoid any accountability for potential wrongdoing,” said Blumenthal. “That line shows all the more why the special counsel must do a report with all the facts and evidence and disclose it directly to the American people.” 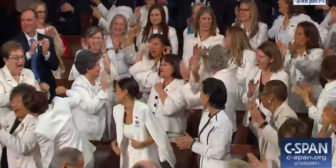 Trump spoke to the nation just 10 days before the potential start of another partial government shutdown, the result of a failure of congressional Democrats and the White House to come to an agreement on the budget.

In this context, his calls for unity were not dismissed by Rep. John Larson, D-1st District.

“The President struck the right tone in calling for bipartisanship,” Larson said.  “Over the next week, our number one priority needs to be ensuring we fund the federal government. Our nation cannot be thrown into chaos again while our federal workers and contractors go unpaid.”

Trump spent a considerable part of his speech warning of the dangers of illegal immigration and once again pressed for money for his border wall, something Democrats say is a non-starter.

“I will get it built,” the president vowed.

Trump said there are new “caravans” of immigrants from Central America on their way to the United States and that Mexican cities “in order to remove the illegal immigrants from their communities, are getting trucks and buses to bring them up to our country in areas where there is little border protection.”

He said he has ordered another 3,750 troops to the border with Mexico.

DeLauro also said Trump’s speech was “rife with hypocrisy” because the president spoke of his support for protections for those with pre-existing health conditions while he simultaneously supports efforts to eliminate those protections, provided by the Affordable Care Act.

“The speech was short on a vision of our country and was divisive under the cover of bipartisanship,” she said.

Murphy said Trump’s speech “could have been a lot worse.”

“But his platitudes about working together are totally meaningless when the minute he goes off script, he returns to the divisive, reckless, my-way-or-the-highway style that has paralyzed Washington for the past two years,” Murphy said. “Truthfully, the state of our union is a mess, and it’s because Trump has taken a wrecking ball to democratic norms, objective truth, and the value of American diversity.”

Congressional Republicans, however, were enthusiastic about Trump’s speech.

“President Trump just hit it out of the park,” said House Minority Leader Kevin McCarthy, R-Calif. “He offered a vision of America that both parties can support. Now, Democrats have a choice. They can continue to resist or they can choose to work together to keep making America greater than ever.”

House Speaker Nancy Pelosi, D-Calif., who sat behind the president as he gave his address, did not say anything. But she managed to send a message anyway by inviting two active-duty transgender Army officers — a rebuke of Trump’s decision to ban transgender service members — and the father of a victim of last February’s mass shooting at a Florida high school in protest of GOP opposition to stricter gun control. 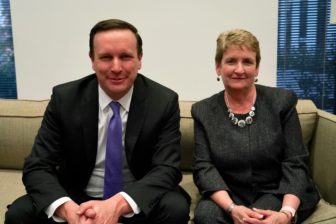 Murphy’s guest was Regina Moller, executive director of Noank Community Support Services, which cares for immigrant children, including two who were separated from their families at the U.S.-Mexico border last week.

Moller said she had hoped Trump would “acknowledge that there are some criminals who come across the border, but the majority of children are coming for a new life, a safe life.”

Rep. Joe Courtney, D-2nd District, hosted Lt. Commander Kimberly Young-McLear, an instructor at the U.S. Coast Guard Academy. According to the Department of Homeland Security’s inspector general, Young-McLear, who is black, suffered retaliation after she made complaints about being the target of workplace bullying for years. 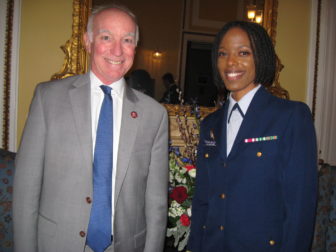 Abrams said “families’ hopes are being crushed by Republican leadership that ignores real life or just doesn’t understand it.”