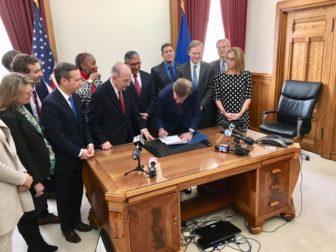 Gov. Ned Lamont signs his first bill, a bipartisan measure. The budget will be harder.

It was a useful trait when he was gaming business scenarios in the late 1970s as an MBA student at Yale, developing ideas for a different kind of cable company he launched in 1985, or teaching in recent years at Central Connecticut State University.

“I think it’s sort of the only way I know how to do business,” Lamont said.

It is precisely what he says new governors are advised not to do. At an orientation by the National Governors Association shortly after his election in November, Lamont was warned there is no such thing as conversations without consequence for governors, no safe exploration of ideas that may be examined, only to be discarded.

“They said, ‘Absolutely not. Keep your cards close to the vest. Anything you talk about will be immediately leaked. You’ll be embarrassed and it won’t move the ball at all,’ ” Lamont recalled, pausing a moment before adding, “I think you kind of know that’s not my style, right?”

Connecticut’s lawmakers are trying to get a grip on what precisely is his style — and what it portends about his ability to rally a legislature and public around his budget proposal. It inevitably will be the latest in a series of difficult budgets, a consequence of needing to pay down one of the largest unfunded pension liabilities in the U.S.

Last week, Lamont had back to back meetings at the Executive Residence with leaders of the House of Representatives, then the Senate. He previously met there with labor leaders. He didn’t present a blueprint for how he intends to balance his first budget, which is due to the General Assembly on Feb. 20. But he talked broadly about challenges and expressed an openness to considering new approaches.

“I talked out loud about what I was thinking about, and the scale of the problems, frankly. At least I want them to know what the stakes are. Nobody said, ‘I support this’ or ‘I oppose that.’ It wasn’t that kind of a discussion,” Lamont said. “I wasn’t asking anybody to check a box.”

Senate President Pro Tem Martin Looney, D-New Haven, and others declined to comment in great detail about their talks with Lamont, who made clear during his campaign that he would look to expand the list of items subject to the 6.35 percent sales tax, which now produces $4.2 billion of the state’s $20 billion budget.

“We did talk a little bit, just in general, about the nature of the sales tax and the fact it was structured when our economy was somewhat entirely dependent upon products and goods, and now it’s heavily dependent upon services,” Looney said. “We did say, basically, the two options to address the sales tax are, one, a base expansion and the second is a rate increase.”

Lamont already has learned that even exploring all revenue options, even if you don’t widely talk about them, carry the risk of a political backlash. A recent CT Mirror story reporting that one of the options being considered was taxing groceries prompted a fast and furious outcry.

Lamont, a self-described policy wonk who has financially supported the center-left Brookings Institution and took a mid-career sabbatical to study at the Harvard Kennedy School Institute of Politics, said his office never intended the research about taxing groceries to go public — nor was it seriously considered, at least not the part about food.

“But it was one of hundred different options that I asked everybody to look at,” he said.

The episode is a reminder that selling ideas about taxes require sound bites, not white-paper explanations about how consumption taxes can be made less regressive. Asked if he learned anything from the outcry, Lamont indicated he is unsure if there was a way to sell the idea, had he deemed it desirable.

“Maybe I can say, ‘I reduce the rate. I can give you a tax credit. I can make sure that middle-class people are held harmless. It’s a progressive consumption tax.’ I can give you all my Brookings type of analysis on this stuff,” Lamont said, then smiled and added, “It was absolutely irrelevant to anything that happened, right?”

It is those moments when Lamont still seems more like an arch observer of politics, not a native.

Lamont is hardly new to the game, having run and and lost two statewide races, famously in a 2006 U.S. Senate race and forgettably in a 2010 primary for the Democratic gubernatorial nomination. His challenge to Sen. Joseph I. Lieberman over the war in Iraq burned with a sense of purpose, one that drew him a national audience. But he didn’t establish a firm political identity as a gubernatorial candidate four years later.

In both races, Lamont seemed amused by the attention politicians give to optics. In 2006, he garaged his dark Lexus convertible for a politically correct Ford hybrid, a gesture that he regularly undermined by joking about it.

Lamont came across in his first campaign as earnest, if wide-eyed. 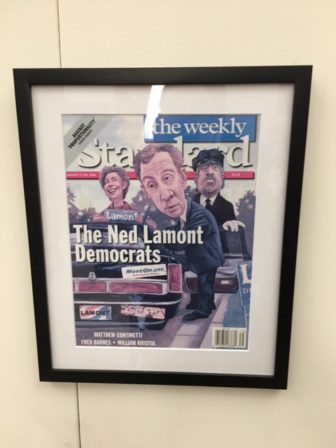 The Weekly Standard saw him as a limousine liberal in 2006. It hangs on his wall.

In the Hartford Courant, cartoonist Bob Englehart portrayed him as the proverbial deer in the headlights, complete with antlers. The original cartoon hangs in Lamont’s office at the State Capitol, as does a depiction of him on the cover of the The Weekly Standard as a limousine liberal, chauffered in a black town car festooned with a MoveOn.org bumper sticker.

Lamont was willing to play the optics game in 2018, opening his campaign with an ad showing him driving a Chevy Equinox leased by the campaign, not the blue Tesla the family owns. “So, I turned sixty-four this year,” Lamont said in the ad. “Kind of liberating, actually. I’m not running for governor as a stepping-stone, not thinking about re-election, not going to take a salary and I don’t need a government car. This one’s going to do just fine.”

Lamont, a Greenwich businessman who spent $12 million on his own campaign, is not collecting a salary. And no one thinks he is gunning for higher office. But as was the case with his predecessors, Lamont is driven by a state trooper in a government car.

Whether an asset or liability, Lamont arrived in Hartford for his inaugural on  Jan. 9 with few deep political relationships and no sentiment among Democrats that they owed their newly solid legislative majorities to the new Democratic governor. He is walking a difficult line, vowing to improve Connecticut’s tattered reputation as a good place to do business, while insisting he is a friend to labor.

His economic development commissioner is a Goldman Sachs partner, a man listed as one of the most influential voices in commercial real estate. His commissioner of administrative services is a former tech entrepreneur whose investors included Lamont’s wife, Annie, a successful venture capitalist. The former CEOs of PepsiCo and Webster Bank are leading a new public-private partnership to promote the state.

“They’re all 100 percent in. I just think they bring a whole different perspective to, certainly, economic development, maybe more broadly in terms of what we’re trying to do,” Lamont said. “But I also have got to make damn sure people remember I’m here fighting for my friends in labor. I understand they want to make sure that they’ve got a governor who’s looking out for them, certainly looking out for the middle class and looking out for an economy that works for everybody. I think you can be inclusive and also remember that it’s a wide net.”

A governor for one month, Lamont is getting predictably good reviews for simply reaching out to a wide range of political players, mostly in small gatherings he is hosting at the state-owned Executive Residence, a 110-year-old brick Georgian Colonial-style mansion in Hartford’s West End. With his wife running a business in Greenwich, the governor is free most weeknights to entertain in Hartford.

“I like it. I like it a lot. He has this genuine interest in other people’s opinions, other people’s perceptions,” said House Speaker Joe Aresimowicz, D-Berlin. “He hasn’t really come down with how it will influence his decisions, but the genuineness to ask the questions and to listen from both sides of the aisle, people in the private sector, public sector. I think it’s really refreshing, and it’s genuine. You can tell it’s genuine.”

Senate Minority Leader Len Fasano, R-North Haven, concurs that Lamont is open to a broad range of ideas, a good start to a difficult job.

“He is a very pleasant man,” said House Minority Leader Themis Klarides, R-Derby. “He wants people to get together, and that things are best when people get together.”

More likely is that Lamont will be judged as governor by how and when he chooses to disagree with  legislative leaders, whom he readily concedes have far more experience in the business of crafting politically viable budgets, though he dryly notes that budget experience in Connecticut should not always be viewed as a positive.

He smiled. The new governor is willing to display a cartoon depicting himself as a deer in the headlights. He’s happy legislators find him to be pleasant. But he suggests no one should assume him naive.

“I’ll take some advice. I want a little bipartisan buy-in. I just think it’s better for the state. That probably is wishful thinking,” Lamont said. “Why not try? Why not? What do I lose by trying?”