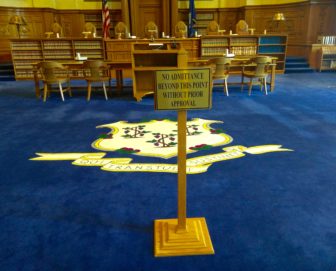 Republican Jim Feehan, the loser of a close General Assembly contest marred by a ballot mixup, is once again asking the Connecticut Supreme Court to order a new election, arguing that the legislature’s review was flawed and violated the constitutional rights of Feehan and the voters who were given wrong ballots.

A legislative Committee on Contested Elections recently deadlocked along partisan lines over the question of whether to recommend a new election in the 120th House District of Stratford, where an estimated 75 voters were given the wrong ballots in a race that the Democratic incumbent, Philip Young, won by 13 votes.

The court dismissed Feehan’s original legal challenge, noting that the Connecticut Constitution gives the state House of Representatives jurisdiction over disputed House elections, while leaving open the question of whether the legal standard employed by the House eventually could be subject to judicial review.

The four-member legislative committee of two Democrats and two Republicans agreed on the basic facts: An estimated 75 voters at Bunnell High School, a polling place for two legislative districts, were given the wrong ballots.

“Given that finding, the next step should have been straightforward — a new election,” Das wrote. “Nonetheless, after the investigation was completed, the two Democrats on the Committee refused to call for a new election, without regard to deprivation of the constitutional rights of due process, equal protection, and political participation.”

The motion for reconsideration had to be filed by the end of business on Monday, but its timing also could play a secondary role by framing the issue for the House of Representatives, which has yet to act on the committee’s report.

House Democratic and Republican leaders are negotiating on a resolution that would come before the full House, with the GOP arguing for a new district-wide election and Democrats, according to House Minority Leader Themis Klarides, R-Derby,  offering to support a resolution calling for a new vote only at Bunnell, one of the eight polling places in the 120th.

House Majority Leader Matt Ritter, D-Hartford, declined to comment on the negotiations, but noted the concept of a partial special election was raised by Democrats in the final report of the Committee on Contested Elections.

House Speaker Joe Aresimowicz, D-Berlin, said Tuesday the full House eventually will debate and vote on the report Democrats now control the House by a majority of 90-59, with two vacancies created by the resignation of lawmakers who joined the administration of Gov. Ned Lamont. Young was sworn in on the opening day of the session on Jan.9.

“We’re having a discussion about everything right now, including what standard should apply,”  Ritter said. “We hope in coming days to finalize those conversations.”

Ritter said legislators are aware of the court’s concerns about due process, as expressed in comments during oral arguments and in its written decision.

Das, who declined to comment Tuesday, said in his motion that Connecticut case law, as established in cases involving municipal elections, are clear: “Where a sufficient number of voters are given the wrong ballots so as to call into question the reliability of the election, Connecticut law requires that a new election be held.”

The two Republicans on the elections committee, Reps. Jason Perillo of Shelton and Vincent Candelora of North Branford, said the only solution to the Stratford mixup would be a special election involving the same field of candidates.

The two Democrats, Reps. Michael D’Agostino of Hamden and Gregg Haddad of Mansfield, concluded that a new election would disenfranchise the voters who cast the correct ballots, since every election is a “snapshot in time” and cannot be precisely replicated.

Das said they appeared to base their decision on the absence of evidence about the original intentions of the 75 affected voters — suggesting that Feehan failed to meet a standard the committee never articulated.

“Having decided not to do so, it is now disingenuous to fault Feehan for not presenting testimony from voters,” Das wrote. “The decision to place this burden on Feehan is even more ludicrous when one considers that he would need to violate state law in order to meet it. The state constitution expressly provides that “[t]he right of secret voting shall be preserved.”