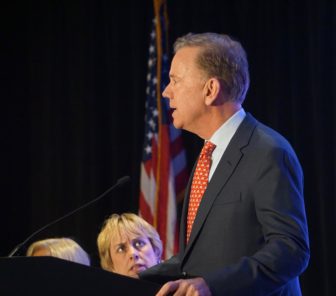 Gov. Ned Lamont, whose centrist approach to taxes and spending are a source of tension with liberal Democrats, delivered on two campaign promises to progressives Wednesday by endorsing a paid family and medical leave program and raising the $10.10 minimum wage to $15 over four years.

Lamont said the legislative package accompanying his budget proposal next week will include a bill raising the hourly minimum wage to $11.25 next January, followed by increases of $1.25 in each of the following three years. The schedule matches that of Massachusetts, the goal set by the Connecticut legislature’s Progressive Caucus.

“Working families are central to our state’s success, and we need to do more to support their long-term financial stability,” Lamont said.

Lamont, a Democrat who took office on Jan. 9, is rolling out legislative proposals and his general approach to the budget, setting the stage for a budget address to the General Assembly that will frame his plans for attacking a structural deficit largely caused by decades of failing to make adequate contributions to the state’s pension funds.

He faces some of the same challenges as his predecessor, Gov. Dannel P. Malloy, a Democrat who took office eight years ago facing an inherited budget deficit of nearly $3.7 billion and a stagnant economy. Lamont announced a “debt diet” Tuesday, promising to limit borrowing as he tries to stabilize the state’s finances.

Lamont, a wealthy Greenwich businessman, was elected with the support of the Connecticut AFL-CIO and the cross-endorsement of the union-funded Working Families Party, which advocates higher taxes on the wealthy, as well as the minimum-wage and family-leave bills Lamont says he will deliver next week. But Lamont is hewing to his campaign position of opposing raising the income tax rate.

“Guaranteed paid family and medical leave and a $15 minimum wage are substantial progress and does a lot to address inequality and financial insecurity in this state,” said Lindsay Farrell, the executive director of the WFP. But she was measured in her praise, an acknowledgement that progressives are likely to be lukewarm, at best, about the budget.

“This budget is a root canal, no matter what,” she said. “We would like it…to be painful in a way that would be more equitable.”

While a minimum-wage increase is likely, the prospects for a paid family and medical leave program are less certain. The legislature’s Labor and Public Employees Committee is holding a public hearing Thursday on identical House and Senate bills that would create a leave program.

The program essentially would be a disability insurance policy funded by a payroll tax on workers for a Family and Medical Leave Insurance Trust to be administered by the state. Lamont said Wednesday he would support a tax of one-half of one percent to fund it, the levy in both bills.

But the governor’s statement Wednesday was silent on other aspects of the proposal, such as the percentage of reimbursement for lost wages the policy would offer. Business opponents say the House and Senate bills would be unaffordable, offering 100 percent reimbursement up to $1,000 a week, as compared to 40 percent in Massachusetts.

“The governor and the Office of Policy and Management are engaged in ongoing conversations with key stakeholders to determine the specific parameters for this bill that best support working families and businesses alike,” Lamont’s office said.

Lamont said he also will propose a restoration of a $200 property tax credit that is now limited to seniors and those with dependents.