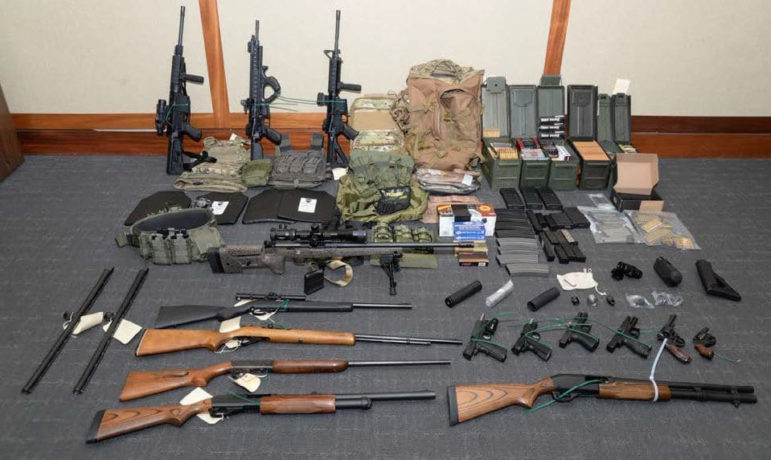 The arsenal of weapons prosecutors say Christopher Paul Hasson was planning to use on politicians and media personalities.

Washington – Sen. Richard Blumenthal was among the targets of a U.S. Coast Guard lieutenant and self-identified white nationalist who is under arrest after federal investigators found a cache of weapons and ammunition in his Maryland home.

Christopher Paul Hasson wanted to “establish a white homeland,” dreamed of ways to “kill almost every last person on earth,” and drew up a list of targets that included liberal Democrats like Blumenthal and CNN and MSNBC journalists, according to court records filed Wednesday in U.S. District Court in Maryland.

“The defendant intends to murder innocent civilians on a scale rarely seen in this country,” prosecutors said in court filings.

“Senator Blumenthal is grateful to the FBI and federal prosecutors for their work on this case and their ongoing efforts to combat violent and hateful extremism,” said Blumenthal spokeswoman Maria McElwain.

The court documents say Hasson, stationed at U.S. Coast Guard headquarters in Washington D.C., “has espoused extremist views for years.” Prosecutors found writings in his computer that mused about the best way to exterminate everyone on earth and say he had been studying a 1,500 page manifesto of right-wing terrorist Anders Behring Breivik, who in 2011 killed 77 in Norway in two attacks.

“I think a plague would be most successful but how do I acquire the needed/ Spanish flu, botulism, anthrax not sure yet but will find something,” the court documents quoted Hasson as writing.

They also say Hasson searched the internet using phrases that included “best places in dc to see congress people,” “are supreme court justices protected,” “most liberal senators,” and “where is morning joe filmed.”

Arrested Friday on weapons charges, the court filings say “the current charges, however, are the proverbial tip of the iceberg.”

“The defendant is a domestic terrorist, bent on committing acts dangerous to human life that are intended to affect governmental conduct,” the prosecutors wrote.

The court filings also detail Hasson’s extensive purchases of the opioid Tramadol and his plans to boost himself with steroids to increase his abilities to conduct attacks.

Hasson will appear in court on Thursday.