Washington – Gov. Ned Lamont, at his first National Governor’s Association winter meeting here, joined other Democratic governors Friday to press for a change in the new tax law that hurts their states, but doesn’t plan to stay for what many believe is a main event at these gatherings – a formal dinner at the White House with President Donald Trump.

This is the second time Lamont declined an invitation to the White House, the first in December as governor-elect, when Trump invited all newly elected governors to a roundtable. While the NGA conference will continue through Monday, Lamont said he plans to return to Connecticut Saturday afternoon because he believes his work here is done.

Lamont said he arrived in Washington D.C. early and “I had all the meetings I wanted to do.”

The White House dinner is Sunday.

During his truncated visit to Washington D.C., Lamont was not idle.

He attended a lunch Friday with Vice President Mike Pence, where the conversation centered on the need for more federal infrastructure spending. Pence promised the governors Congress would pass a “historic” infrastructure bill by next year.

“That was one thing that got bipartisan applause,” Lamont said.

The governor also met with U.S. Small Business Administrator Linda McMahon and said he told her “Hey you live in Connecticut, so why do I have to meet you here?”

Lamont also joined other Democratic governors at Politico’s “State Solutions” conference. He then headed to the Marriott Marquis, where the NGA meeting is held this year, to participate in  a press conference with New York Gov. Andrew Cuomo and other Democratic governors whose states have been affected by the new federal tax law’s cap on the deductibility of state and local taxes.

“It is the art of the raw deal,” Lamont said in a reference to Trump’s slogan. “We are going to stand up and oppose it.”

The limit on the deductibility of state and local taxes, known as SALT, harms taxpayers in states with high wages, high cost of living and high property taxes who itemize their returns and were able, before this tax filing season, to deduct the full amount of those taxes from their federal income. 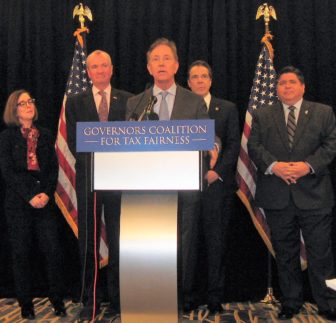 To Cuomo, who dominated the press conference, the cap is aimed at the wealthier, blue states and based on the Trump policy of “divide and conquer.” Cuomo also said the cap hurt states that send more tax dollars to Washington D.C. then they get back from the federal government.

“It adds insult to injury,” he said. “It’s poison for the nation.”

Cuomo is optimistic about legislation introduced by Democrats that would restore the full deductibility of state and local taxes, even as Senate Finance Committee chairman Sen. Charles Grassley, R-Iowa, said he won’t consider it.

“It would be a problem in the Senate,” the New York governor conceded.

Still the blue state governors fighting the SALT cap, which include New Jersey Gov. Phil Murphy, Oregon Gov. Kate Brown and Illinois Gov. J.B. Pritzker, are optimistic they can drum up public and political support for the SALT cap repeal.

Cuomo also thinks Trump “is open” to support the legislation.

To Lamont, the opportunity to meet with other governors facing similar problems allows them “to compare notes and find out how we can work together.”

Just before the NGA meeting started, Trump appointed Lamont to the 10-member Council of Governors, which has a two-year term. The bipartisan council serves as a mechanism for governors and key federal officials to address matters concerning the National Guard, homeland security and defense.

Lamont said the appointment “allows me to get to know the folks at the [Defense Department]” something that will help him look out for military interests and the defense industry in the state.