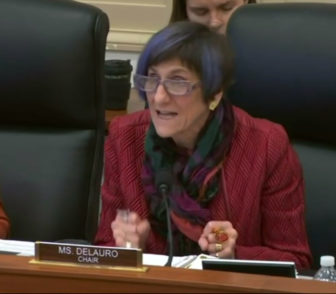 Washington – Rep. Rosa DeLauro on Wednesday began an investigation aimed at determining how thousands of immigrant children who come to this country on their own, mainly from Central America, are being treated by the Trump administration.

“Are the actions of the administration producing government-sanctioned child abuse?,” DeLauro asked in her opening statement at a hearing Wednesday before the House Appropriations subcommittee.

DeLauro is the new chairman of that panel, which helps determine the budget of the Department of Health and Human Service, the federal agency responsible for the care of immigrant children.

She said the law requires the HHS Office of Refugee Resettlement to “promptly place children in the least restrictive setting that is in the best interest of the child” and promptly reunify them with parents or family members.

But that isn’t happening, DeLauro said. Instead, unaccompanied children have become pawns in the Trump administration’s crackdown on immigration and have been subjected to abuse and sexual assault.

“That can’t happen on our watch,” said DeLauro, who as a subcommittee chairman is part of the House Democratic effort to investigate Trump administration policy.

She said her committee has the responsibility of investigating reports of abuse and sexual assault of hundreds of children detained at facilities with HHS contracts, especially several-for-profit entities.

On Tuesday, documents were produced at another House hearing that showed more than 4,550 allegations were reported to the Office of Refugee Resettlement between fiscal years 2015 and 2018.

During the same period, about 1,300 sexual abuse allegations were reported to the Department of Justice, according to the documents. Nearly 180 involved allegations of staff committing sexual abuse against migrant children at government-run shelters.

DeLauro said she had requested that two senior HHS officials with authority over unaccompanied migrant programs testify at her hearing.

“We wanted to ask them key questions because my colleagues on both sides of the aisle need to assess about the treatment of unaccompanied children, the effect of the family separation policy, the costs, and more,” DeLauro said. “Unfortunately, the administration declined to make these senior officials available.”

Michelle Brané, of the Women’s Refugee Commission, and others, did accept the committee’s invitation to testify.

She said several Trump administration policies have led to longer stays in custody and lack of appropriate facilities to house the migrant children, including the policy of separating children from their parents at the border. Children are usually released to family members but many of these people are being deported, Brané said, under the administration’s more aggressive deportation policies.

She also said the Trump administration ended the Central American Minors program, which allowed youth to apply for asylum in their home countries, instead of at the U.S.-Mexico border. 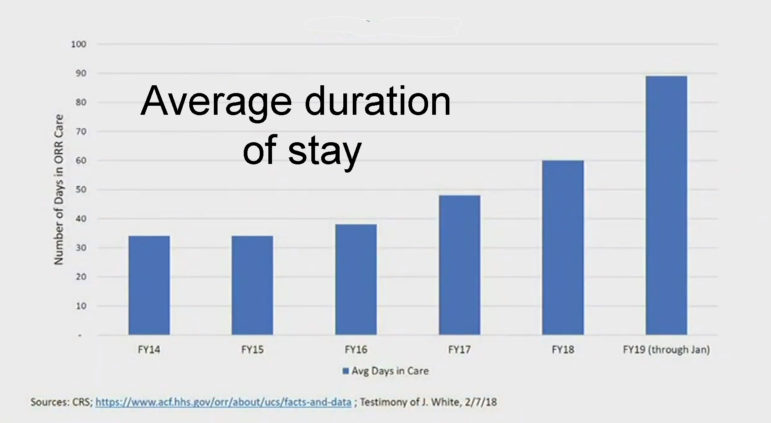 A chart submitted as evidence Wednesday shows the average length of a migrant child’s stay in U.S. custody.

J.J. Mulligan, an attorney with the University of Davis School of Law’s immigration clinic, testified about harsh conditions at unlicensed child migrant detention center, including the purposeful cranking up of air conditioners to make the centers frigid.

“The kids are freezing all day,” Mulligan said.

Since the Immigration Law Clinic was a co-counsel in the Flores settlement that established federal policy for handling undocumented minors, Mulligan said he has access to the children.

“The children we interviewed described policies and practices that prolonged their detention—everything from requiring a backup sponsor in case the original sponsor is deported, to requiring entire households of roommates with no connection to the child to be fingerprinted,” he said. “As one child told us, ‘Who is the federal government to decide if my parent is good enough or not?’”
Democrats on the panel said the influx of migrant children is a result of the violence in Central America, largely a byproduct of the drug trade.

Republicans on the panel, meanwhile, said many of the immigrant children seeking asylum in the United States were actually seeking  better jobs, and others are criminal gang members.

“It seems that our policy should be to discourage, as much as we can, unaccompanied children,’ said Rep. Andy Harris, R-Md., who said he did not want any more M-13 gang members in his home state.

Andrew Arthur, a fellow at the Center for Immigration Studies, an anti-immigration think tank, cited a study that ranked the Honduran town of San Juan de Sula less dangerous than Baltimore or St. Louis.

That testimony rebuke from Rep. Mark Pocan, D-Wis., who told Arthur his remarks were “bizarre” and said there is no comparison between the violence in American cities and Central America.

“I don’t think your testimony did you a great service,” Pocan said.