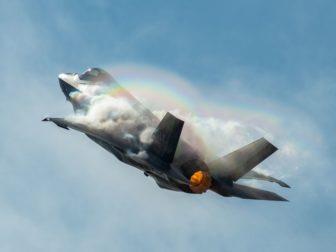 Washington – Connecticut’s congressional delegation on Wednesday asked the Pentagon to drop plans to cut the number or F-35’s built in the next federal fiscal year.

At a cost of about $8 billion, the  Pentagon is expected to request 78 F-35s, which are built by Lockheed Martin. That’s down from the 84 fighter jets the Defense Department had  projected for 2020.

But the Pentagon’s reduction of six Joint Strike Fighters in its latest budget request isn’t the end of the story. Congress must approve the Pentagon’s budget, and usually puts its own stamp on it.

This year, for instance, Congress appropriated $9.34 billion for 93 F-35s, 16 more than the Pentagon requested. The year before, lawmakers added 20 F-35s to the Pentagon’s request.

Still, the Connecticut congressional delegation wrote to Acting Defense Secretary Patrick Shanahan asking him to go back to his original projection of 84 fighter jets for 2020.

“Cutting our only fifth generation fighter jet for any military service would be a mistake, and we urge you to reconsider this decision or provide immediate justification for this potential cut,” delegation members wrote Shanahan.

They also said “the F135 engine is the most powerful propulsion system and most advanced engine developed for a fighter aircraft,” and that the F-35 program “employs over 11,000 Connecticut constituents directly and indirectly–with 78 first-tier suppliers and other statewide suppliers that provide parts to primes.”

The Pentagon’s budget request will also ask for eight new “advanced” F-15 jets—to be used by the Air Force and the Air National Guard. Those fighter jets are built by Boeing, whose engines are made by General Electric.

The new F-15s, which are not “stealthy” like the F-35s, would likely fly low-risk homeland-defense patrols over the United States. With their stealth features, the F-35s would deploy overseas for major combat against high-tech enemies.

The Pentagon is expected to ask Congress for  $750 billion, an increase over the $733 billion requested last year.

That budget would exceed spending caps, but the White House plans to boost the amount of money requested for the overseas contingency operation funds, and is a separate pot of money the Defense Department usually uses solely to conduct wars, that is not subject to budget caps.