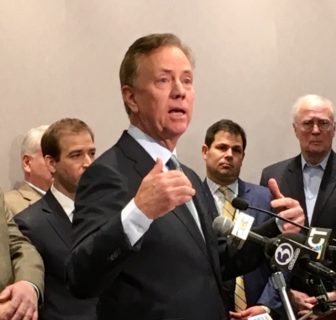 Gov. Ned Lamont wants to explore tapping private investors to finance at least some of the hundreds of millions of dollars needed to install electronic tolling on its highways.

Echoing a proposal raised earlier this year by Sen. Alex Bergstein, D-Greenwich, Lamont said he believes the private sector is anxious for Connecticut to rebuild its aging, overcrowded transportation infrastructure, and some investors are ready to back that up with their wallets.

“We could put in place, probably, a public-private partnership so … we wouldn’t have to up front all of that (toll installation) cost,” Lamont said while speaking to the Connecticut Council on Philanthropy at the Hartford Hilton Thursday morning. “This is the way I’m envisioning it right now.”

A November 2018 study from the Department of Transportation projected capital start-up costs for tolls at about $372 million. This includes both roadside work, tolling equipment and fiber optic cable to support 82 tolling gantries. The Lamont administration has estimated capital costs at $213 million and projected 53 gantries would be needed. It’s not clear whether cost projections would be revised if legislators vote on a tolls measure later this year.

Lamont said after Thursday’s address that while the concept of a partnership is still being developed, he’s confident about its potential.

“There’s real interest” within the private sector, he said, adding that Connecticut has many advantages that would appeal to private investors.

Lamont said his two-year budget proposal before the legislature would close deficits and provide a “recurring, reliable, predictable set of revenues” for the transportation program over the next three years.

And if legislators approve his proposal for electronic tolling, the state could be in position to receive up to $800 million annually from tolls starting in 2023. The Lamont administration estimates about 40 percent of that would come from out-of-state motorists, though Republican legislators argue the share from outside Connecticut would be much less.

Connecticut also has a skilled, construction workforce ready to tackle the rebuild, Lamont added, and a pressing need for highway, bridge and rail upgrades after decades of inadequate investment.

Public-private partnerships have been a source of intense debate in other states since the mid-2000s. Private groups that help finance transportation work understandably want a return on their investments in the form of a share of toll receipts.

In some instances, public assets — roads, rail lines — are leased or sold to the private sector. But Lamont proposed nothing along those lines Thursday.

Proponents argue this approach has enabled states to dramatically accelerate the rebuild of their transportation networks. Critics counter that if the numbers aren’t crunched properly, motorists ultimately pay the price with higher tolls.

For example, Indiana approved a 75-year lease of the Indiana Toll Road for $3.85 billion in 2006. Within eight years the project amassed $5.8 billion in debt.

“We’re going to be smart about how we do these things,” the governor said.

Bergstein, who is vice chairwoman of the legislature’s Transportation Committee, has proposed an “infrastructure bank” program to leverage private dollars for a wide variety of transportation infrastructure work — not just installation of tolls.

Bergstein told the CT Mirror in mid-January that she believes private-sector support for a transportation rebuild is huge, and that Connecticut could leverage huge private dollars.

How much? Possibly $7 to $9 of private-sector money for every $1 the state pledges, she said.

“It is about unlocking this enormous pot of private-sector money that we are not accessing now,” she said.