Connecticut reopens debate over its role in deportations 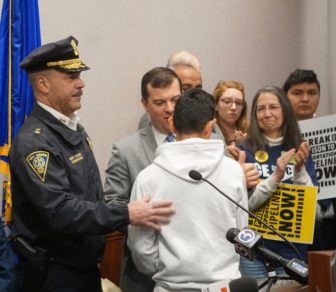 The tension over Connecticut’s proper role in enforcing immigration law returned Friday to the State Capitol, where legislators considered ways for the state to limit deportations, and an immigration rights group complained that some Superior Court marshals were too aggressive in assisting U.S. Immigration and Customs Enforcement in deportations.

Connecticut passed “Trust Act” legislation six years ago that attempted to set clear rules for law enforcement officials dealing with undocumented immigrants, primarily by prohibiting their detention in the absence of a threat to public safety, an outstanding arrest warrant or a final order of deportation.

Citing research by an immigration clinic at the Yale Law School, the Connecticut Immigration Rights Alliance complained Friday that some judicial marshals, who provide security at state courthouses and lock-ups, enforced civil immigration detainers in possible violation of the 2013 law.

A single marshal was responsible for enforcing more than half of ICE detainers over a one-year period reviewed from September 2016. But the group’s report indicated that 45 of the 50 persons detained for ICE were under a final order of removal, one of the criteria allowed in the 2013 law.

More troubling were some of the emails obtained under the Freedom of Information Act in which one marshal, who apparently lacked grounds to detain an immigrant, promised an ICE agent to “stall his release until you are on site.”

“There is a screening tool that’s used by the marshal in the field,” Murphy said. “The decision to detain or release is made in the head administrative office.”

The legislature’s Judiciary Committee held a public hearing Friday on four immigration bills, including one proposed by Republicans to require more cooperation with ICE, not less. The others were geared to help immigrants avoid deportation.

One bill would provide legal representation in deportation cases. A second would reduce the current maximum sentence of one-year for a misdemeanor by a single day. Crimes punishable by a year or more in prison can trigger a deportation under federal immigration law.

A third would strengthen and clarify provisions of the 2013 “Trust Act” by prohibiting state and local law enforcement from acting on ICE detainers without a federal judicial warrant.

“The 2013 Trust Act falls far short of many of the policies adopted by other states and municipalities in years since,” said Iva Velickovic, a Yale law student and member of the school’s immigrant rights clinic. “Many states have surpassed Connecticut in restricting enforcement of such detainers.”

“ICE detainer requests are just that: requests,” said David McGuire, the executive director of the American Civil Liberties Union of Connecticut. “They do not carry the weight of a warrant, and they provide no legal obligation or even justification for local law enforcement to detain, arrest or jail someone.”

Sen. Rob Sampson, R-Wolcott, one of the sponsors of the bill that effectively would repeal the 2013 law, said the Democratic measure expanding the act was a threat to public safety.

“If this became law, it would expand an already dangerous and illegal policy into something far worse and will lead to the loss of life of Connecticut citizens,” Sampson said.

The Trump administration, however, has not included Connecticut among the jurisdictions whose handling of ICE detainers has been deemed illegal.

Immigrant rights’ advocates held a press conference Friday in support of the three pro-immigrant bills, reviewing cases where they say immigrants were detained on questionable grounds

He told Gerardo Roblero, who shared the story of his father being turned over to ICE for deportation to Mexico by judicial marshals, “I’m sorry that you and your family had to go through that.”

4 thoughts on “Connecticut reopens debate over its role in deportations”