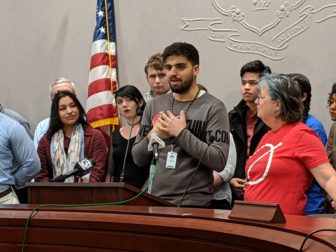 Mahmoud Mazloum, a student at Norwalk Community College, speaks out against plans to consolidate the community college at a news conference Friday.

Several dozen professors, students, and others gathered in Hartford Friday to protest a cost-saving plan to consolidate the state’s community colleges, appealing to Gov. Ned Lamont and lawmakers for help.

After a news conference at the Legislative Office Building, students and others in the group marched their petition against the consolidation — with 1,300 signatures on it — to Lamont’s office in the state Capitol and asked for meeting with him.

“We are here to respectfully ask Gov. Ned Lamont to stand up and step in,” said Elle Van Dermark, a faculty member at Asnuntuck Community College, which is one of the 12 colleges in the Connecticut State Colleges and Universities system. “He promised leadership and we are here asking him to deliver on that promise.”

“Consolidation is a radical and ill-advised plan that collapses 12 unique and independent colleges into a single, monolithic entity,” Van Dermark added. “An undertaking of this magnitude has never been successful.”

Rob Blanchard, a spokesman for the governor, told the group that he would work with staff to try to schedule a meeting with the governor.

The governor’s office issued a statement saying Lamont’s “primary focus is to ensure we cut costs without sacrificing the high quality education our Connecticut schools provide. He understands there are strong feelings on all sides of this issue and looks forward to working with CSCU, students, faculty and other stakeholders to ensure our students are supported and ready to live and work right here in Connecticut.”

Many of the faculty at Friday’s news conference have been opposed to the consolidation plan since CSCU President Mark Ojakian proposed it a couple of years ago, but now that Ojakian is moving forward with hiring and organizational efforts to accommodate the consolidation of the 12 colleges into a single statewide college, opponents say it is urgent that they speak up.

The original plan for the merger — called “Students First” — was turned down by the accrediting agency almost a year ago. CSCU is now working on a new plan, with the goal of consolidating completely in 2023.

In the meantime, Ojakian has plans to hire top executives who have statewide or regional responsibilities. That includes three regional presidents who are expected to be hired in April with salaries ranging from $139,800 to $223,700.

Ojakian said recently that his goal is to have the colleges operating “for all intents and purposes” as one college by the time he submits the next application. He expects that will make the application process less difficult.

Ojakian has framed the consolidation as necessary to put the struggling system — which could face a budget gap as large as $57 million next year — on firmer, more sustainable financial footing. He says it will save $23 million annually in administrative costs, starting in 2023, and the savings will be invested in services to help students stay in school and graduate.

Faculty members said that with a new governor in place and many new legislators, they are hopeful their protests will be heard.  As Central Connecticut State University professor Matthew Warshauer explained, Ojakian was close to Gov. Dannel P. Malloy and had worked with him for years, most recently as his chief of staff before moving to the state university system.

Warshauer and other faculty members hope that Lamont will review the plan with fresh eyes.

The faculty members are also heartened that the legislature is again considering a bill that would require the General Assembly to approve any plan to consolidate or close a public college or university. The bill was approved by the Education Committee last year, but never made it to the floor of either chamber.

“We are here asking the legislature to halt the hiring of new regional presidents, which will siphon important tax dollars away from educating students,” Van Dermark said. “This plan fails students, fails faculty and fails staff at the most accessible institutions in the state.”

Faculty members said they fear that if those regional presidents are hired, it will be all the more difficult to stop the consolidation plan. 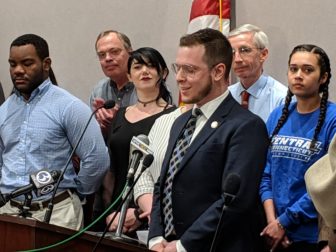 David Schultz, an alumnus of Manchester Community College, says he thinks consolidating the colleges hurt the “substance and spirit” of the individual colleges.

David Schultz, one of the students who spoke and an alumnus of Manchester Community College, said he fears that consolidation will strip the college of its identity, removing “substance and spirit from the school.”

“It is difficult to have school pride when your school’s identity has been forcefully torn away and replaced with a new external identity,” he said.

The faculty and students contend in their petition that the merger won’t save money, that it may lead to a loss of accreditation for various reasons, that it will increase bureaucratic red tape, rob the colleges of their individual identities and hurt student enrollment and retention. They also said they feel that Ojakian and others implementing Students First haven’t listened to them and have proceeded in a top-down manner.

A statement from CSCU spokesman Leigh Appleby said Students First is necessary to ensure students are better prepared for 21st century jobs and to save money and put the system on a “more sustainable financial footing.” He also said that more than 250 faculty members, staff and administrators have engaged in a “collaborative, transparent process” to align curriculum and take other steps needed to implement Students First.

“There has not always been agreement, but the process has been anything but top-down,” Appleby said.

One thought on “Faculty, students protest consolidation plan for colleges”