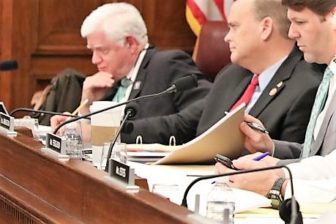 Washington – Rep. John Larson’s plans to revamp Social Security were met  on Tuesday with push-back from Republican colleagues who lauded his attempts at bipartisanship but did not like his plan to increase a tax that funds the program.

Larson, D-1st District, has been soliciting GOP support for his Social Security 2100 Act, a bill has introduced three times since 2015.

The legislation had not had an official airing until Tuesday, when Larson, the new chairman of a Ways and Means subcommittee with authority over Social Security, wielded the gavel on a hearing on his legislation. He once again asked for bipartisan support.

“What they despise the most about the Congress is the dysfunction they normally see; when they see people going to their respective corners and are unwilling to get anything done,” Larson said in his opening remarks. “But, what I see in this group on this dais are people who are prepared to roll up their sleeves and get after a solution to a problem.”

Democrats at the hearing supported Larson’s plan. Republicans said they shared Larson’s belief the Social Security program, which is projected to suffer shortfalls in funding in 2034, needs reform.

However, they differed with Larson on what those reforms should be.

The Social Security 2100 Act would boost Social Security benefits for all recipients, providing the biggest increase  to those who are now receiving the smallest benefits, and would establish a more generous cost-of-living adjustment.

Larson’s bill would also raise the cap on tax-free Social Security benefits, to $50,000 for individuals and $100,000 for married couples.

But to pay for the more generous benefits, the Social Security 2100 Act contains tax increases.

Larson’s plan would also slowly increase – over a 24-year period — the Social Security tax paid jointly by workers and their employer, from the current 6.2 percent to 7.4 percent of a person’s wages.

One witness, Joseph Semprevivo, president of Joseph’s Lite Cookies, said small businesses can’t afford an increase in the tax, which Larson has compared to the cost of a Starbucks coffee.

“It is a tax and it’s going to affect the ability to hire employees,” Semprevivo said.

Semprevivo also said “if you asked other middle-class tax payers ‘How would you feel about another tax increase,’ they would say they are taxed enough already.”

A frustrated Rep. Bill Pascrell, D-N.J., retorted “every time we have a problem… the answer is ‘economic growth will take care of the problem.’”

Advocates for the elderly, especially those who are minorities, praised Larson’s plan.

Although the AARP hasn’t endorsed the bill, it lauded its goal of  boosting the Social Security benefits of low-income workers and gave anecdotal evidence of how the program is a lifeline for many who have little of no other retirement income.

AARP Board Chairman Joan Ruff, for instance, told of Lottie Prushinski, of Southington, whose monthly Social Security check has allowed her to live with “dignity and financial independence.”

Kate Farrar of Connecticut Women’s Education and Legal Fund testified that two-thirds of those in poverty over 65 are women.

While Larson may win support for his bill in the Ways and Means Committee, which has a Democratic majority, and in the Democratic led U.S. House, Rep. Tom Rice, R-S.C., predicted it would not make it into law because the Senate, still in GOP hands, would reject it.

“Even if the House passed it, it would not go further than that,” Rice said.