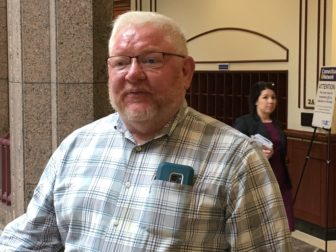 When he went to the Mohegan Sun casino to prove he could quit — and instead lost more than he could afford — he knew he couldn’t stop without help. So he sought it.

And when he awoke Tuesday — after more than three years of gambling sobriety — he knew he had to share his story with legislators pondering a significant expansion in gaming in Connecticut.

“This doesn’t define me,” Morgan, said of his problem gambling past. “I’m not letting this be the measure of my life.”

Morgan returned to the Capitol Tuesday as the legislature weighs an array of proposals this year that could dramatically expand gaming.

Those options range from a new tribal casino in East Windsor to online lottery sales to new fees on sports betting legalized last year by a U.S. Supreme Court decision.

Lawmakers also are considering ordering a new study on problem gambling — something Connecticut’s lawmakers have deferred since since the first tribal gaming facility, Foxwoods Resorts Casino, opened in 1992.

“I was going to be the last person to believe I had a gambling problem,” Morgan told the CT Mirror in an interview shortly before he testified before the Public Safety and Security Committee. “I was the typical Type A personality. I rationalized. I thought I could control the monster.”

The West Hartford resident served on the Capitol police force from 1985 through 2006, spending his last six years as chief. But when he retired in 2006, “when I had time on my hands, I found I still needed to strive to do things,” he said.

When buying gasoline or making other purchases at convenience stores, Morgan would take lottery tickets in lieu of change. Eventually lottery ticket purchases became a daily occurrence and Morgan started going to Mohegan Sun, usually once a week, to play Black Jack of Roulette.

Morgan said he, like many police and fire personnel, struggled with stress management, and for years felt he needed to solve his problem by himself.

“If I could just win enough, it will all go away,” he said, describing his thinking at the time.

The former chief chose not to disclose specifics about the amount of money he lost, saying only that it involved “significant amounts of money” and that his behavior contributed to credit card debt he still owes.

The low point came in November 2015 when he went to Mohegan Sun “to prove I could stop gambling — and I didn’t.” On the ride home he realized he needed help, and found immediate support in a phone call to his brother.

“I started to look at it differently,” he said, adding that his wife and daughters have been extremely supportive — and weren’t entirely surprised to hear him say gambling had become an addiction.

Morgan, who since has been trained as an addiction recovery coach, urged lawmakers to dedicate 25 percent of any new revenues from gambling to treatment services.

“My illness doesn’t have a pill to take,” he told legislators. “My health and wellness comes from my counseling.”

Morgan added that “I have recovery and it’s fleeting,” noting that it only takes one lottery ticket purchase to bring his recovery right back to square one.

A significant percentage of suicides are linked to problem gambling, Morgan said. “When you think you are worth more dead than alive, suicide is something that you think about,” he said.

Sen. Tony Hwang of Fairfield, the ranking GOP senator on the public safety committee and one of the legislature’s most vocal opponents of gaming expansion, praised Morgan for sharing a story that should frighten everyone.

Others who testified Tuesday also urged more money for treatment, but said Connecticut first must face the scope of its gambling problem. 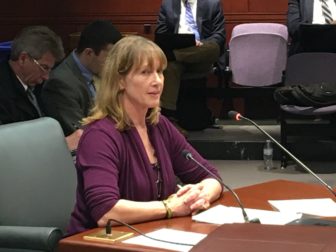 The state last launched a gambling study in 2008. And though legislators gave themselves 10 years for the next one, they still missed their 2018 deadline, waiving it when they budgeted no funds for a new analysis.

“Problem gambling is also increasing at an alarming rate among our youth, due in part to the increasingly blurred lines between video-gaming and gambling, said Diana Goode, executive director of the Connecticut Council on Problem Gambling.

As much as 3 percent of the adult population, about 35,000 Connecticut residents, admits to currently having a gambling disorder and 287,000 are at risk of developing one during their lifetime, Goode said.

Michele Mudrick, director of the Coalition Against Casino Expansion in Connecticut — a grassroots, faith-based collective — urged lawmakers to avoid a key flaw in the last study.

The 2008 analysis was prepared by Spectrum Gaming Group, whose executive testified that he had also performed work for the tribal casinos.

The next report “must be performed with no conflict of interest or bias,” Mudrick said. “We recommend hiring an independent expert or experts who can give our state a true picture of the social and economic costs of casinos.”

But others said the state could add expand gaming in some ways in a responsible fashion.

Greg Smith, president and CEO of the Connecticut Lottery Corporation, asked legislators to allow lottery ticket sales and sports betting through its website.

The corporation projects revenues could grow $50 million over the next five years combined, with no loss of business to retail merchants. That’s because online sales should increase overall interest in lottery ticket purchases. 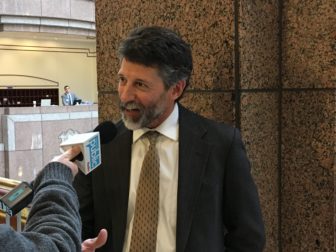 Greg Smith, president and CEO of the Connecticut Lottery Corporation

Still, Smith said, there are are numerous responsible gambling provisions.

There would be no online scratch ticket sales.

The problem gambling helpline would be displayed throughout the lottery website, and pop-up reminders would appear if visitors stay on the purchasing page too long.

Individuals also would be limited to one debit or credit card to purchase tickets online, and there would be a time limit to buy tickets.

“The responsible gaming controls related to the lottery are far more stringent than anything we can do at retail, and they are applied on every purchase,” Smith said.

But Morgan said if Connecticut wants to treat problem gambling, it must be prepared to invest some of its gaming receipts in treatment.

As a police officer, “people didn’t expect me to have a problem, or to need help,” Morgan said. “I did. If I can tell people that, if I can make a difference, I can sleep at night.”