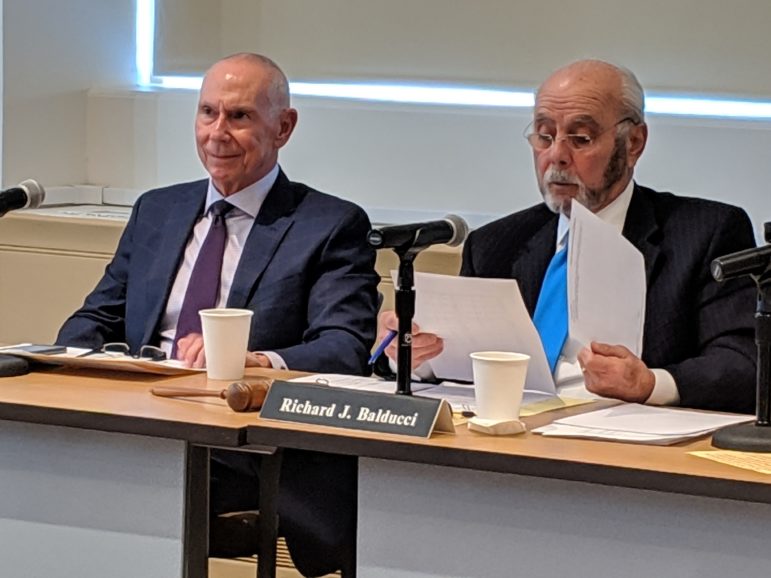 CSCU President, Mark Ojakian, and Richard J. Balducci, chairman of the finance committee for the Board of Regents for Higher Education, discuss a 5 percent tuition increase for the state universities.

The Board of Regents for Higher Education’s finance committee voted Wednesday in favor of a proposal to increase tuition at the state universities, but held off making a decision about the community colleges in case additional state funds become available.

“I want to take a little more time to gauge the legislative interest in additional funding,” for the community colleges, said Mark Ojakian, president of the Connecticut State Colleges and Universities. “The community colleges are in a much more precarious position financially.”

The full board will vote on the proposed increase for the state universities at its March 28 meeting.

Ojakian said the state universities need to know their tuition rates for next year because they are assembling financial aid packages for the 2019-2010 school year now, but he can hold off on the community colleges because students generally enroll later in the year.

Ojakian expects that his staff will have a proposed tuition increase for the community colleges next month. Community college students paid 2.5 percent more in tuition this year compared to last year.

With a tuition increase proposed for the state universities, coupled with increases in fees, room and board, an in-state student who lives in a dorm at Central Connecticut State University in New Britain would pay $804 more next year to attend college. This year, that student pays $22,791 in tuition, fees and room and board. A commuting student who lives in Connecticut would pay $452 more next year to attend Central.

The costs are a bit higher at the other three universities, with the highest at Southern Connecticut State University in New Haven, where in-state residential students will pay $899 more next year, including fees and room and board.

“It continues to be the mission of this board and of myself that we ensure that the university remain the most affordable and accessible option to obtaining a four-year degree in the state of Connecticut,” Ojakian said. “I’ve always said tuition (increases) needed to be considered as a last resort and that I want to assure everyone that we’ve done everything possible to make sure the increase is as manageable as possible for our students.”

The financially troubled Connecticut State Colleges and Universities system, which includes the four state universities and 12 community colleges, would face a $57 million shortfall next year if tuition and the state investment in the system stays flat.

“We are asking students to invest a little more in their education.”

If CSCU were to attempt to balance the budget just on the backs of the students, Ojakian said, its state university students would be facing a tuition increase of 12 percent.

The percentage increase for state university students is less than the increase that will be paid by UConn students. As part of the last year of a four-year schedule of tuition increases, UConn students will face a 7.3 percent increase in tuition next year.

However, if fees are included, that percentage increase jumps to 9.5 percent. That’s because students next year have to pay a $500 fee for the school’s $100 million recreation center, which is scheduled to open in September.

Students are expected to pay that fee each year for the next 30 years.