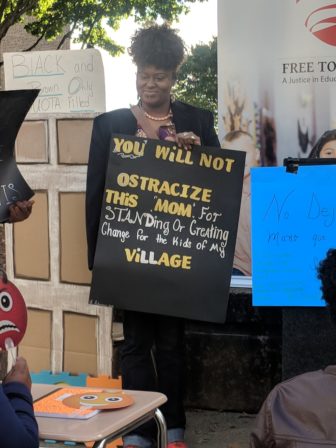 LaShawn Robinson, the lead plaintiff in the lawsuit challenging the state’s magnet school lottery, holds up a sign outside the court house before the hearing.

A civil rights case alleging that the state’s lottery system for high-performing magnet schools is discriminatory will be heard in federal court, a judge ruled late Thursday.

The case could upend decades of efforts on the part of the state to desegregate Hartford schools.

U.S. District Judge Stefan R. Underhill denied the state’s attempt to have the case heard by the Connecticut Supreme Court, and rejected a request from civil rights attorneys, acting as intervenors, to have the federal court abstain from hearing the case to allow the lawsuit which led to the establishment of the lottery system in the Hartford region, Sheff v. O’Neill, to proceed in state court.

Underhill also denied the intervenors’ attempts to have the case dismissed for a lack of legal standing.

At issue in the Robinson v. Wentzell case is whether the lottery’s algorithm — which is designed to limit enrollment of black and Hispanic students in a magnet school to 75 percent to ensure students in those schools are not racially isolated — is discriminatory and therefore violates the U.S. Constitution.

The parents who brought the case in federal court with the help of the Pacific Legal Foundation take issue with seats being left empty in some magnet schools when not enough white students apply.

“I think it’s awesome for the kids in Connecticut,” LaShawn Robinson, the lead plaintiff in the case, said Friday. “I’m super-excited that someone is giving the parents the opportunity to tell their stories, to look into our lives and see that we want equitable funding for our children.”

Robinson has two older children who never won the lottery and therefore never got into the magnet schools they hoped to attend. The effect on her oldest son was particularly devastating, she said, and sent him into a depression after he was first on the waiting list for several years and still wasn’t admitted. She has three younger children who did win the lottery and are in magnet schools.

“Both the state and Sheff intervenors tried to have this case thrown out of court on a variety of grounds. The court rejected all of them,” Thompson said. “While this is only the first battle in what is sure to be a long fight, we are committed to defending our client’s right to equal protection of the laws as far as we need to.”

Elizabeth Benton, spokeswoman for the state attorney general’s office said, “The case remains at its earliest stage and we will continue to vigorously defend the state’s interest in equity in education.”

“I’m super-excited that someone is giving the parents the opportunity to tell their stories, to look into our lives and see that we want equitable funding for our children.”

Sheff advocates said the ruling will not impede their efforts on behalf of desegregation.

“The crucial, hard-won progress of Sheff is not something that the court should allow to be erased by the Pacific Legal Foundation’s lawsuit,” said Cara McClellan, an attorney with the NAACP Legal Defense and Educational Fund, Inc.  “The judge has not yet had an opportunity to consider the facts at this preliminary stage. We will proceed to discovery.

“This will not alter our efforts to protect Sheff’s promise of education equity throughout Connecticut,” McClellan added. “We look forward to defending equal justice under the law and every child’s right to high-quality, integrated schools.”

Elizabeth Horton Sheff, an education activist and a named plaintiff in the Sheff v. O’Neill case, said this “is only the first step in this legal battle.”

“This ruling doesn’t change the value of providing each child an integrated education,” Horton Sheff said. “Even with the progress we’ve made in the last 20 years, Hartford has a long way to go before it meets its obligation to give every student the chance they deserve. We will continue fighting.”

The network of 40-plus magnet schools in the Hartford region were opened in response to the Connecticut Supreme Court ruling in the Sheff case 23 years ago. That ruling held that minority students in Hartford “suffer daily” from the inequities caused by the severe racial and economic isolation in the schools.

The state also pays for dozens of other magnet schools to operate in Bridgeport, Stamford, Waterbury and other parts of the state. The same 75-25 goal applies to those schools, as well.

The state has contended that the 75-25 standard is not a “quota” as the plaintiffs allege, noting that several schools have exceeded the 75 percent threshold of black and Hispanic enrollment.

At the heart of the case is a difference in philosophies about whether segregation contributes to poor educational outcomes — and whether the magnet schools would remain high-performing if they were to have race-blind lotteries.