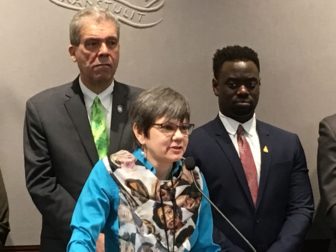 The state House of Representatives’ Progressive Democratic Caucus intensified its push Friday for higher income taxes on the wealthy to mitigate Gov. Ned Lamont’s sales and sin tax proposals, which would hit the poor and middle class the hardest.

The caucus, which includes 43 House Democrats, also said Connecticut should increase its income tax credit for the working poor and maintain the gift tax.

“We’re looking at fair, creative, and equitable solutions to rebuild, reinvest, and renew Connecticut’s commitment to working families and modest income earners,” said Rep. Anne Hughes, D-Easton, co-chairwoman of the caucus. “It will take moral courage to implement the systemic measures needed to create a new era of corporate responsibility and fair taxation in our state.”

“The Progressive Democratic Caucus is committed to equitable solutions,” said Rep. Quentin Phipps, D-Middletown. “Connecticut’s budget has the opportunity to empower families by relieving the burden of nickel and dime taxation and embolden those with considerable means to pay their fair share.”

One of the chief solutions the caucus recommended involves setting a new top rate on the state income tax, and also setting a special rate on capital gains.

Caucus members said specific rate proposals still are being developed but they want to add approximately one-half of 1 percentage point to the top income tax rate of 6.99 percent. The top rate currently applies to individuals earning more than $500,000 per year and couples topping $1 million.

The caucus estimated this would raise about $227 million in new annual revenue — about 93 percent of which would fall on the top 1 percent of state income taxpayers.

Caucus members did not recommend a specific rate on capital gains, but Hughes said that could be a vital tool to funnel some of Connecticut’s wealth into helping some of its most vulnerable citizens.

“We noticed that was glaringly absent from the governor’s budget,” Hughes said. “There is nothing being asked on the wealth of Connecticut.”

The state has not imposed a separate rate on capital gains since 1991 — though it had for two decades prior to that.

But since the state income tax was enacted 28 years ago, all income — job salaries, capital gains, dividends, interest, and other earnings — have been taxed in the same way.

According to a 2018 report from the legislature’s nonpartisan Office of Fiscal Analysis, a Connecticut household earning $96,000 per year generates less than 10 percent of its income from investments.

For a household making more than $2 million per year, the average share approaches 79 percent.

Friday’s press conference marked the second time the caucus has pushed back against Democratic Gov. Ned Lamont since his Feb. 20 budget proposal.

Lamont has taken a hard line against income tax hikes 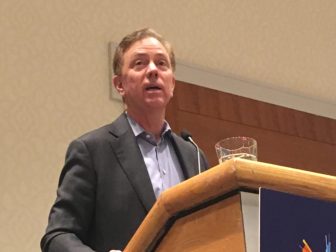 Lamont has taken a hard line against raising income tax rates or tapping the emergency budget reserve to close a major projected shortfall in state finances.

Analysts say spending, unless adjusted, will exceed revenues by $1.5 billion to $1.7 billion next fiscal year, and the potential gap grows to $2 billion in 2020-21.

Lamont believes raising the income tax would threaten a state economy that, while strengthening, still remains somewhat fragile from the last recession and a sluggish recovery.

The governor’s plan to close the deficit relies, in part, on tax hikes, but they are aimed chiefly at low- and middle-income households. He wants to eliminate dozens of sales tax exemptions, raising more than $500 million annually by the 2020-21 fiscal year.

Lamont also proposed a new 75 percent tax on electronic cigarettes, a 10-cents-per-bag levy on plastic bags, and a 1.5-cent-per-ounce tax on sweetened beverages.

As an alternative, caucus members suggested increasing income tax burdens on the wealthy and corporation taxes on major companies.

The caucus also opposes the governor’s recommendation to end the gift tax — a levy designed to limit how much money households can provide annually to their children.

Households must pay a Connecticut gift tax if their gifts exceed a lifetime limit of $3.6 million. The limit recently was raised. Last yar it was set at $2.6 million.

Any sin tax hikes should be offset with increased state funding for poor communities.

Lamont didn’t propose legalizing and taxing recreational marijuana use, but three legislative committees are raising bills to begin that process. And the progressive caucus said a portion of any revenue stream from marijuana must be reserved for drug treatment and education programs.