Solidarity in a Connecticut mosque, and polarization 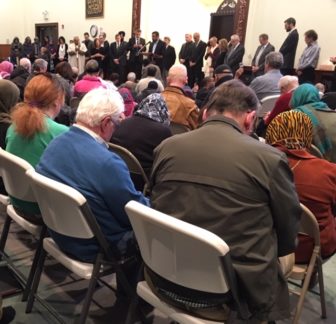 An interfaith audience bows in prayer at the end of a vigil at a mosque in Berlin.

Berlin — At a solemn interfaith vigil called at a suburban Hartford mosque Sunday in response to the massacre of 50 Muslim worshippers in New Zealand, political and religious leaders repeatedly rebuked President Donald J. Trump for refusing to acknowledge the rising threat of white nationalism — and occasionally sharing its rhetoric.

“It is important at the outset to say that words have consequences. It is a shame, Mr. President, that you would downplay the threat of white supremacist violence,” said Dr. Reza Mansoor, the leader of the Islamic Association of Greater Hartford.

Despite a significant uptick in violence attributed to white nationalists, the president demurred Friday when asked if he saw white nationalism as a rising threat around the world.

“I don’t really. I think it’s a small group of people that have very, very serious problems, I guess,” Trump said. “If you look at what happened in New Zealand, perhaps that’s the case, I don’t know enough about it yet. They’re just learning about the person and the people involved. But it’s certainly a terrible thing.”

Steve Ginsburg, the Connecticut regional director of the Anti-Defamation League, said the ADL’s experts in the study of extremist groups say the New Zealand attack is part of a global pattern. The accused killer in New Zealand is an avowed nationalist, as is the man accused of shooting 11 Jews to death last year at the Tree of Life Synagogue in Pittsburgh.

“This massacre was the direct result of the demonization of Islam and of immigrants,” Ginsburg told a standing-room audience of more than 300 in the musallah, or prayer hall, of the Berlin Mosque. “This is a global threat we’re seeing with white supremacists right now.”

Authorities say the attacks on the Pittsburgh synagogue, New Zealand mosques, and another attack on a mosque last year in Quebec City, killing six, were aimed at people, in some cases immigrants, deemed outsiders or even invaders.

Rabbi Herbert Brockman of Hamden said the number of crimes by white extremists doubled since 2017.

“It is an epidemic, and there is no vaccine, save us,” he said.

Trump, who has a long history of inflammatory remarks about Muslims and immigrants, was hailed by the suspected shooter in New Zealand as a symbol of “renewed  white identity and common purpose.” The president also has described his proposed southern border wall as necessary to repel invaders.

The White House called the shooter “deranged” and dead wrong about seeing the president as in league with his anti-immigrant manifesto.

“I think leadership requires people to come from a place of moral authority, and the president’s office has moral authority. And if he doesn’t use it, he’ll lose it.”

Some eschewed politics, focusing their remarks on the need to denounce bigotry and stand with the Muslim community. Others referred to the president, though not always by name.

“I am here on behalf of myself and on behalf of Gov. Ned Lamont to say that our state is a state that welcomes everyone regardless of religion, regardless of ethnic background,” Bysiewicz said. “We welcome you. We love you. We stand with you. And we will do everything in our power as government leaders to make sure that all of us in our state are safe.”

Their host was state Sen. Saud Anwar, D-South Windsor, a physician and the recent winner of a special election that he believes made him the first Muslim member of the Connecticut General Assembly. State Sens. Julie Kushner of Danbury and Matt Lesser of Middletown and Rep. Jillian Gilchrest of West Hartford, all first-termers, joined him.

Anwar introduced Blumenthal as one of the president’s favorite targets on Twitter.

Blumenthal said his father was an immigrant, a Jewish refugee fleeing a hostile Germany in 1935.

“We do not call them invaders,” Blumenthal said of immigrants, a clear rebuke to Trump. “And we do not belittle the problem of white supremacists rising around the world, because belittling it emboldens it.”

Imam Refai Arefin of the Berlin Mosque contrasted the president’s language with the message delivered after the attack by New Zealand’s 38-year-old prime minister, Jacinda Ardern, about the immigrant victims. She said, “They are us.”

“She was communicating to us that they are her people,” he said.

Anwar was asked after the vigil, as Muslims were called to the third of the day’s five prayers, if he was disappointed that Trump hedged on the question of white nationalism.

“These are  missed opportunities,” Anwar said. “I think leadership requires people to come from a place of moral authority, and the president’s office has moral authority. And if he doesn’t use it, he’ll lose it.”