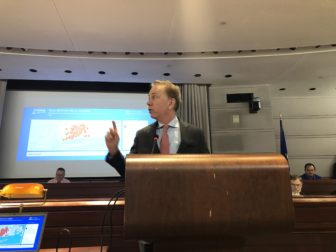 The hot-button proposals involve nudging Connecticut’s minimum wage to $15 an hour, up from $10.10, over the course of several years, and imposing a 0.5 percent payroll tax to fund a pool of money for paid leave. Corporate officials have denounced the measures as unfriendly to businesses, particularly small companies that could struggle with workers’ absences and additional costs.

“I think paid family leave is going to pass. I think its time has come,” Lamont said after addressing a crowd during the Connecticut Business and Industry Association’s annual lobbying day at the Capitol. “They see our neighboring states are doing it. They see a lot of major businesses are already taking the lead on that as well as moving to a $15 minimum wage, and Connecticut is going to catch up there.”

Proposals that cleared the Labor and Public Employees Committee last week would raise the minimum wage to $12 by January 2020, to $13.50 the next year, and $15 by 2022. Lamont has put forward a similar plan that would phase in the wage increase over four years, instead of three.

Several bills tied to paid family and medical leave also have surfaced. Two of them suggest benefits equal to 100 percent of workers’ pay, up to $1,000 a week. Lamont’s proposal would reimburse employees at a rate equal to 90 percent of their base salary. The payroll tax would be levied no later than October 2020, and worker compensation would be available beginning in January 2022.

“These are things that big business already does, so we’re trying to find ways that small businesses can allow their employees a little bit of flexibility as well in the case of an illness or pregnancy,” Lamont said. “If CBIA and Republicans want to come to the table, let’s talk. If not, I’m going to pass a bill that I think makes sense.”

The governor defended the legislation, along with his push for electronic tolls and the need for more investment in transportation, earlier Wednesday in a speech to CBIA members.

He promised that funding for paid leave would be “rock solid,” and said he would impress upon lawmakers that “we cannot get this wrong.”

“I understand that when a person is gone for a period of time, you’ve got to train them and there’s a cost to that,” Lamont said. “I’ve been there, but I think this really is important and sends a message that Connecticut is a place that understands the single parent, the two working parents, the changing of landscape.”

In a pitch to get business leaders to “stand up” and help sell the state, Lamont talked about his efforts to persuade a ratings agency that Connecticut was headed in the right direction. The agency, Standard & Poor’s, followed up by changing the state’s general obligation bond outlook from “stable” to “positive” for the first time in 18 years.

Lamont billed himself as the first Connecticut governor “in eons” to come from the corporate world and said he would reward business leaders’ confidence by ensuring state funds are spent appropriately, by holding the line on spending, and by pressing for new sources of revenue, such as tolls.

He also pledged to streamline administrative services, making it simpler for companies to do business with the state.