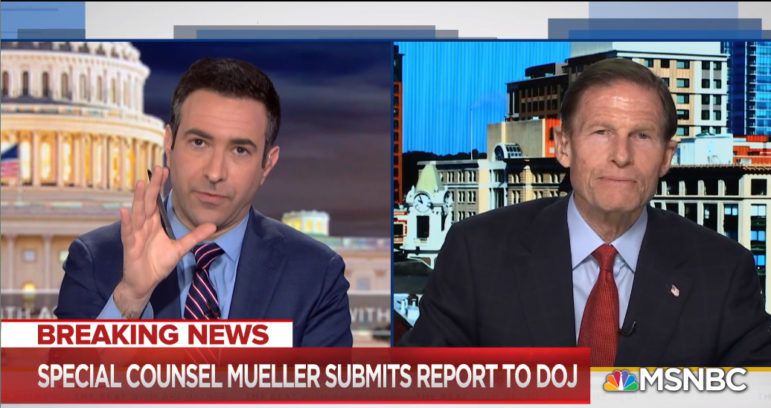 Washington – The Trump campaign on Monday attacked the credibility of Connecticut Sen. Richard Blumenthal and several other Democrats, warning television networks  against booking them on their news shows.

“You should begin by asking the basic question: Does this guest warrant further appearances in our programming, given the outrageous and unsupported claims made in the past? “ Tim Murtaugh, spokesman for the Trump campaign, wrote in a memo to the television networks.

Besides Blumenthal, whose name was at the top of the  list, Murtaugh warned against booking Rep. Adam Schiff, D-Calif., head of the House Intelligence Committee, and Rep Jerry Nadler, D-N.Y., head of the House Judiciary Committee. Both panels are investigating the Trump campaign and the Trump administration.

Appearing on CNN late Monday, Blumenthal said “the effort to discredit critics is not new to this administration.”

Murtaugh said a summary of special counsel Robert Mueller’s final report on a 22-month probe of Russian involvement in U.S. elections “found that no one associated with President Donald J. Trump’s 2016 campaign colluded with Russia, despite repeated offers from Russia-linked operatives.” He also said that although Mueller made no recommendation on the issue of obstruction, Attorney General William Barr and Deputy Attorney General Rod Rosenstein “determined that there was no obstruction.”

“The only way to interpret these conclusions is as a total and complete vindication of President Trump,” Murtaugh wrote.

Among the “reckless” and “outlandish, false claims” he listed in his memo, was Blumenthal’s statement in October on  MSNBC that “the evidence is pretty clear that there was collision between the Trump campaign and the Russians.”

Blumenthal said Murtaugh’s memo did not include the whole statement he gave MSNBC in October, which was ““the evidence is there, whether there’s enough of it to bring criminal charges is another issue entirely.”

No one has seen the evidence that led to Mueller’s determination because the special counsel’s report has not been released in full to Congress or the public.