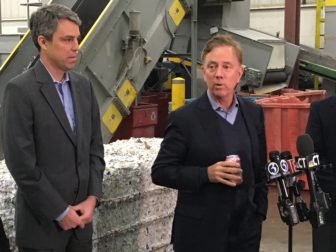 East Windsor — Gov. Ned Lamont unveiled a series of proposals Tuesday to reduce bureaucracy and make it easier for businesses to work with the state.

Lamont, who made the announcement at Infoshred, a local document shredding firm that holds the contract to dispose of sensitive state documents, said his initiative would eliminate thousands of unnecessary forms the state must process annually.

“With fresh eyes, an aggressive approach, and collaboration, we can modernize state government the way it should be,” said Lamont, who made the announcement standing before two huge rectangular blocks of shredded paper. “It is too difficult to navigate through our agencies – it slows down our employees and our businesses.

“State government needs to embrace change and be willing to take responsible risks to move into the future,” he added. “The status quo is not good enough.”

Department of Administrative Services Commissioner Josh Geballe, who joined Lamont at the announcement, said the administration also was launching an electronic outreach program to solicit new ideas to reduce bureaucracy.

Anyone with a suggestion may post their idea — using the hashtag cutredtapeCT — on Twitter, Facebook or other social media. The state also has created a new email address — cutredtapect@ct.gov — that also will be monitored.

The department will review ideas through the end of April, but those who submit the best ideas over the next week will be invited to discuss their ideas directly with Lamont and key commissioners.

“As a former CEO of a technology company in Connecticut, I know this is a fantastic state to build a business but that the state can be a better partner in helping Connecticut businesses grow,” said Geballe, a former IBM executive. “Citizens and businesses in this state are our customers, and we can help them by simplifying processes and eliminating wasteful duplication of data collection.”

Lamont said every state that wishes to sell a product or service to state government must fill out at least seven procurement forms. The administration has crafted a bill under consideration by the legislature that would reduce this to one form.

The goal, the governor said, is to eliminate more than 90,000 forms that must be filed with the state each year.

At the same time, the Department of Administrative Services is making various procedural changes including: