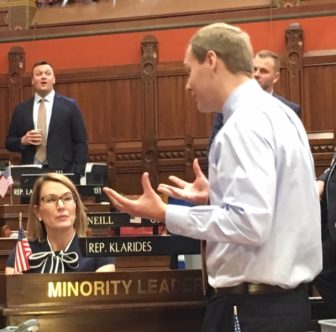 Following a now-familiar script, the General Assembly split along partisan lines Wednesday to approve another of the dozen or so collective bargaining agreements or arbitration awards that could come before lawmakers in 2019.

Once rare, legislative votes on labor deals are the new normal. One of the Republican victories in a budget agreement struck two years ago is a requirement that all labor deals come to votes in the House and Senate. In the past, they took effect in the absence of a vote to reject.

By votes of 84-62 in the House and 19-17 in the Senate, legislators approved a contract that accepts six tax attorneys in the Department of Revenue Services as union members and grants them general wage increases of 3.5 percent in each of the next two years.

Every Republican voted to reject the contract. They were  joined by four Democrats in the House and three in the Senate.

The expenses in the contract were relatively modest: The Office of Fiscal Analysis estimates annualized costs of $88,012, including $22,518 in each of the next  two years for the 3.5 percent raises. Other benefits include fringe, longevity payments and annual increments of 2 percent.

But Republicans say even modest raises of 3.5 percent are excessive when compared to the private sector, and they collectively limit the state’s ability to meet other needs, such as funding for child care and programs for intellectually disabled adults.

“Nobody is getting that in the free market,” said Senate Minority Leader Len Fasano, R-North Haven.

House Majority Leader Matt Ritter, D-Hartford, said the solution was to bring up services and benefits for those in need, not to bring down state employees. He invited Republicans to support Democratic bills to raise the minimum wage and create a program of paid family medical leave.

Sens. Alex Bergstein of Greenwich and Will Haskell of Westport, two freshman Democrats who flipped GOP seats last year, and Sen. Joan Hartley of Waterbury, a long-time fiscal conservative, joined all 14 Senate Republicans in opposition. The trio voted with the GOP last month on an arbitration award.

In the House, Democrats Patrick Boyd of Pomfret, John Hampton of Simsbury, Jonathan Steinberg of Westport and Philip Young of Stratford voted to reject.

The contract approved Wednesday was the fifth labor deal to come before lawmakers this year.  Eight others are under negotiation. All are small bargaining units with as few as one and as many as 33 members. The State Police Union and state are in arbitration.

Republicans said the contract approval process was on auto-pilot for decades, requiring legislators to know little or nothing about the deals.

No contract or arbitration award has been rejected this year, but the new rules raise awareness about the costs of labor contracts and roll call votes create potential campaign issues, Klarides said.

“That’s something they’re going to have to defend at some point,” she said.