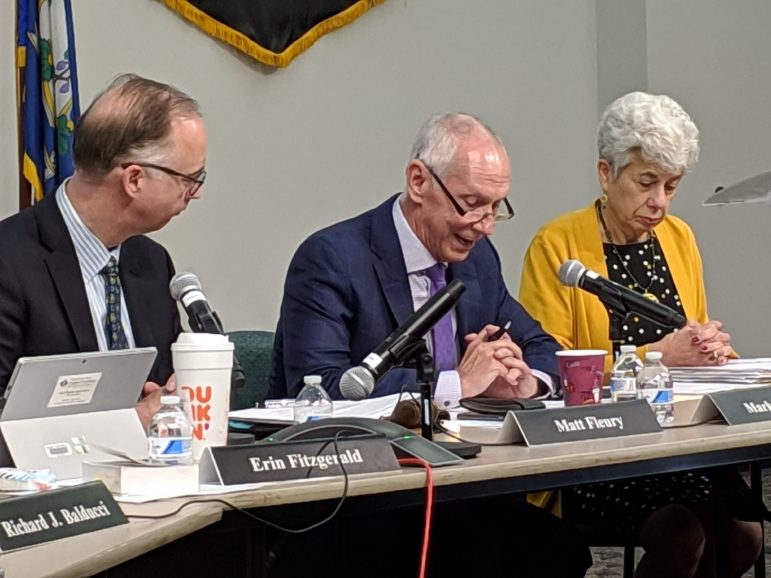 Connecticut State University President Mark Ojakian talks about the three regional presidents hired Thursday at a Board of Regents for Higher Education meeting. To his left is Regent Merle Harris and to his right is Matt Fleury, the chairman of the Board of Regents.

The Board of Regents for Higher Education forged ahead Thursday with controversial plans to merge the state’s 12 community colleges by hiring three regional presidents — newly created positions, each with yearly salaries of $220,000.

At the same meeting, the board approved a 2.1 percent increase in tuition and fees for community college students  that amounts to a $92 annual increase for full time students and is expected to bring in $2.7 million in additional revenue.

That added revenue comes nowhere near closing the projected budget gap for next year that was also announced Thursday: the shortfall for community colleges has grown in recent months from $22.7 million to $33 million.

Matt Fleury, the chairman of the board,  said of the financial trouble: “We can’t do this with tuition. We have structural challenges here and we also just have got to advocate incredibly vigorously for the kind of public funding that these institutions need and deserve.”

That is where the plan to merge the 12 colleges — proposed by Mark Ojakian, president of the Connecticut State Colleges and Universities and supported by the governing board of regents — is key, according to Ojakian and the regents.

Ojakian has said the plan, which includes consolidating administrative functions and aligning curriculum across the campuses, will not only save money  — $23  million — but will strengthen the number of students graduating successfully and going on to further education or careers.

That merger is years away, however. Accreditors did not approve the first plan for a merger submitted by CSCU last year and have yet to approve a new one. The full merger is not expected to take place until 2023.

Ojakian said Thursday that the hiring of the three regional presidents “is a critical first step in implementing” the merger plan called “Students First.”

He has said that he feels the accreditors — the New England  Commission of Higher Education — will be more likely to approve the merger when it comes before them if the administrative structure is already in place.

“The hiring of three regional presidents is a critical first step in implementing Students First,” Ojakian said, noting that the presidents will act as “change agents” to bring the college campuses together “to prepare for the new college structure and its mission.”

Each new president will oversee one of three regions in the state with several colleges in each and will be responsible for — among many elements  — looking for ways to save costs by sharing services; aligning curriculum; bringing the campuses together around strategic goals; identifying students’ needs and improving student outcomes; and working with businesses and community leaders.

The presidents hired Thursday and scheduled to start this summer are:

— Rob Steinmetz, who will become president of Region One which includes Capital, Manchester, Middlesex, Three Rivers and Quinebaug community colleges, is now serving as vice president for students affairs at Portland Community College in Oregon. He has more than ten years of educational and administrative experience, according to the regents, and holds a Bachelor of Science and a Master of Public Administration degree from the University of Tennessee, Chattanooga, and a Doctorate of Education from the University of Alabama.

He began his collegiate career at Chattanooga State Community College where he earned an Associate Science degree.

He has had more than a decade of experience in the CSCU system and holds a Master of Management degree from Cambridge College and a Doctor of Education degree from Nova Southeastern University. He began his career at Holyoke Community College in Massachusetts. 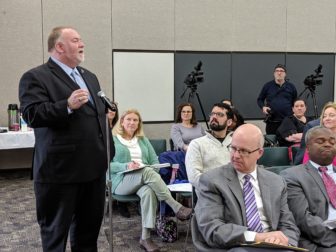 James Lombella, one of three new regional presidents hired Thursday, speaks to the board.

— Thomas Coley was selected to be the president of Region Three which consists of Gateway, Housatonic and Norwalk community colleges. He now serves as chancellor of the South Bend-Elkhart campus of Ivy Tech Community College in Indiana. He has had more than 30 years of educational and administrative experience and holds a Bachelor of Arts degree from Moorehead State University and a Masters of Arts and Ph.D from the University of Wisconsin. Coley announced in January that he is retiring from Ivy Tech as of May 31.

Ojakian said that the new presidents were selected from a field of 61 applicants by three regional advisory committees that included 50 participants. The 61 candidates came from an array of different backgrounds, Ojakian said, including 11 women, 15 African Americans and four Hispanics. The six finalists included one woman and one African-American man.

Of the three candidates selected, all are men and one, Coley, is African-American. The other two are white.

All three were elected unanimously and each addressed the board — Steinmetz and Coley over speaker phone and Lombella in person — and thanked them.

Steinmetz said that the board’s vision “to create a long term solution to what the majority of community colleges are really experiencing across the country is quite frankly what drew me to the opportunity, to explore applying for this role and so I appreciated learning more about that vision as I’ve gone through the process.”

He said it’s clear to him that there is “a great deal of passion and pride for each community and for how they support their students.”

Opposition to the merger

Some faculty and legislators have spoken out strongly against the planned merger — fearing that the plan won’t really save money, that it will undermine the strength and  identities of the colleges, and hurt student achievement.

They have particularly questioned the wisdom of hiring regional presidents before the proposed single college is approved by accreditors. In addition, legislators are considering a bill that would enable lawmakers to stop plans to merge the 12 community colleges. Senate Bill 749 is now awaiting action.

State Sen. Mae Flexer said of the hiring decision Thursday: “I think this is another example of the Board of Regents moving forward with a proposal despite the fact that the legislature has expressed its concern about trying to get  more scrutiny over the Student First proposal and Gov. Lamont has not weighed in.

“President Ojakian just thinks he can go full steam ahead with his proposal despite concerns expressed not only by the legislature but by students and faculty through-out the state,” she continued. “I think they are perplexed and I am so perplexed as to why the components of this proposal are being put in place years before the accreditation would even be considered by NECHE. It’s a bad thing to do. We are going to have duplicative structures.”

Elle Van Dermark, a faculty member at Asnuntuck Community College, said she is disappointed the regents have “hired another layer of management and continue to implement a plan that has been so clearly refuted by a cadre of experienced higher education leaders in Connecticut and across the nation.

“More troublesome is the tens of millions of dollars  being wasted on an ever-growing CSCU administration…. and they have increased student tuition!  It is a sad testament to what is valued and important by the CSCU and BOR. “

Stephen Adair, a sociology professor at Central Connecticut State University, which is part of the CSCU system, said the “community college campuses are starved for resources” but the system administration “just continues to add more and more senior people on to an already bloated central administration.”

“It is hard to see what these Regional Presidents will be presiding over,” Adair said.

Ojakian said the regional presidents will not be duplicating the efforts of the presidents or chief executives on the campuses.

“I don’t think there will be overlap at all,” he said.  “I think a local campus president or leader is going to focus on their individual institution and continue to enhance the community connection of that local institution. The regional presidents will work with all of them to try to leverage expertise and scale best practices across the region.”

And if the accreditors don’t approve the single college, what  happens to the regional presidents?

“I think they stay in place,” Ojakian said.