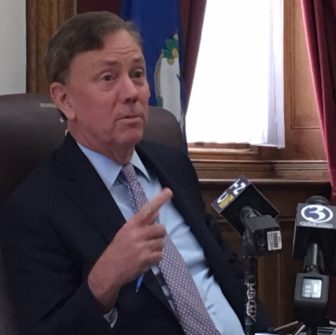 After watching Connecticut income tax receipts fluctuate by hundreds of millions of dollars over the past two years, state officials appear to be getting off the fiscal rollercoaster this spring.

What it means, if early trends continue for another week, is no last-minute curve ball — good or bad — for Gov. Ned Lamont and lawmakers as they strive to craft the next state budget.

Preliminary data released Monday by the Office of Fiscal Analysis and the Department of Revenue Services shows April income tax receipts tied to capital gains and dividends — a key fiscal metric for Connecticut — are running just $84 million below projections for the month.

At the same time, Lamont’s budget office announced income tax receipts from paycheck withholding are running about $100 million ahead of forecast.

Though a net gain of $16 million might seem large, it’s relatively small in the context of a $20.9 billion budget. It represents less than 1/12th of 1 percent of the budget’s $19 billion General Fund.

And it also is far cry from the wildly fluctuating numbers of recent history.

It was the complete opposite in 2017, when income tax revenue projections plunged $450 million.

“Now that we have a good idea, post-April 15th, of what our revenues look like, I think we know that they’re steady,” Gov. Ned Lamont told reporters after a meeting Monday with his department heads. “We haven’t seen a great fall-off like what you saw in New York.”

Connecticut’s neighbor to the west closed its fiscal year on March 31 with state income tax receipts down $3.7 billion, or almost 5 percent, according to New York State Comptroller Thomas DiNapoli’s office.

Despite the relative stability of Connecticut’s revenues, Lamont said it remains crucial to develop a sustainable, new state budget that does not increase income tax rates.

“Do I take anything for granted in terms of the future?” he added. “Absolutely not. … You’ve still got to prepare for that rainy day.”

But it’s the last forecast — and particularly any trend in quarterly income tax payments — that is most crucial.

One reason for this involves the calendar.

The April report comes two weeks after the April 15 income tax filing deadline. More important, it is the closest to the date  legislators must adopt a new state budget. This year a new budget is due before the 2019 session closes on June 5.

And if income tax receipts are rising or falling sharply in April, analysts usually project that some or all of that trend will continue in the next budget cycle.

A second reason why the April 30 forecast is crucial involves the instability of Connecticut’s income tax.

While two-thirds of the $9.7 billion the income tax raises comes from paycheck withholding, it’s the remaining third, which is paid quarterly, that draws the most attention each spring.

This stream, which includes major income derived from capital gains, dividends and interest, traditionally has been the most volatile source of tax revenue, raking in huge dollars during good economic times and plunging during downturns.

So when April income tax receipts tied to Wall Street were poor, legislators had fewer resources to balance the next budget.

And when they were robust, this typically meant new programs, spending increases, tax cuts or all of the above. But since 2017, the legislature has adopted a new “volatility cap” designed to force the state to save future April income tax bonanzas.

Sen. John Fonfara, D-Hartford, co-chairman of the legislature’s Finance, Revenue and Bonding Committee and one of the leading proponents of the volatility cap, said a stable revenue forecast, coupled with Connecticut’s new commitment to savings, “is a positive, no question.”

Former Gov. Dannel P. Malloy told legislators before his term ended in early January that the revenue situation appeared to be stabilizing.

The revenue plunge of 2017 has been followed by job and wage growth, signs that Connecticut’s economic recovery has been picking up steam.

Malloy also said last spring that while economic growth was real, the $2 billion bonanza was partially due to some one-time factors.