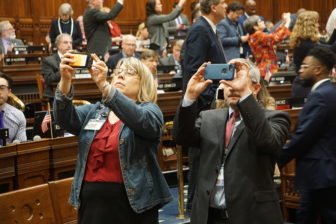 Shannon Wegele and Jesse Hubbard of the secretary of the state’s staff photograph the vote tally.

A supermajority in the House of Representatives voted Wednesday night for a resolution authorizing a referendum on amending the Connecticut Constitution to permit early voting, a convenience now permitted in most other states.

If the Senate concurs by a similar margin, voters will be asked in 2020 if they want to remove a constitutional prohibition on early voting. A Senate vote of less than 75 percent in favor would delay a referendum by at least two years.

“Tonight’s vote is a strong, bipartisan statement in favor of making voting easier for voters,” said Secretary of the State Denise Merrill. “Ultimately, this is not a question of partisanship, it’s one of improving the voter experience. Connecticut has fallen behind other states in removing the barriers that can make it harder for our voters to cast their ballots.”

The lopsided and bipartisan House vote of 125-24 easily exceeded the 75-percent supermajority threshold of 114 votes, but it came after a day of behind-the-scenes negotiations about final language — and an unexpected effort by Republicans to amend the resolution to force a new election in Stratford to resolve a contested House race.

A Committee on Contested Elections deadlocked along partisan lines in February over whether to recommend the House of Representatives order a new election in the 120th House District of Stratford, where an estimated 75 voters were given the wrong ballots in a race Rep. Philip Young, a Democrat, won by just 13 votes.

On a party-line vote of 90-59, Democrats upheld a ruling of the chair that a new election in Stratford was not germane to the question of a constitutional amendment. But the partisan defeat did not upend bipartisan support for early voting. Thirty-five of the 59 Republicans in attendance voted to place the early-voting question on the ballot. All 90 Democrats supported the measure.

In 2014, voters in Connecticut rejected what Merrill called a poorly worded amendment — it talked about removing restrictions on absentee ballots and not early voting — by a vote of 491,447 to 453,070. The new question asks, “Shall the Constitution of the State be amended to permit the General Assembly to provide for early voting?”

The overwhelming passage came after an agreement was struck to change the proposed amendment, drawing solid GOP support. Originally, it would have mandated at least three days of early-voting.  The final version removes the constitutional prohibition on early voting, but leaves the ultimate authority for allowing early voting up to the General Assembly.

The amendment also would remove from the constitution the limited circumstances under which absentee ballots can be used.

Amending the constitution is cumbersome.There are two paths to place the question on the ballot, each requiring the General Assembly to adopt a resolution. If the House and Senate approve the resolution by a supermajority of 75 percent, then the question would go on the next statewide ballot in 2020. If not, an identical resolution must win simple majorities in successive legislative terms, delaying a referendum until 2022.

Senate approval by 27 of the 36 senators would place the question on the ballot in 2020.

Gov. Ned Lamont praised Merrill for pursuing passage over several years and the House for striking a bipartisan compromise.

“In a 21st century economy, it is simply not realistic nor practical to expect every citizen to be able to physically go to one designated location during a specific set of hours on a Tuesday,” Lamont said. “As a democracy that prides itself on openness, transparency, and accessibility, it is our responsibility to make it easier for citizens to cast their ballots and have a say in their government. Early voting procedures have been successful in a growing number of states across the country – Connecticut has fallen behind and it’s time we catch up.”