Kruger exits UConn Board of Trustees, Lamont in no rush to replace him 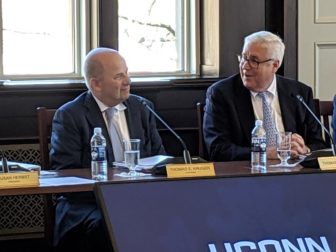 Tom Ritter, vice chairman of the UConn trustees, praises Tom Kruger, outgoing president of the board. It was Kruger’s last meeting.

Storrs — Thomas Kruger bid farewell to the UConn Board of Trustees Wednesday to a standing ovation and praise from fellow board members.

Kruger, who has served on the board for eight years, was appointed chairman in December, 2017 by then Gov. Dannel Malloy.

He resigned after the new administration made it clear earlier this month that Gov. Ned Lamont was changing the leadership of the board. Wednesday was Kruger’s final meeting.

Tom Ritter, vice chairman of the board and considered to be a likely candidate for the chairmanship post, said Kruger has always had “the utmost integrity.”

“You had the pressure of being appointed by one governor, having an election and doing a search for a president during that time period,” Ritter said, adding that Kruger went about the search in his “ethical, logical way and we ended up fine.”

Ritter was widely seen to be critical of the search for a new president, but the governor’s staff said he is now a supporter of the new president.

In the resignation letter he sent earlier this month to Lamont, Kruger urged the governor to choose Shari Cantor, another trustee, as the next chairman of the board. Lamont has declined to discuss who he will appoint, but his senior aides have said he is intending to make significant changes to the board.

On Wednesday, Paul Mounds, the governor’s chief operating officer and liaison to UConn, said that under the by-laws, Ritter will serve as interim-chairman, but that the governor is not going to rush his selection of a new chairman.

“We’re talking to people to get feedback … This is an important decision, similar to the process the governor took for choosing commissioners of our agencies,” Mounds said. “So we are going to do our due diligence. We’ll talk to many people on the board, on the faculty and in the administration and then talk to people outside the school who have relationships with UConn.”

He said Lamont will be looking for someone who “bleeds blue and someone in line with the governor’s vision of how UConn can play a role in terms of the economy, in terms of the academic development of our students and workforce, but also an individual who understands what it means to be a UConn Husky.”