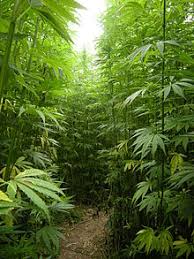 Lawmakers said they wanted to move quickly on a new hemp program so farmers could plant seeds by the start of growing season in June.

Lawmakers in the Senate cleared the way Thursday for a blooming hemp industry in Connecticut, authorizing a pilot program for the production and sale of the crop.

Proponents said they wanted to move quickly so farmers could begin planting seeds in June – the start of the growing season. They held up the proposal as a catalyst that could revive ailing sectors of the state’s farming industry.

Sen. John A. Kissel, R-Enfield, said warehouses and solar panels have replaced farm land across dozens of acres in his district as the demand for shade-grown tobacco has waned.

“While I’m certainly not against solar panels, they do not necessarily reflect the pastoral, bucolic nature of the area I grew up in,” he said. “To flip it over to hemp will give us a leg up and protect the nature of our communities. They will be beautiful with this crop.”

The bill allows commercial hemp farming in Connecticut, and calls on the state agriculture department to submit regulations to the federal government for licensing, growing and processing hemp. The department would also be required to come up with guidelines for tracking and inspecting farm land.

Hemp is considered a booming industry because the plant, a type of cannabis, produces a non-intoxicating substance known as CBD oil, which is used to treat inflammation, pain and anxiety. Entrepreneurs have incorporated it into lotions, pills, tinctures and candies.

Legislators said the crop is used in an array of other products, from clothing to motor vehicle parts.

The Connecticut Farm Bureau Association has estimated that an acre of hemp could generate 500 to 1,500 pounds of dried flowers and reap profits of $37,500 to $150,000. At least 200 of the state’s more than 6,000 farmers have expressed an interest in growing hemp, officials said.

“This will help stabilize our dairy farmers who have the predominance of the land,” said Sen. Cathy Osten, D- Sprague. “It’s extremely important to do this, so we can get our foot into this business and make sure Connecticut has a thriving industry that helps out its agricultural communities.”

So far, 43 states have authorized hemp production, including North Carolina, California, New York and Pennsylvania. The Ohio Senate passed a bill to legalize hemp in March.