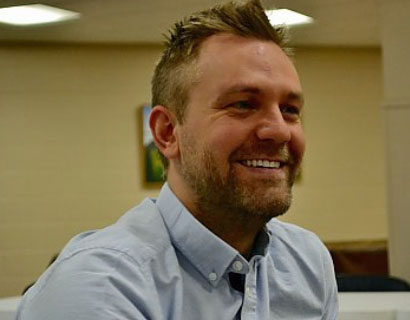 Connecticut’s prison inmates currently pay the second highest rates in the country to make phone calls in the country. If Hamden State Rep. Josh Elliott gets his way, they could soon pay nothing to call their loved ones — but only if his bill doesn’t lose momentum and get buried in a busy session of the General Assembly.

Elliott called the bill, “An Act Concerning the Cost of Telecommunications Services in Correctional Facilities,” HB 6714, one of his top priorities this legislative session.

At a community event hosted by Common Cause in Hamden at the Miller Senior Center Tuesday evening, Elliott said that he fears the bill won’t make it through this year. Elliott cosponsored the bill with State Reps. Mike D’Agostino, Peter Tercyak, Kim Rose, Will Haskell, Anne Meiman Hughes, and David Michel.

According to information compiled by Bianca Tylek of Worth Rises, which advocates for prison reform and partnered with Elliott to introduce the bill, Connecticut inmates pay between 21 cents and 32.5 cents per minute to make phone calls. That means a 15-minute phone call can cost almost $5.

Those rates place Connecticut second only to Arkansas. In Rhode Island, one minute costs only 2.9 cents. In New York it costs 4.3 cents.

The Connecticut Department of Correction (DOC) contracts with Securus Technologies to provide phone services to inmates. According to a letter Tylek sent to New Haven State Rep. Juan Candelaria, in the 2017-2018 fiscal year, Connecticut inmates and their families paid around $13.3 million for phone calls. The state takes 68 percent of the revenue, around $7.7 million in FY 17-18.  Securus gets the rest — $5.6 million in FY 17-18.

By comparison, in New York and Rhode Island, which also contract with Securus, inmates and their families paid only $2.4 and $1.7 million respectively in FY 17-18.

(Read more about Elliott’s bill in the CT Mirrorand The Intercept).

HB 6714 would require that the DOC provide free telephone service to inmates. It also stipulates that phone or other types of telecommunication services cannot replace in-person visitation time. The bill would essentially force the DOC to negotiate its contract with Securus, said Tylek. The Joint Committee on Judiciary advanced it on April 9, and it was referred to the Office of Legislative Research and Office of Fiscal Analysis on April 18.

If the bill passes, the state would have to assume the cost of providing phone service to inmates, and would have to forgo the revenue.

Tylek said it’s unlikely that the state would have to pay the full $13.3 million because it would negotiate a new contract with Securus. Still, some legislators have said the bill would be too costly.

For Elliott, Tylek, and other proponents, the cost is worth it.

Elliott said that, though charging for the calls may generate revenue for the state, it does so at a large cost to Connecticut residents.

“Every shred of data show that having contact with the outside is the best way to not go back” to prison, said Common Cause Connecticut Executive Director Cheri Quickmire. The high rates for calls also place a financial burden on families who want to talk to their incarcerated loved ones. She said she will continue to push for the bill, and had already done so at a meeting with the DOC earlier in the day.

Elliott promises to try again to pass the bill next year if it fails to cross the finish line this session.