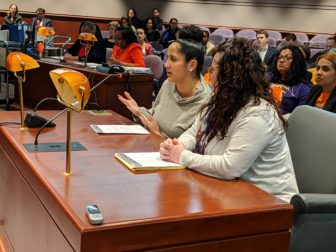 Marlene Torres, left, says that as a child she grew depressed because her family could not afford for her to speak much to her older brother while he was in prison. With her is Brittany Kane, program coordinator for the CT Children with Incarcerated Parents Initiative.

Marlene Torres remembers as a young child waiting for the one or two minutes she’d get to talk to her brother on the phone when he was in prison. The family often couldn’t afford to talk to him more than once a week and, even then, only for a short time because the phone calls were so expensive.

At a hearing Monday before the Judiciary Committee, Torres spoke in favor of a bill that would allow inmates to make or receive phone calls for free, telling lawmakers she grew up “stressed out” and “very depressed” because she missed her brother, who was a father figure to her.

“Obviously, it’s important to keep a family together no matter what the circumstances,” Rep. Toni Walker, D-New Haven, said to Torres. “The best thing we can do is maintain that security so that when your brother comes home, he comes home to a family that is going to open their arms to him …and try to keep him on the straight and narrow.”

Brittany Kane, program coordinator for the CT Children with Incarcerated Parents Initiative, also spoke in favor of the bill, telling lawmakers that a 15-minute call within the state’s prisons costs about $4.

Kane said Connecticut receives a 68 percent commission rate on the revenue from the calls and collected $7.7 million in Fiscal Year 2018.

She noted that it’s not the inmates paying for the phone calls. That cost is born by the family they left behind.

“When a parent is incarcerated, specifically a father, a family’s income drops by an average of 22 percent,” Kane said. “As a result, mothers and caregivers report being unable to pay for their children’s basic necessities, including food, utilities, rent and medical care, often creating reliance on state aid programs and services. It is also these same mothers and caregivers that are paying for the phone call that we are speaking about today.”

Bianca Tylek, executive director of Worth Rises, a New York-based national criminal justice advocacy group, told legislators that since 2012, the state has contracted through Securus Technologies, a national prison telecommunications corporation, which she said  “capitalizes off the need for human connection and, understanding the vulnerability of the people subjected to its services, charges exorbitant rates for loved ones to stay in contact.”

She said that Connecticut now ranks 49th, in front of only Arkansas, in the high cost of phone calls.

A phone call to Securus for comment was not immediately returned Monday afternoon.  Karen Martucci, director of external affairs for the state Department of Correction, emailed a statement saying that the department is  “supportive of efforts that increase communication between offenders and their loved ones, which will hopefully help to reduce the rate of recidivism.”

“Obviously, it’s important to keep a family together no matter what the circumstances.”

The bill says the Commissioner of Corrections shall provide telephone service for free and may provide supplementary telecommunications services including video and electronic mail services. “To the extent that the commissioner provides any such services, each such service shall be provided free of charge to such persons” the bill says, whether the inmate initiates the contact or receives it.

Child Advocate Sarah Eagan said this is particularly important for youths who are incarcerated in the adult system so they can be in touch with their families.

Kane supplied “personal impact statements” from family members of inmates. One of the family members, a mother who wished to remain anonymous, said that to date she has spent $4,320 to talk to her son.

“The phone calls are very expensive and not for a long amount of time,” she said in a statement. “We only get to talk a couple of times a week because of money, but I know he wants to call and talk a lot more than I can afford. That hurts as his mother.”

Rep. Craig Fishbein, R-Wallingford, said the bills seems “to allow for a call of any length every day, which I think people in this building might think is a little much.”

“The phone calls are very expensive and not for a long amount of time. We only get to talk a couple of times a week because of money, but I know he wants to call and talk a lot more than I can afford. That hurts as his mother.”

A mother whose son is incarcerated

He suggested there might be a “happy medium,” allowing inmates free calls on holidays like Christmas or Thanksgiving, but perhaps not at other times of the year.

Another legislator suggested that perhaps the calls could be less expensive, but not free.

Testimony submitted by the Judicial branch said that while it “takes no position on the policy change contemplated in this proposal, the bill as proposed would seriously impact the funding of several adult probation positions.”

The agency said that in Fiscal Year 2018, the Judicial Branch received more than $5.5 million from the revenue generated by telecommunication services to pay for staff and other expenses related to the Probation Transition Program, as well as for a unit that provides enhanced supervision of people who violated probation.

“We do not have the necessary funding in our budget to make up for this loss of revenue,” the judicial branch wrote.