Blumenthal presses Barr to recuse himself from investigations into White House 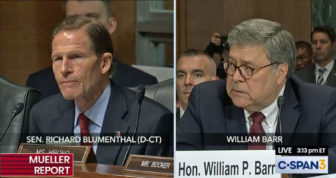 Washington – Sen. Richard Blumenthal on Wednesday asked Attorney General William Barr whether he spoke to the White House about any of the 12 cases referred by special counsel Robert Mueller to federal prosecutors as a result of a probe into Russian interference in U.S. elections.

At a hearing before the Senate Judiciary Committee Wednesday, Barr was elusive, saying he did not discuss anything of substance about the cases with the White House. He declined to say whether he had discussed anything that was not substantive.

“I don’t recall,” Barr said, adding, “if I looked over a list of cases and thought about it,” he might be able to answer Blumenthal.

Blumenthal also asked Barr if he would recuse himself from those investigations.

“No,” was Barr’s terse response.

Barr told Blumenthal he was finished with the Mueller report.

“The job of the Justice Department is now over … we’re out of it,” Barr said. “We’ve got to stop using the political process as a weapon.”

Barr testified the day after The Washington Post revealed that Mueller wrote to the attorney general expressing his concerns about Barr’s four-page memo to Congress about the special counsel’s findings, saying Barr’s summary, issued three weeks before the full release of Mueller report, created “public confusion about critical aspects of the results of our investigation.”

According to the Post, Mueller also asked Barr to release the report’s 448-page introduction and executive summary. Barr declined.

At Wednesday’s Judiciary Committee hearing, Barr minimized his differences with Mueller over how he characterized the special counsel’s report before its release. He said several times that Mueller was not upset about the accuracy of Barr’s summary, but “wanted more out there to provide additional context” because it had resulted in misleading press reports.

During a second round of questioning Wednesday afternoon, Blumenthal told Barr “there was nothing in [Mueller’s] letter about the press.”

“I think it was written by one of his staff people,” Barr said.

During questioning by Blumenthal, Barr also revealed he spoke with Mueller after the special counsel wrote to him and that the call was on speaker phone because Deputy Attorney General Rod Rosenstein and other Judiciary Committee staffers were in the room. Barr said there are notes about that phone conversation.

“May we have those notes?” Blumenthal asked.

“Why can’t we have those notes?” pressed Blumenthal.

“Why should you have them?” Barr retorted.

Democrats on the panel repeatedly called for Mueller to testify. There are reports that Mueller is willing to testify, but the Justice Department has been unwilling to set a date for it to happen.

After the hearing, an angry Sen. Lindsey Graham, R-S.C.,, who heads the Senate Judiciary Committee, said he will not call Mueller to appear before his panel.

Democrats also lambasted Barr for testifying before a House Appropriations panel on April 9 that he had no knowledge of any discontent by Mueller or his team about the four-page summary of the investigation’s findings that he gave to Congress.

During a break in the proceedings, Blumenthal said “I see no innocent explanation for [Barr’s] answer.”

“Whether the remedy of perjury is applicable, clearly he lied to Congress and he lied under penalty of perjury,” Blumenthal said.

Democrats on the panel focused on the 10 instances in the Mueller report that indicated the president and his allies tried to obstruct the investigation into Russia’s role in the 2016 election.

Republicans on the panel defended the attorney general, saying he was being subject to “slanderous” treatment. Sen. Ted Cruz, R-Texas, said Barr was a victim of the “Kavanaugh treatment,” a reference to the contentious hearing Supreme Court Justice Brett Kavanaugh received before the Judiciary Committee.

Barr also told Republican senators he shares their concerns about how the investigation into Russian meddling in U.S. elections was started. The GOP says it was the product of politically motivated FBI agents

But not all Republicans defended the president’s conduct.