Lamont willing to compromise on transportation — if tolls are involved

With less than four weeks left in the legislative session, Gov. Ned Lamont made a bipartisan appeal for compromise on tolls.

The Democratic governor pledged to dedicate more resources to transportation construction between now and 2024 — the first year toll receipts might be available. This generally was recognized as one of the soft parts of Lamont’s plan.

But the governor also insisted any bargain would have to include electronic tolls, saying this was essential to provide long-term fiscal stability to a transportation program otherwise headed for insolvency.

“I am more than willing to entertain a compromise that shores up our Special Transportation Fund, provides for some short-term borrowing until the point at which tolls come online,” Lamont wrote in an open letter to the General Assembly.

The governor wants to put electronic tolls on interstates 84, 91 and 95 and on the Merritt Parkway with a base charge of 4.4 cents per mile — before discounts are offered to Connecticut motorists.

This would raise $800 million per year for the budget by 2024, the administration says, with 30 to 40 percent coming from out-of-state motorists. Discounts would be provided to Connecticut residents and to frequent travelers.

But Lamont also had proposed canceling additional resources pledged to the transportation program over the next few years.

Republicans in the Senate and House say that with additional funding — a mix of bonding and sales tax receipts — Connecticut’s transportation program can get by without tolls.

Their plan, “Prioritize Progress,” actually would dedicate roughly $2.4 billion more to transportation construction than Lamont’s would over the next four years combined.

The governor had met with Senate Minority Leader Len Fasano, R-North Haven, in recent weeks to see if a bipartisan deal on transportation financing could be reached.

Fasano expressed disappointment Thursday that Lamont “remains unwilling to consider alternatives to fund transportation over the long-term that do not involve tolls and new taxes.”

“The proposal outlined in Governor Lamont’s letter today is the same ‘plan’ he has been talking about for months,” Fasano added. “It is a plan that is based on hypothetical sketch numbers, that has never been shared with the federal government, and that takes the full General Assembly out of the decision making when it comes to how tolls will actually impact our residents and local communities. Gov. Lamont’s proposal is a new tax not only on residents here and now, but on all future generations who will be paying tolls for years to come.”

The reaction was no less bleak from House Republicans.

“Currently there are no Republican votes in the House for tolls and we’ve conducted a series of forums in the state that have elicited anti-toll sentiments,” said Pat O’Neill, spokesman for the House Republican Caucus.

But Lamont says the Republican plan is not a long-term solution, since the Special Transportation Fund still would plunge into insolvency under that proposal within a decade.

And once Connecticut catches up on some of the transportation maintenance it’s deferred for years, it actually could use toll receipts to pay cash for capital projects, rather than borrowing and running up huge interest costs, the administration says.

“I won’t entertain a compromise in which the numbers don’t add up, the excessive borrowing crowds out other needed and necessary investments elsewhere and the approach is simply a band-aid to buy more time until the point at which we can revisit this conversation in another two years — all while our roads and rail continue to decline and economy limps along,” Lamont wrote. 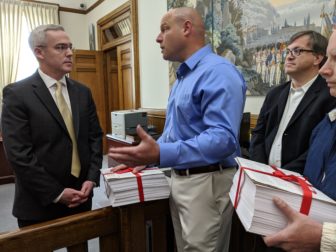 Patrick Sasser, founder and leader of No Tolls CT delivered petitions with more than 100,000 signatures to the governor’s office on Thursday. Chief of Staff Ryan Drajewicz received them and met with Sasser for a conversation.

The governor also hinted tolls would improve Connecticut’s standing with Wall Street, where strong fiscal practices are rewarded with lower interest rates on borrowing. “The ratings agencies are waiting to see our next move,” he wrote.

“The transportation crisis in Connecticut is too large a problem to get bogged down in partisan politics,” Senate President Pro Tem Martin M. Looney, D-New Haven, who supports tolls, said in response. “We must all rise above narrow partisanship and find a bipartisan solution to rebuilding and strengthening our state’s transportation infrastructure. All of Connecticut — Democrats, Republicans, and independents — looks to the entire General Assembly to work together on developing a sustainable answer for our transportation challenges.”

Democratic House leaders did not comment immediately after Lamont released his letter.

As Lamont prepared to release his letter to lawmakers Thursday, toll foes gathered on the steps of the Capitol to – once again – decry the governor’s plans. After a bit of speech making, they delivered petitions to the governor’s office they said contain more than 100,000 signatures of Connecticut residents opposed to Lamont’s tolling plan.

Opponents of tolls will hold a protest outside the Capitol May 18.