Lobbying has been fierce by insurers, business and patient groups 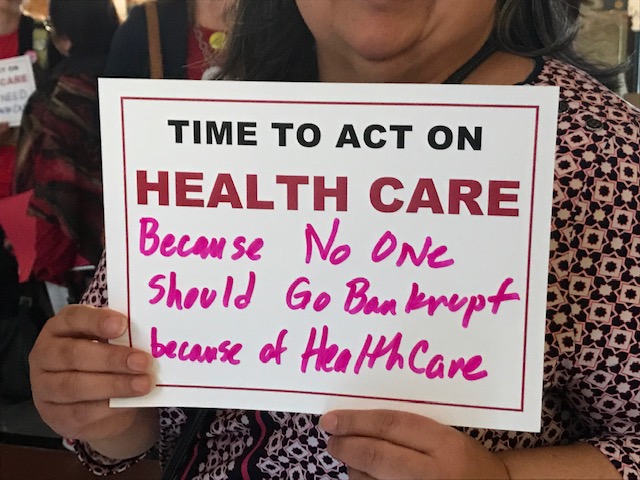 A sign at the Health Care Action Day held May 1 at the state Capitol.

While tolls, bonding and the budget have dominated this legislative session, a battle has been quietly brewing over the creation of a state-administered health insurance public option for small businesses.

That fight is about to burst into the open as the session heads into its final weeks. It pits GOP lawmakers and some of the state’s most powerful lobbies — big insurers based in and around Hartford and the Connecticut Business and Industry Association (CBIA) —against state Comptroller Kevin Lembo, Democrats who control the General Assembly, and patient advocates.

Backers say their legislation would provide small businesses with a desperately needed alternative to increasingly unaffordable commercial plans, while injecting greater competition to force down prices.

Opponents counter that a public option would harm the state’s insurance industry, potentially leading to job losses. They also contend it would disturb insurance markets by raising costs for everyone else, prove unaffordable for businesses it aims to help and add to the state’s indebtedness.

“It will be disruptive to the marketplace and not do anything,” CBIA CEO Joe Brennan said. “This product, as far as we can tell, does nothing to address the cost of care.”

Lobbying against the proposed public option has been fierce, people on both sides say.

CBIA’s lobbyists are buttonholing lawmakers to oppose the measure and its website is posting arguments against it. As of April 10, CBIA had already spent $270,000 on lobbying this legislative session, although it is unclear how much was expended against the public option.

The Connecticut Association of Health Plans, which represents the state’s powerful insurance industry and had spent $33,366 on lobbying as of April 10, has been equally aggressive. Late last month, its lobbying firm, Robinson + Cole, created a group called Insurance Matters to Connecticut to fight the legislation. Its website contends a public option would push up premiums, reduce choice and access, “undermine our largest employment sector, and put our economy in jeopardy” by increasing the state debt.

“It’s a full court press to prevent this from happening,” said state Rep. Sean Scanlon, co-chairman of the legislature’s Insurance and Real Estate Committee and a strong supporter of the public option. “That’s something you can see on a daily basis at the state Capitol.” 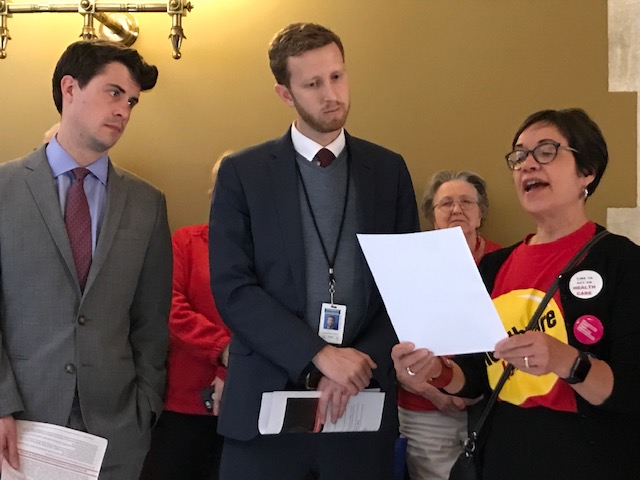 The proposal, which cleared its last procedural hurdle to the floor last week, would create a public health insurance option for businesses and non-profits with 50 or fewer employees in 2020. The state comptroller’s office, which runs the state’s health plans, would administer the plan.

Lembo and his fellow Democrats pointed to the out-of-control cost of insurance for small businesses as justification for a public option, which he says his office could offer for less than commercial competitors. He noted that a quarter of small business employees have lost their insurance in the last eight to 10 years. Regarding concerns about jobs, Lembo said that he would contract with insurers to run the plan, giving them the chance to make money off it. He also suggested it would encourage job creation by making it easier to start a business.

The small employers either can’t afford a plan any longer, or they get so frustrated by the changes from year to year that they walk away,” Lembo said in March 7 testimony before the Insurance and Real Estate Committee. “The existing market forces are not working for employers or people they are trying to provide coverage for.”

Alan Zinser, owner of Murphy Business Sales Connecticut, which brokers the sale of small businesses in the state, said health care costs have become a major drag for his clients. Rising insurance costs hinder small businesses’ ability to compete as well has hire and retain employees, he said.

“I feel this kind of public option is a slam dunk, business-friendly proposal,” Zinser said.

But Brennan, who said that about 90 percent of CBIA’s members are small businesses, insisted the proposal would be bad for them because it could cause cost shifts and fail to pay for itself, adding to the state deficit. A similar program created for municipalities is running in the red, he and other opponents noted.

“The notion that if you take the profit margin out the state can could do it better is a fallacy,” Brennan said. “I think it’s a dangerous notion. Why stop at health insurance? Why not do other things?”

In spite of ferocious opposition, Lembo and Scanlon expressed confidence the proposal has the votes to pass both chambers.

It’s not clear whether Democratic Gov. Ned Lamont will support the proposed legislation. In March, Lamont said he supports “some sort of public option” for businesses but has yet to endorse the proposal before the legislature.

Lembo said last week he is in touch with Lamont and the governor has concerns about the bill. He declined to elaborate.

“We’ll do our best to address those concerns, but at the end of the day, we understand we may be in different places on this,” Lembo said.

This story was reported under a partnership with the Connecticut Health I-Team, a nonprofit news organization dedicated to health reporting.