Dozens of vaccine skeptics testify against removal of religious exemption 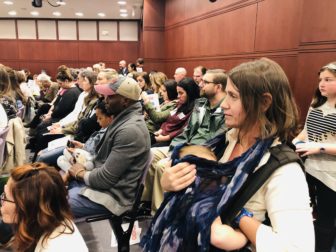 Members of the public wait for their turn to speak on an effort to eliminate the state’s religious exemption on vaccines.

Lawmakers seeking to repeal the state’s religious exemption on vaccines heard from dozens of immunization skeptics Monday who criticized the last-minute attempt to push through legislation that would dismantle the provision.

With only about three weeks left in the legislative session, Democrats in the House and Senate said they are seriously weighing a plan to wipe out Connecticut’s religious exemption. Their effort was hastened by data released this month that showed 102 schools where less than 95 percent of kindergarten students were vaccinated for measles, mumps and rubella – the threshold recommended by the Centers for Disease Control and Prevention.

The data, made available by the state’s Department of Public Health, was the first school-by-school assessment of child immunization rates to be released.

Legislators who originally had hoped to introduce a proposal within a year to eliminate the religious exemption are now pushing to speed up the process and quickly scheduled a public hearing.

That has spurred criticism from a vocal contingent of opponents who elected not to vaccinate their children on religious grounds and who showed up in the hundreds Monday to make their views known.

“This doesn’t feel right. It’s not fair,” Melissa Sullivan, executive vice president of Health Choice Connecticut, a grassroots group, testified at the state Capitol. “I would have much rather seen due process with a bill number and a bill process, something that we as the public can follow.”

So far, no legislation has been drafted to eliminate the exemption. Lawmakers said they would wait until after the hearing to act.

Sullivan suggested that some families be “grandfathered” in, so they have time to relocate.

“I think you need to do that to protect our children and so these families can move out of this state,” she said. “They are not going to injure their child. I am not going to injure my child again with a vaccine. I will not do it. It will be over my dead body.”

Resident Lois Hines questioned why, in the absence of a state emergency, legislators were acting so swiftly. Connecticut’s health department has reported three measles cases so far this year, but nationally, hundreds of cases have been recorded across more than 20 states. Health officials have called the outbreak the worst in the country in 25 years.

Still, Hines said, “I don’t understand why there’s an emergency bill in the works when there is no health emergency in Connecticut. You are attempting to remove our right to a religious exemption based on the myth of herd immunity, the erroneous belief that widespread vaccination serves the greater good.” 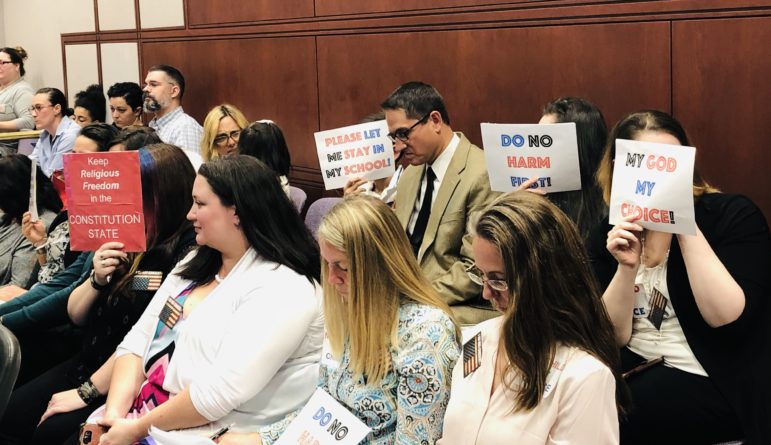 Attendees hold signs expressing opposition to a plan that would wipe out religious waivers.

Herd immunity is the indirect protection from infectious diseases that occurs when a large number of people become immune, especially by way of vaccination. Several of the speakers Monday attacked the claim – calling it a myth or a “false theory.”

A 12-year-old boy who called himself Andrew O. said despite being unvaccinated, he considered himself to be “extremely healthy.” He asked lawmakers to allow him to continue attending school with his classmates.

The repeal would not force children to be immunized but it  would prohibit kids who are not vaccinated on religious grounds from enrolling in the state’s public schools.

“I like going to school because it provides me with challenges,” Andrew testified. “Without those challenges, I would not be able to learn. I get to see my friends that I enjoy spending time with. … If you take away the religious exemption to vaccines, I will not be able to go to school.”

Legislators also heard from several experts Monday, some who extolled the benefits of vaccines and others who did not take a position but testified to their importance for public health.

Matt Carter, the state epidemiologist, told officials and speakers in attendance to think of herd immunity like “a shield.”

“If you achieve certain levels of vaccination in the population,” he said, “you can actually provide protection for everyone.”

At times, the gathering became heated. LeeAnn Ducat, the founder of Informed Choice CT, asked for a show of hands on who would not re-elect those who had “inserted their decision making” over a parent’s right to choose. Hundreds of hands shot up.

Some lawmakers taken aback by the gesture complained.

“I’m so offended by the notion that that would make a difference to me,” said Rep. Pat Wilson Pheanious, D-Ashford. “As someone who has taken an oath of office to do the very best I can to make decisions, they will never be made on the basis of people holding up their hands and saying they won’t vote for me.” 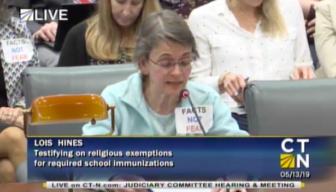 Lois Hines questioned why lawmakers were acting swiftly in the absence of a state emergency.

Dr. Jody Terranova, a pediatrician and board member of the American Academy of Pediatrics’ Connecticut chapter, recalled a time when vaccines were “celebrated.”

“It’s amazing to me that we’ve come to a point where some are more concerned about a vaccine than the disease it prevents,” she said. “Our grandparents would have been lined up for the opportunity to prevent their children from suffering. … . Today most parents of young people in our country are lucky to have never seen these diseases, but talk to the grandparents whose own parents wouldn’t let them swim in public pools for fear of polio.”

Legislators have not said when they plan to introduce a proposal repealing the religious exemption, or what vehicle they might use to do it. The session adjourns June 5.