Some schools say the data on them is wrong 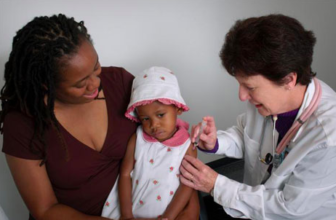 An infant is vaccinated.

The first school-by-school assessments of child immunization rates to be released by Connecticut show scores of schools with kindergarten immunization rates below the 95-percent threshold that the Centers for Disease Control say is necessary to provide “herd immunity” for a community.

The data posted Friday by the Department of Public Health is a reversal of  agency policy against publication — a policy which was being challenged in a freedom-of-information complaint filed by state Rep. Josh Elliott, D-Hamden. It comes amid a national measles outbreak and a legislative debate over whether to end the religious exemptions to vaccinations required to attend school.

The overall immunization rates of Connecticut school children is more than 98 percent, but the newly released data show some schools with high rates of unvaccinated children, some exempted for either medical or religious reasons and others unexplained. More than three dozen schools reported more than five percent of their students claimed exemptions, while the DPH identified nearly 100 schools where less than 95 percent of kindergarten students were vaccinated for measles, mumps and rubella.

“You have some schools where we saw medical exemptions as high as 20 percent and that statistically seems difficult to understand,” said House Majority Leader Matt Ritter, D-Hartford, who is married to a physician. “We have pockets as bad as California was at the height of their outbreaks. So you have to take this sobering news and think about what you do next.”

“This data is startling and needs to be addressed,” Gov. Ned Lamont said in a statement. “This cannot become a public health crisis as we have seen in other states. Making sure all of our young students in Connecticut are safe is the number one priority.”

At the Six-to-Six Interdistrict Magnet School in Bridgeport, 15 percent of the entering kindergarten students claimed a religious exemption, as did 12.5 percent at Ryerson Elementary in Madison. At the public Glenville School in Greenwich, 11.8 percent were unvaccinated, mostly claiming medical exemptions.

The data has its inconsistencies: In some cases schools reported a low compliance rate, but no claims for religious or medical exemptions. For example, the Achievement First Hartford Academy reported that only 69.3 percent of its kindergarten students had received the MMR shot for measles, mumps and rubella, but no exemptions.

And in some cases education administrators say the state numbers are simply wrong. Thomas McMorran, superintendent for Region 9, comprised of Redding and Easton, said he had a desk covered with notes from people shocked by the high percentage of students who were exempted from the vaccination at Redding Elementary School. The data said it was 41.6 percent.

“That’s completely incorrect,” McMorran said. “The actual numbers of students who have not been vaccinated is 22 out of 469. That’s 4.7 percent… I’m just trying to communicate with my families to offset any concerns.”

And in Region 17, Howard Thiery, superintendent,  heard from reporters about the 19.5 percent exemption figure for Haddam Elementary School.  “It’s not even close,” Thiery said. He said the actual percentage of students exempted from vaccinations last year was 3.1 percent.

He suspects it was a data entry error. “Someone just stroked the wrong key,” he said.

Jennifer Travers, school nurse at Talcott Mountain Academy Academy of Science, Math and Technology, a private school, said the reported exemption number for the school — 11.9 percent — is  off.  “It’s definitely nowhere near that,” Travers said. “We are probably in the range of 1, something like that.”

She said she thinks the incorrect percentage  is probably “going to create some panic.”

Religious exemptions to vaccinations for students entering kindergarten remain relatively rare, but they have nearly quadrupled since the 2003-2004 school year, from 316 to 1,255. 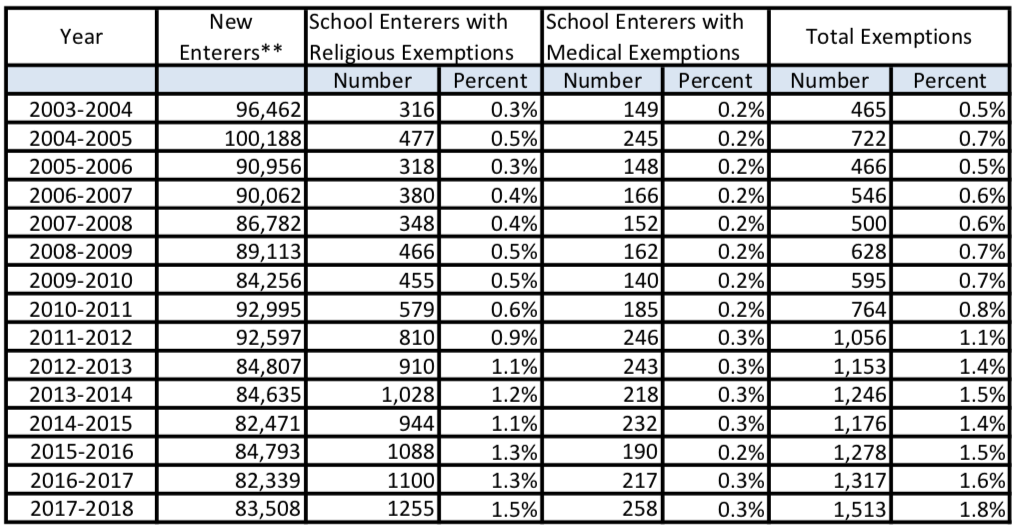 At Greenwich Catholic School, 7.3 percent of the students had religious exemptions allowing them to enter school without vaccinations for measles, mumps, rubella and other infectious diseases. The Catholic Church has no religious strictures against vaccination, as is the case for every major religious denomination in the U.S.

The release comes as the United States is experiencing the worst outbreak of measles since it was eliminated in 2000. At least 704  cases  of measles have been confirmed in 22 states, including three in Connecticut.

Renee D. Coleman-Mitchell, the newly appointed public-health commissioner, announced earlier this week in a letter to school superintendents  that the department would be posting the school-level detailed information to raise public awareness of immunization rates in local communities.

In the letter, she said that more  awareness “may lead to increased engagement and focus on increasing immunization rates to reduce the risk of vaccine-preventable diseases.”

“Today’s data from the state Department of Public Health bears out what many of us feared,” said Senate President Pro Tem Martin M. Looney, D-New Haven. “The immunization level is dangerously low in a significant number of schools and communities putting the public’s health at risk. This is a matter of grave public health concern.”

Ritter, the House leader, said he and his staff were trying to digest the data, which he says must be reviewed with public-health and education officials.

“But there is no question the number is shocking,” Ritter said.

Rep. Vincent Candelora, R-North Branford, cautioned against an overreaction. There have been only three reported measles cases in Connecticut, and he has yet to see a rationale for the state to overrule parents who object to some or all childhood vaccinations. Despite a widespread medical consensus about the safety and efficacy of vaccines, some parents question their need or their safety.

“It’s about balancing the public health with the individual right to choose,” Candelora said.

As Coleman-Mitchell explained in her letter to superintendents, a disease outbreak is less likely to occur in schools where high numbers of students have been immunized and “herd immunity” is established.

“[W]hen almost all the children have immunity, a disease is much less likely to appear at the school and infect children who have not been vaccinated,” she said in the letter. “Herd immunity is achieved when the vaccination rate in a community is high enough to protect unvaccinated children.”

She said that this is especially important for medically fragile children  who cannot be safely vaccinated but are less able to fight off illness if they are infected.

Parents are now able to exempt their children from the vaccination requirement for medical or religious reasons. In addition, students with proof of immunity to certain diseases such as measles or mumps may be counted as vaccinated.

The data show that many of the schools with high rates of unvaccinated students are Christian academies and Montessori schools.

Ritter and Rep. Liz Linehan, D-Cheshire, the co-chair of the legislature’s Committee on Children, were non-committal about pursuing legislation before the session ends on June. 5.

“It’s certainly not something that we can decide overnight, so I look forward to a continuing conversation,” Linehan said. “If we did decide to go ahead and eliminate the religious exemption, some of these schools would be hitting the herd immunity rate. We need to continue to look at that. That’s an important point.”