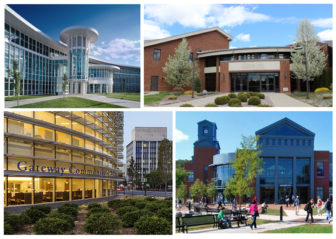 Dismayed by leadership of the Connecticut State Colleges and University system and a plan to consolidate the 12 community colleges, faculty at five community colleges and two state universities have taken votes of no confidence in President Mark Ojakian, the Board of Regents, and the plan itself.

Carmen Yiamouyiannis, chairwoman of the Capital Community College College Senate, which includes faculty and staff, said CSCU leadership has pursued a “top down approach that seems to disregard faculty. It’s ‘this is what we’re going to do’ instead of really trying to engage the faculty.”

The consolidation plan, which is known as “Students First,” has some aspects that Yiamouyiannis thinks would be helpful, including a single application for all 12 colleges and centralizing certain services. But like other faculty, she is concerned that a merger would strip the colleges of their individuality.

Francis M. Coan, a faculty member at Tunxis Community College, said faculty there are poised to vote on a ‘no confidence’ resolution this week.

“It’s clear the leadership is not listening to the professionals,” he said. “We don’t know what action to take except to speak a little louder.”

Two months ago, faculty and students held a news conference at the Legislative Office Building and marched a petition with more than 1,300 signatures over to Gov. Ned Lamont’s office in hopes of meeting with the governor. So far, that hasn’t happened and several faculty said they want to know what the governor thinks about Students First.

“It’s clear the leadership is not listening to the professionals. We don’t know what action to take except to speak a little louder.”

Lamont’s spokeswoman Maribel La Luz issued a statement Tuesday saying the governor “supports the common sense goals behind Students First, which include centralizing back office functions, making it easier for students to transfer within the college system and allocating more resources into teaching and learning where they belong.

“He also understands the merger is a complex issue that people on both sides feel strongly about, but our primary focus must remain on the students,” LaLuz added.

Coan said he’d like to see the Students First plan scrapped and have faculty and administrators come up with a new plan to address the budget constraints that prompted the creation of the original plan.

Several faculty who voted no confidence also said they want Ojakian removed from office and the entire Board of Regents replaced with new members.

Leigh Appleby, spokesman for the CSCU system, which includes four regional state universities in addition to the community colleges, said the vote of no confidence is not a surprise.

“We understand that change can be difficult, but Students First is a necessary step forward,” Appleby said. “As it stands, the three year completion rate is just 16 percent at our [community] colleges. We have an obligation to do better.”

The plan will also help address the system’s financial issues, which he noted is “on the verge of insolvency.”

“We understand that change can be difficult, but Students First is a necessary step forward. We have an obligation to do better.”

“Students First, by consolidating some redundant functions, saves $23 million per year and puts the system on much firmer financial footing,” Appleby said. “Most importantly, it does this while allowing all of our current community college campuses to remain open and fully operational.”

Appleby said implementation of Students First has been “collaborative and transparent” and has included  “more than 400 individuals across all campuses participating in working groups.”

“Over the past two years, we have heard constant opposition from the same groups,” Appleby said. “What we haven’t heard from them is an alternative plan.”

Diba Khan-Bureau, a faculty member at Three Rivers Community College, said she was insulted by Appleby’s comment about change being difficult. “They think we are babies and children and we can’t handle change,” Khan-Bureau said. “I find that revolting. We change all the time.”

Khan-Bureau said, she and other faculty members believe cost-savings could be achieved without consolidating the colleges and in ways that would improve the academic experience for students. “We can do everything to help our students without merging those colleges,” she said.

Many of the faculty members who voted no confidence also questioned whether CSCU’s projected savings will materialize, noting that the system has been adding a new layer of management — needed for consolidation — years before they will be ready to receive the approval from accreditors to go forward with the merger.

“The community colleges are nimble and can quickly respond to community and workforce needs.”

Campus governance bodies, including faculty at some and faculty and staff at others, this month endorsed no confidence resolutions at Asnuntuck, Capital, Gateway, Manchester, and Three Rivers community colleges. Most of the resolutions were simple, saying only that the “representative body for faculty or faculty and staff had voted no confidence in the ‘Students First’ plan, in Ojakian, and in the Board of Regents.”

Others, including the resolutions approved at Capital and Gateway, went into greater detail about the reasons for the vote. Some community colleges, including Tunxis, have scheduled votes in the coming days and weeks.

Also on Tuesday, Anita Levy, associate secretary of the American Association of University Professors, sent a letter dated May 14 to Ojakian and Matt Fleury, chairman of the Board of Regents, saying her association is concerned about what is happening in Connecticut.

While acknowledging that the information the AAUP received came entirely from faculty sources, Levy wrote that assuming its “essential accuracy … we hope and expect that the administration and the CSCU Board of Regents will address the faculty’s concerns and do so in a manner that is respectful of the principles of shared authority and collegial responsibility that we have commended to your attention.”

Appleby said Tuesday that Ojakian had received the letter. 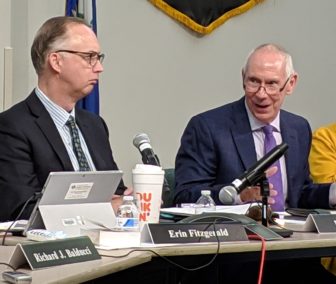 Board of Regents for Higher Education Chairman Matt Fleury, left, with Mark Ojakian, president of CSCU.

Many of the faculty voting no confidence are particularly critical of Ojakian’s recent hiring of three new regional presidents, who will start work July 1 with annual salaries of $220,000. The newly created positions are a key part of the governing structure that would be needed for a one-college system, but that new single college is years away at best.

Accreditors did not approve the first plan for a merger submitted by CSCU last year and have yet to approve a new one. The full merger is not expected to take place until 2023.

Ojakian has said that hiring the regional presidents is a critical step toward the merger plan and he believes the accreditors will be more likely to approve the merger if the administrative structure is already in place.

Many of the faculty consider it a waste of money to hire the regional presidents before the one-college structure is in place.

These new interim CEOs, who will be paid $150,000 annually, will also start July 1. They will replace retiring presidents at Norwalk and Quinebaug Valley community colleges. The fourth CEO will replace James Lombella, who has been serving as president of Asnuntuck community college and as  interim president of Tunxis, but was appointed in April by the Board of Regents for Higher Education to serve as one of the three regional presidents starting July 1.

The new interim CEOs are Michelle Coach at Asnuntuck, who is currently interim dean of academic affairs at the college; Cheryl DeVonish, at Norwalk, who currently serves as chief operating officer at that college; Rose Ellis, at Quinebaug Valley who has served as dean of administration and institutional effectiveness at Housatonic and at Gateway; and Darryl Reome at Tunxis, who is now interim dean of students affairs at Tunxis.