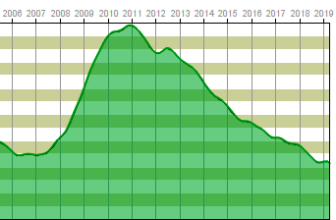 Unemployment trends before and after the 2008 recession.

Connecticut gained 300 jobs in April as its unemployment rate dropped by a one-tenth of a percentage point to 3.8 percent, the state Department of Labor reported Thursday.

The department also revised the state’s job gains in March from 1,300 to 1,600, meaning Connecticut now has added 11,600 jobs over the past year.

“With the small increase in April and the larger positive revision of March data, the 2019 job growth picture has changed from one of slight declines to slight growth,” said Andy Condon, director of the department’s Office of Research. “Annual job growth is actually stronger than last year at this time, as the first four months of 2018 were very weak.”

“This is positive and welcomed news, but we cannot afford to take our foot off the gas,” Gov. Ned Lamont said in a written statement. “When I speak with business leaders large and small, all across our state, I hear the same refrain: shore up our budget and fix up transportation system. We have the opportunity to do both this session, and I urge our legislature to make the smart choices to pass a balanced, gimmick-free budget and create a reliable and sustainable revenue source for our state’s transportation system to give businesses in our state the confidence to stay and grow, and allow us to attract other ones here.”

The professional and business super-sector gained the most jobs in April adding 1,600, while gains also were recorded in: trade, transportation and utilities; education and health; leisure and hospitality; and other services. The largest job loss in April was in the construction and mining super-sector, which lost 2,300 positions. Losses also were recorded in manufacturing, financial activities, and government.

Don Klepper-Smith, an economist with DataCore Partners, repeated his warning Thursday that Connecticut’s job market may not fully recover before the next recession arrives.

“Extrapolating this current growth out in time, we see that the state’s economy is not likely to see full job recovery until mid-2021,” said Klepper-Smith, who served as the state’s chief economic adviser under Gov. M. Jodi Rell. “The odds are that both Connecticut and the nation are apt to be encountering a full-blown national recession prior to full job recovery in Connecticut, which raises serious questions about the state’s fiscal health over the near-term.”