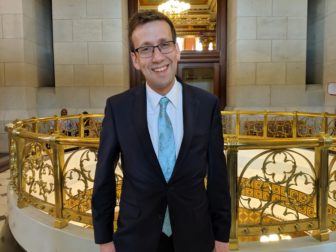 Sen. Matt Lesser, D-Middletown, knows firsthand just how critical it can be to have an EpiPen available in case of an allergic reaction.

Lesser, who has proposed a bill that would make epinephrine auto injectors available in public venues, was attending a legislative reception last year at the Capitol and ate a dessert that looked like chocolate mousse, but turned out to contain peanuts.

He immediately felt the tell-tale signs of a reaction: a tingling in his mouth and swelling lips. But he heard the bell ring for an important vote on pay equity legislation so he dashed downstairs to vote and then immediately contacted Capitol Police officers. As the reaction escalated, he began having trouble breathing.

“I said I was having an allergic reaction and discovered that the Capitol Police, just like the folks in just about every other workplace in the state, don’t stock EpiPens,” Lesser said Wednesday.

Lesser, who has long had an allergy to peanuts, had brought an EpiPen with him to the Capitol but he couldn’t find it. “We called 911 and fortunately the ambulance arrived. They were able to administer epinephrine. I wound up getting two different EpiPens on my way to Hartford Hospital.”

But his reaction was so severe — far worse than in the past — that he had no detectable pulse by the time he was admitted to the hospital.

“I said I was having an allergic reaction and discovered that the Capitol Police, just like the folks in just about every other workplace in the state, don’t stock EpiPens.”

By the next morning, thanks to help of the drugs, Lesser said he had recovered completely and was able to return to work, but the experience convinced him that having EpiPens more readily available in public places would save lives. So he decided to do something about it.

Lesser’s bill would allow public businesses or places — such as camps, baseball stadiums, restaurants or the state Capitol — to stock epinephrine auto injectors in case an adult or child has an allergic reaction.

It would also ensure that someone administering the EpiPen is trained and that he or she could not be held liable for any problems that arise.

Lesser said he expects the bill will be raised next week in the Senate, perhaps as soon as Tuesday.

The Department of Public Health raised concerns about the bill in testimony submitted in March.

“While the intent of this bill appears to have a positive impact on the welfare of patients suffering an anaphylactic reaction,” the department wrote, “it could also have unintended consequences that may not have been considered.”

“Epinephrine is not a benign medication and may lead to other complications,” the department added. “In addition, patients who have suffered an anaphylactic reaction require comprehensive medical follow up.”

Lesser said he believes the Department of Public Health’s concerns have been resolved. He also said he’s not aware of any opposition to the bill in the Senate and is optimistic it will pass.

The Department of Public Health did not respond to a request for comment Wednesday afternoon.

Rep. Robin Comey, D-Branford, a co-sponsor of the bill, said ensuring that EpiPens are available has been a passion of hers ever since her son, now 12, was born and it became clear that he was allergic to legumes and tree nuts.

“Branford was the first town to really have a good policy within the schools,” Comey said. “Then we took that policy locally and brought it up here. We expanded it to all Connecticut schools.”

Comey said her family “knocks on wood” that her son has not had any serious reactions, but she said, “He carries [an EpiPen] with him, everywhere he goes. It doesn’t leave his side.”

The Food and Drug Administration estimates there are 30,000 emergency room visits, 2,000 hospitalizations and 150 deaths due to anaphylactic reactions to food each year, according to information provided by the legislators.

Comey said she wants to see wide access to epinephrine.