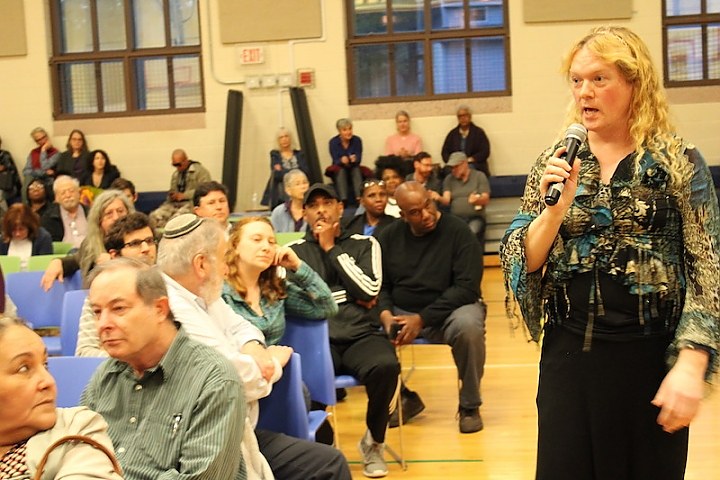 Mayoral candidate Urn Pendragon walks among the audience during her closing remarks.

The gloves came off at the tail end of the first debate of this year’s New Haven mayoral campaign, as candidates established a central theme: Either New Haven has made great progress and should build on it by staying the course. Or its government has gone off the rails and needs drastic change amid looming crises.

New Haven Mayor Toni Harp argued the former at the debate, which took place in the cafeteria at Mauro-Sheridan School. Challenger Justin Elicker argued the latter, as did Wendy Hamilton and Urn Pendragon. All four are vying for the Democratic mayoral nomination.

Two hundred people crowded into the gym for the hour-long debate last Wednesday. The four Westville/West Hills/ West Rock Democratic ward committees hosted the event, which they technically called a “forum.” Westville Village Renaissance Alliance’s Lizzy Donius moderated. The candidates sat at a table on a stage. They did not directly question each other or have designated rebuttal opportunities. The event otherwise had all the trappings of a debate: Opening remarks, time-limited answers to organizers’ questions, closing remarks … and some sharp back and forth — especially in the closing remarks.

Harp, who’s running for a fourth two-year term, closed first. And for the first time of the night, she took aim at her opponents — most specifically Elicker, though she didn’t mention him by name.

She spoke of how as mayor since 2014 she has “enjoyed watching more and more of our kids graduate from high school [and] seeing our unemployment numbers go down by half.”

“But one thing I don’t enjoy is when people distort the good things that we have done in New Haven. Everything that my opponents have talked about doing, I have done,” Harp declared.

“The difference between being a candidate and being the mayor is, I can’t afford to deal with fantasies. I can’t say that we can extort Yale for tens of millions of dollars each year. And I can’t simply believe that there is somewhere a money fairy that is going to magically balance our budget.”

That last reference was to Elicker’s call for Yale to up its annual voluntary payment to New Haven from $11.5 million to $50 million.

When he took the mic for his final remarks of the evening, Elicker, who ran against Harp in the 2013 election, responded to that criticism by tying it to his call for change.

He spoke of how “being a good mayor of a city” is about “vision.”

“It is about what we can do and can’t accomplish,” Elicker argued. “It’s about thinking big. People said about Social Security: ‘It’s a fantasy.’ Now it is the most popular program in the United States. We need to expect more. We have to have confidence in our city that we can do more, rather than muddling along as if everything is just fine. We need to chart a new course.”

Throughout the debate, as they pressed the progress-versus-change themes, Harp and Elicker navigated fine lines they’ve been treading in the campaign.

Harp spoke of new jobs and housing created during an economic boom, of how crime’s down and businesses are opening. Government is fixing “decades-old problems,” she argued. But she also made sure to mention the struggles faced by lower-income families, citing her own upbringing amid economic uncertainty. She argued that the city needs to build on progress it’s making. Her challenge: Tap into New Haven’s pride without seeming out of touch with those left behind. 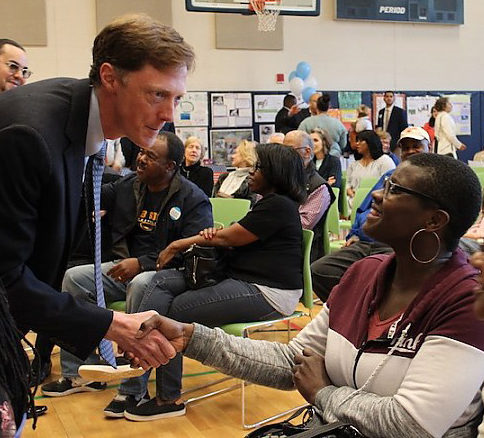 Meanwhile, Elicker acknowledged the boom times downtown, then argued that the neighborhoods are being left out. He argued that wasteful spending, a police department in “crisis” with cops fleeing to higher-paying departments and the constant shuffling of district managers, social promotions (high-schoolers graduating while reading at third-grade levels), and Board of Education mismanagement point to the need for a drastic government course correction. His challenge: Tap into public criticism over government controversies without seeming to knock the city’s accomplishments.

After holding up climate-change Cassandra Bill McKibben’s latest book and assigning it to the crowd, Hamilton offered a straightforward summation of her platform.

“I promise not to raise your taxes as long as I’m in office,” she declared.

“I will go after Yale.

“We will live within our means.

“I will focus on the public schools.

“And I will fix our budget without taxing you.” 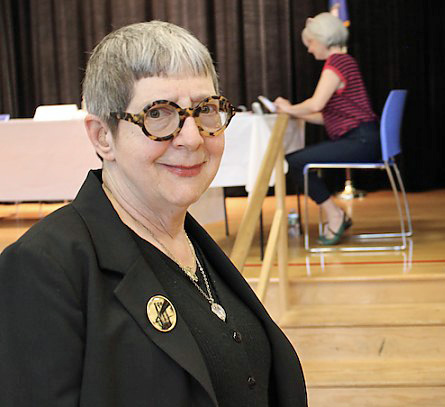 Throughout the evening, Hamilton, in between abolishing the City Plan and economic development departments, cornered the market on quotable lines, according to a scientific survey (i.e. three random people who claimed to agree with me). A sampler:

• “You have a bulldog landlord. You need a pit bull mayor.”

• “The big crime here is behind Phelps Gate. 55 Whitney Ave. is Greed Headquarters.” (The references were to Yale’s Old Campus and investments office.)

The forum closed on a dramatic note, as Pendragon — who earlier stumbled by referring to a Christian Community Action-owned building on Winchester Avenue in Newhallville as part of Westville — stood up for her closing remarks. She turned on the mic and strutted into the crowd.

“I am a transgender woman. And I am absolutely not going to stand on a podium and preach to you,” she began. She paraded down an aisle toward the back, high heels syncopating her spoken lines.

She pivoted back toward the stage, right hand clutching the mic, left arm raised.

“So I’m above nobody else … I live among the people, and I love being with people. This is not a stage act. I am genuine. I will be real … I will be with every single person every step of the way. Everything I have mentioned I have actual plans and I have researched … I have been to meetings. … The alders know me very well with all the community work I’ve done.”

Back at the front of the room, Pendragon dived into her final pitch:

“Everything I’ve talked about have an actual plan for. … I want to hold Yale accountable. I want to balance the budget. I want to bring green energy jobs and help bring more affordable housing to people so they have more income and stop struggling, even if they only have two part-time jobs.

“That’s why I’m running for mayor.”