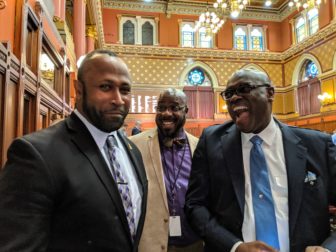 African-American, Puerto Rican and Latino studies would become part of every school district’s high school curriculum starting in 2021 under a bill passed Wednesday by the House.

The bill received strong support with a vote of 122 to 24, with many legislators offering impassioned testimony about the need for the bill. It now goes to the Senate for action.

Some Republican dissenters questioned whether small districts have the resources to offer the course and asked why only two racial and ethnic groups were singled out for special classes.

Rep. Edwin Vargas, D-Hartford, who taught for 35 years in Hartford schools said that for years “American history seemed to be a long catalog of kings, presidents, generals, a few industrialists and a couple of investors, that was about it.”

“Everybody else seemed to get short shrift in American history,” Vargas continued. “Unfortunately, religious, racial and ethnic groups, women, minorities, labor, unions — all these movements in America — they were lucky if they got one or two lines in one of our history books, a quick mention, almost as if they were insignificant.”

“This history is for everyone. In one of the most segregated states in the country, we would be doing an injustice to our children if we didn’t do our part to help them to understand each other more.”

“It’s less than a quarter of an inch,” said Gibson, D-Bloomfield, a key sponsor of the bill. “The history is not being taught in our schools, and so many contributions have been given to this country, to this state, by African Americans and by Latinos.”

Gibson, a school administrator, said the optional course should be offered in all districts, regardless of whether students of color are enrolled.

“Our charge is we want our kids to go to college. It’s a shame that they will go to college and meet up with someone of Latino or African American descent and not be able to relate to them, not be able to understand their histories,” Gibson said. “This history is for everyone. In one of the most segregated states in the country, we would be doing an injustice to our children if we didn’t do our part to help them to understand each other more.”

The bill authorizes the State Education Resource Center to develop the one-credit course for high school students and calls on the State Board of Education to approve it no later than Jan. 1, 2021.

The bill says school districts may offer the course starting in July of 2021, and “shall” offer it by July, 2022.

The fiscal note for the development of the course includes one-time costs of $400,000 for curriculum development as well as the annual salary of a full time staff member — $85,000 plus $35,012 in fringe benefits — to ensure that districts meet the requirement. 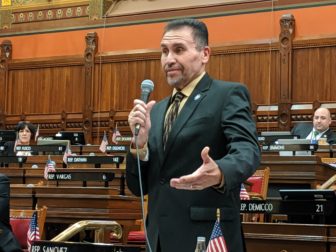 Rep. Bobby Sanchez, co-chair of the Education Committee, explaining the bill in the House Wednesday.

The bill requires the state Department of Education to conduct an audit  from July, 2022 through July 2024 to ensure the course is being offered by each local and regional board of education.

Among those who raised questions about the bill were Rep. Gale Mastrofrancesco, R-Wolcott, who asked why the state should mandate a course on a “particular culture and it’s not mandated that we offer it about every other culture? It’s specific to just two.”

Rep. Vincent Candelora, R-North Branford, said it is “unprecedented the way we have gone with this legislation.”

He said it would be better if black and Latino studies were incorporated into the current history and social studies curriculum, rather than offered as a separate one-credit course.

With all the requirements students have, he said, it will be difficult for students to take the elective.

“I think it’s well-intended,” Candelora said of the bill, “but I don’t think it’s structured in a meaningful way that boards of education can implement and I would hope that we’d take a look at this again and properly incorporate it into our curriculum.”

Rep. Pat Wilson Pheanious, D-Ashford, responded to critics of the bill, saying “You ask why it needs to mandated. It needs to be mandated because it has not happened.”

“Some of us are consistently left out of history,” Wilson Pheanious said. “There is an appalling lack of knowledge about the value and the contributions of people of color… All children have a right to this knowledge. All children need to understand it so they can understand who they are as Americans.”