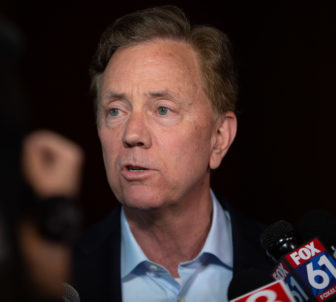 Gov. Ned Lamont’s goal of completing his first state budget on time could be stymied by his reluctance to order taxes aimed specifically at Connecticut’s wealthiest.

Boxed in by large deficit forecasts and caps on spending and revenue, the new administration is finding that progress toward one goal may cause others to unravel.

“Any time you move one piece here or there it creates a concern somewhere else,” said Rep. Jason Rojas, D-East Hartford, who has been House chairman of the Finance, Revenue and Bonding Committee for the past three years.

“I think it’s obvious we have a few things in the revenue package that are causing concern this year,” Rojas said.

Taxing the rich is ‘a really bad idea’

One of those concerns was raised by the governor, who campaigned on a pledge not to raise income tax rates. He avoided that option in February when he proposed his budget, even though state finances were projected to run about $3.7 billion in deficit — unless adjusted — over the next two fiscal years combined.

Some legislators balked at the governor’s revenue package, saying it was too regressive. Hundreds of millions of dollars would be raised by canceling dozens of sales tax exemptions. A new tax would be imposed on sugary beverages and municipalities would be forced to contribute to the teachers’ pension fund.

The committee also proposed a tax hike on capital gains — but only on households already paying the top state income tax rate. That means singles earning more than $500,000 annually from all sources and couples topping $1 million.

Lamont called this a “really bad idea” and repeated earlier warnings that taxing the rich would drive Connecticut’s biggest taxpayers to move out of state.

The finance committee was counting on the capital gains surcharge to raise $262 million per year by 2020-21.

Sources said closed-door talks between the administration and legislative leaders include a scaled-back surcharge only on certain short-term capital gains — investments held for less than one year — that would yield $50 million per year in revenue for the state.

That would leave more than $210 million in other revenue or savings for Lamont and legislators to find to balance the budget.

Property tax relief in in jeopardy? 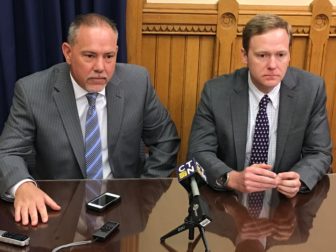 If the governor and legislators can’t agree on taxing the rich to balance the books, the next stop is the middle-class.

Lamont campaigned on a pledge to deliver major property tax breaks to low- and middle-income households. He said most of that relief could come in the third and fourth years of his term by expanding a popular state income tax credit.

But Lamont also pledged to provide some relief in his first budget.

Low- and middle-income households without children lost the ability two years ago to reduce their state income tax obligations by up to $200 — provided they paid that much in local property taxes.

Lamont proposed restoring that eligibility, and the $53 million per year those households lost, starting with tax returns they file in 2021.

But that proposal now is in jeopardy, as the governor and legislators seek alternatives to the capital gains surcharge.

“Governor Lamont remains committed to passing a budget that will put the state on the best path forward for the ensuing biennium and the decades to follow,” said Melissa McCaw, Lamont’s budget director. “… We need to ensure that Connecticut’s residents, businesses and investors have more certainty and predictability and we will not be exposed to tax rate volatility while the state bounces from one financial crisis to another.”

But some of the Lamont’s fellow Democrats in the House and Senate see things differently.

The House Democratic Progressive Caucus, which includes more than 40 of the 91 party members in that chamber, has been pressing for higher income taxes on the wealthy since the session began.

These could be used, members said, to scale back the governor’s sales tax plan, shore up funding for education, health care and municipalities, or reduce Connecticut’s significant pension and bonded debt.

The caucus teamed with dozens of labor unions, churches and other religious groups Monday at the Capitol for the “Fair & Just Budget Rally.”

Organizers sent the administration an array of options for taxing the wealthy, including the capital gains surcharge recommended by the finance committee.

They also offered a “3-2-1 plan” to boost the top marginal rates on the state income tax.

Couples making more than $1 million per year already pay 6.99 percent on all earnings.

Under this plan, couples earning:

The coalition’s final option was the so-called “mansion tax,  a statewide property tax of one mill on houses valued at more than $1 million. Proponents estimated this would raise $59 million per year.

But sources said the focus of the administration has been on avoiding major tax hikes on the rich.

With Republicans in both chambers offering no alternative budget — and making it clear they will vote against any plan with tax hikes — Lamont and most of his fellow Democrats likely must solve the next budget by themselves.

“We’re hoping we come up with that balance to where it passes our caucus, passes the Senate and gets the governor’s signature,” House Speaker Joe Aresimowicz D-Berlin, said. “We can’t just do it on our own.”

House Majority Leader Matt Ritter, D-Hartford, said the capital gains surcharge endorsed by the finance committee “made sense” to him as part of a larger mix of revenue-raising proposals. “The governor disagrees and he’s the governor of the state. We’ve got to work with him on that.”

So what happens if Democratic leaders ask rank-and-file legislators to adopt a budget with no tax hikes aimed at the rich?

Aresimowicz and Ritter declined to speculate on what that final plan might contain, but both expressed optimism they can secure the necessary votes.

“I would say the previous two years and this year we spent a lot of time talking to caucus members,” Aresimowicz said. “I think we have a good understanding of where their priorities are and where they’d be willing to land.”

“People have opinions, but there’s not a divide whatsoever,” Ritter said. “We have a 91-person caucus that is tight, working together. We have moderates, we have liberals, we have everything in between.”

But Rep. Anne Hughes, D-Easton, co-chairwoman of the progressive caucus, said leaders should not underestimate her caucus’ commitment.