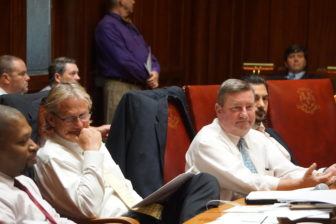 Sen. John Kissel, right, gestures after Republicans did not follow his lead.

The state Senate voted 23-13 Thursday night to pass and send to the House of Representatives a bill requiring greater scrutiny of jailhouse witnesses, a measure sought by the Innocence Project in reaction to exoneration of a man implicated by a convict’s testimony.

The Democratic and Republican leaders of the legislature’s Judiciary Committee, Sens. Gary Winfield of New Haven and John A. Kissel of Enfield, urged passage of a bill that requires prosecutors to disclose the backgrounds of jailhouse witnesses and judges to hold a hearing on their credibility in murder and rape cases.

“To me, it’s a small extra step,” said Kissel, the ranking Republican on the committee.

The role of a jailhouse witness, as well as DNA, were instrumental in the exoneration of Alfred Swinton, who served 18 years of a 60-year sentence for a murder. He was released last year after a judge vacated his conviction.

One of the witnesses against Swinton was Michael Scalise, a jailhouse informant in several cases. He claimed Swinton admitted to the murder while they were jailed together. Scalise, whose cooperation agreement prosecutors never was disclosed to Swinton’s lawyers, was released early from prison.

“What our bill is seeking to do is add more transparency to the system,” said Michelle Feldman, the state campaign director for the Innocence Project.

Despite Kissel’s support for the bill, other Republicans opposed it.

Prosecutors objected to the bill, saying the question of an informant’s reliability should be a matter for a jury, not screened by a judge. Sen. Gennaro Bizzarro, R-New Britain, agreed with them.

“I think it’s the core function of the jury in criminal cases to listen to all the evidence and [assess] the credibility of witnesses,” he said.