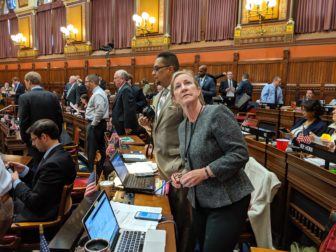 Rep. Christine Palm checking the vote in the House Wednesday.

Tucked into an education bill that touched on an assortment of issues, including teacher tenure and magnet schools, was a seemingly innocuous provision adding climate change to a list of subjects that must be taught in public schools.

At a late-night session in the House of Representatives earlier this week, however, the provision drew such vehement opposition that after more than an hour of debate legislators decided to put a hold on the bill.

Lawmakers eventually removed the climate change requirement so they could pass the balance of the bill that night, but House Majority Leader Matt Ritter, D-Hartford, and Rep. Christine Palm, D-Chester, a key proponent of the measure, said the climate change proposal is still alive.

Palm says she hopes to see the proposal back before the House next week.

“This bill would have put into statute what most districts are already doing,” said Palm, who taught English for a decade, “and it would be a way of encouraging other districts to get on board… I think in this critical time it is important to say to the rest of the country and all the people in Connecticut that we take climate change very seriously here.”

The Next Generation Science Standards, which Connecticut adopted in 2015, include climate change as one of the topics to be covered and the state provides curriculum to support that goal.

“The standards are a very authoritative guide,” Palm said. “My feeling is it’s not the same thing as having it in law. They are an excellent pedagogical tool. They are a goal. They are not actually a statute and to me the weight of the law is different from best practices. This would be codifying best practices into law.”

If Connecticut were to pass the requirement, it would be the first state in the country to do so, Palm said.

“When 98 percent of peer-reviewed scientists agree that global climate change is manmade and only humanity can fix it, I believe that,” Palm said. “We owe it to our children to give them the knowledge of the precariousness of their world so they can be part of the change.”

On her proposal, Palm said, “There is willpower to do this.”

But last week, Republicans showed their distaste for the requirement as speaker after speaker raised doubts about whether climate change can be linked to human activity, voiced opposition to placing another mandate on school systems, and questioned whether lawmakers should be legislating curriculum.

Rep. John Piscopo, R-Thomaston, said the Next Generation Science Standards “mandate that teachers must teach that human activities, such as release of greenhouse gases, carbon dioxide is a major cause of the earth’s warming surface, global warming… I submit that’s debatable in science.”

“There’s a very rigorous debate going on now among scientists,” he continued, and “if you mandate that they teach one side of a scientific debate … The teachers lose that freedom to be able to use it as a teachable moment, to teach that there is a debate. Let’s go through it in class, let’s study both sides of the issue here. If you teach one side, it becomes indoctrination. It’s not teaching anymore. It’s not learning.”

Rep. Charles Ferraro, R-West Haven, who said he spent his undergraduate training in biology, said he agrees that the earth is warming but raised questions about whether humans are causing it.

“It does appear to me that we are talking about a very emotional subject in which lines have been drawn,” Ferraro said, “but I am thinking we have children and their minds at stake. We really should give them the opportunity to look at the science on both sides…Right now I find it hard to believe that we are going to teach climate change in our schools system and anybody who doesn’t agree with what is being taught is is a ‘climate denier.’ To me, that’s just so negative.”

“Global warming is part of the earth’s cycle,” Ferraro added. “It’s going to continue  years and years into the future as well as future global cooling…”

Jason Perillo, R-Shelton, asked if, under the proposal,  “a self-proclaimed climate change denier” could teach “what they believe consistent with their denial of climate change?”

Rep. Bobby Sanchez, D-New Britain, said teachers would not do that because they would have been trained in the climate change curriculum. “It’s my understanding that whatever they’ve been trained in, that’s what they’ll teach,” Sanchez said.

Perillo responded, “I don’t think we should be forcing teachers to teach certain things because they are what we believe and because we are passionate about them.”

Palm countered during the discussion that there is a “basic difference between subjective and objective approaches.We have the humanities and we have the sciences and the sciences are not subjective. They are based on empirical data.”

While teachers and students may have differing opinion on whether they like a poem by Robert Frost,  Palm said,  “I don’t believe that a science  teacher is given to the vagaries of opinion.They are taught and they then teach their students responsible science, which is fact-based. It is not subjective. So I don’t believe a climate-denying science teacher would be responsible in passing along that opinion.”

“We can talk about whether or not climate science is real, whether scientists disagree,” Palm said. “The fact is they don’t. We disagree. Ninety-eight percent of peer-reviewed climate scientists agree that the destruction of our environment is manmade and can be reversed if we get going on that reversal.”

Others not supportive of the measure included Rep. Whit Betts, R-Bristol, who said he doesn’t feel personally qualified to legislate such curriculum decisions. He sees it as the job of the State Board of Education and teachers to decide on the curriculum.

Lawmakers have weighed in on curriculum decisions before. Last year, legislators voted to require that schools teach students about the Holocaust and other genocides. And last week, the House passed a bill that would require all school districts to offer African American and Latino history.

“I don’t believe that we can sit here as a body and do this year in year out,” Betts said. “Adding and deleting and modifying… Is that really what our job is? If it is, why do we have a State Department of Education? Is it not their job?”

Rep. Holly Cheeseman, R-East Lyme,  also questioned the need for the legislation given that climate change  is already part of the Next Generation Science Standards.

“Should we be as kind to the planet as we can? Absolutely,” she said. “On the other hand, we are burdening our children with a fear that doomsday is upon them.”

“I remember growing up with the Cold War and hiding under my desk. That wasn’t a fun thing. We have record levels of anxiety, depression and mental health problems in our children. Surely a better use of our time here is to discuss how to raise healthy , mentally sound children.”