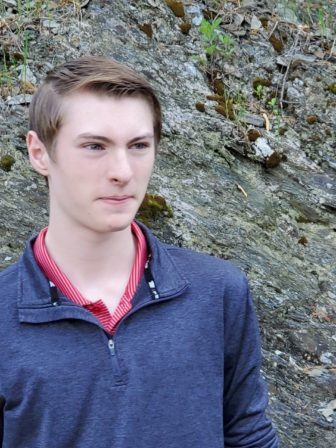 Eric Dillner, 15, supports legislation that would require schools to have emergency communication plans for students who are deaf or hard of hearing. Eric is deaf in one ear and has hearing loss in the other.

Eric Dillner wants to feel safe in school, but that’s not entirely the case right now.

He fears there might come a day when an intruder enters the school, but he won’t hear the message of a code yellow or a code red over the intercom because of his hearing loss.

And if he’s in the corridor or in the bathroom, he might find himself locked out of his classroom, stranded in the hallway and completely in the dark about the emergency.

“I don’t want this to happen to me,” said Eric, a student at Daniel Hand High School in Madison, in a recent interview. “I want to be safe. I want to know I’m safe.”

For that reason, Dillner and his mother, Susan Yankee, testified in March at a hearing held by the legislature’s education committee in favor of a special education bill — House Bill 7353 — that includes a requirement for school districts to have an “emergency communication plan” in place to alert students identified as deaf or hard of hearing about an emergency situation and ensure that a student’s needs are met.

The bill, which was approved unanimously late Wednesday by the House of Representatives, also requires various state agencies to consider those emergency plans in the guidance they provide to school districts about school emergency procedures and construction projects. The bill now heads to the Senate.

“I think parents just assume their child has an emergency plan that addresses the fact that they can’t hear,” said Yankee, who is part  of the state’s Advisory Board for Deaf and Hard of Hearing Persons, which recommended the legislative proposal.

But that’s not always the case, she said.

“With the Colorado shooting the other day being the 35th school shooting since the fall,” Yankee wrote in a recent email, “it is unconscionable that our most vulnerable do not have a safety plan during school emergencies that addresses their hearing loss. We can’t go another school year without protecting these students.”

While testifying before lawmakers in March, Yankee asked, “How can I send my son to school every day knowing that he might not hear an emergency announcement of an officer telling him to stand down?”

Eric, who is 15, wears a hearing aid in one ear, but even so, he has trouble hearing announcements over the school intercom and teachers speaking quietly, or determining which direction sounds are coming from.

“I was in elementary school when the Sandy Hook shooting happened,” Eric told legislators at the hearing, “and I can’t believe that for the past seven  years I have not had an emergency plan in place that considers my lack of hearing.”

“I was in elementary school when the Sandy Hook shooting happened, and I can’t believe that for the past seven  years I have not had an emergency plan in place that considers my lack of hearing.”

Yankee is concerned that with only a week left in the legislative session, the bill might not get taken up this year.

Rep. Robin Comey, a Democrat from Branford and a member of the legislature’s education committee, said she believes it will, however.

“If our kids who are vulnerable do not have a safety plan in place during school emergencies that addresses their hearing loss,” Comey said, “then we’re not giving them a safe place to attend school. Children’s safety is always of the utmost importance.”

Rep. Catherine Abercrombie, D-Meriden and co-chairwoman of the human services committee, said students should have a “universal plan” that follows them as they move from one school to another.

“It’s not different from what we do for other students, except this is even more dire because if you can’t hear,  you don’t know what’s going on,” said Abercrombie.

Jeffrey S. Bravin, executive director of the American School for the Deaf in West Hartford and a member of the advisory board on deaf and hard of hearing persons, said the measure is critical for safety reasons.

In the case of an alarm for an intruder, Bravin said, “You don’t want everyone to disperse and a deaf student is left standing out in the open if there is a shooter in the building.”

The assumption, Bravin said, that “those kids will be fine, they will follow all the other students, is not accurate. They need access to the same information.”

“You don’t want everyone to disperse and a deaf student is left standing out in the open if there is a shooter in the building.”

Bravin said that the American School for the Deaf has a wide range of ways to alert their students to emergencies that employ auditory and visual means, including clocks that strobe and flash with a caption on the clock that describes the emergency, saying, for instance, “This is a lockdown. Find a place to hide.”

The school’s extensive message system also provides critical information visually on all television and computer monitors in every classroom, office and common area. And, there are auditory alarms.

Sheri Romblad, the mother of a child who attends the school, said she’s been present during fire drills and “It’s like the apocalypse. It’s amazing how wired they are. Lights flashing, things on television monitors …”

Romblad, who is also a member of the advisory board on deaf and hard of hearing persons, said the comprehensive alert system helps to allay parent’s worries.

Otherwise, she said, “They could be casually at the water fountain and something catastrophic could happen and they would be the last to know.”

Asked why it is that emergency plans for students who are deaf can be overlooked, Bravin said that some people call deafness “an invisible disability.”

“You can look at an individual and you will not know if they are deaf or hard of hearing because they look normal,” he said.

And, he said, if the student has a hearing aid or cochlear implant, the assumption may be that the individual “has full access to sounds, but that’s not necessarily the case.”

This story was updated at midnight on May 30 to reflect House passage of the bill.