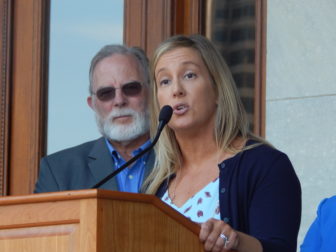 Rep. Liz Linehan, D-Cheshire, speaks at an anti-hate rally outside the Capitol in 2017 (file photo).

The House of Representatives has bickered for long hours this week on topics ranging from climate change to banning single-use plastic straws, but on Wednesday evening they came together swiftly and unanimously for a bill that would help prevent bullying in schools.

The “Act Concerning School Climates” would establish a school climate collaborative to ensure that local districts have access to best practices in social-emotional learning.  The bill also modifies the definition of bullying to include acts that are pervasive and persistent, as well as single acts that are severe.

Although the vote was unanimous, discussion of the bill was at times emotional.

When Rep. Vincent Candelora, R-North Branford raised concerns about “differentiating between behavior that should be reprimanded because a child might have acted up in a classroom … versus repetitious behavior that rises to a higher level,” Rep. Liz Linehan, D-Cheshire, a key proponent of the bill, offered her own personal experience.

“When I was in high school, I was so severely bullied, I had a group of girls break into my home and look from room to room while I hid in a closet,” Linehan told her colleagues. “They wanted to drag me out and beat me up. That was just a one-time incident. I think everybody can agree that something along those lines is severe enough that it can be called bullying.”

“Yes, it can be the smaller instances of poke, poke poke … consistent picking on a child, but it can also be one larger act that sufficiently … places an individual in reasonable fear of physical or emotional harm or infringes on the rights or opportunities of an individual at school,” she said.

Linehan also spoke about how the bill was inspired by the December death of a young girl in Cheshire, Anjelita Estrada. Anjelita, 11, committed suicide after she was harshly bullied, Linehan said.

Linehan said one of the goals of the bill is to bring the latest thinking in social-emotional education to school districts to create better learning environments.

She said the collaborative, which will identify best practices and develop a biennial state-wide school climate survey, will include parents, school officials, mental health specialists, educators and others.

“We want to get away from strict discipline and instead work to get the kids the help they need,” she said. “So I’ve said this … because a child might have committed an act of bullying – that doesn’t make them a bully. It could be a cry for help. Many times a child who acts out this way, really just needs a little extra services or they need to be better understood.”

She said the task for the collaborative is to assess school climate and do more to prevent bullying by finding ways to support “our children so that we don’t even get to bullying in the first place.”

She said that science has evolved to provide a greater understanding of social and emotional learning and the benefits of a positive school climate, which she  said can enable “emotional growth, self-regulation, academic performance, lower drug use, school violence and, yes, suicide.”

The bill goes now to the Senate.