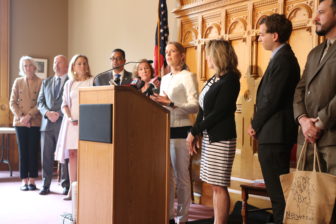 Connecticut would outlaw plastic bags with handles as of July 1, 2021 under an amended bill announced Wednesday that gives retailers an extra year to implement the ban.

The legislation was proposed by Sen. Christine Cohen, D-Guilford, and Rep. Mike Demicco, D-Farmington, who gathered with environmental advocates from the Connecticut League of Conservation Votes and the Citizens Campaign for the Environment to announce details of the bill. They expect the bill to be raised this week in the Senate.

“The time is now to pass legislation that will ban these bags that are contributing to pollution in our oceans and forests, as well as on our highways, beaches and in our parks,” Cohen said. “This bill will get us one step closer to ensuring that our environment and wildlife are not harmed by plastic bags and provides Connecticut’s businesses with enough time to find environmentally conscious alternatives.”

Cohen said that a billion plastic bags are used each year in Connecticut.

The amended bill unveiled Wednesday would prohibit stores from providing or selling plastic single-use carry out bags at the point of sale. It would also require that any paper single-use carryout bag be made of 40 percent recycled content and be 100 percent recyclable. Paper bags would be required to display the message: “Please reuse and recycle this bag.”

The original plastic bag bill called for the ban to begin in January 2020. Cohen said pushing it back until 2021 allows retailers “a two year period in which … to burn through inventory of plastic bags and really prepare themselves.”

She said the proposal would also coordinate well if legislators pass a budget that includes a 10-cent fee on plastic bags for two years.

In addition she said, it does not pre-empt municipalities from having their own regulations on single-use bags, as long as the city or town ordinance is at least as restrictive as the state’s.

The bill also says that nothing would prohibit towns from enacting an ordinance on single-use paper bags.

Any owner or operator of a store who violates the provisions of the bill would be issued a warning for the first violation and fined $250 for a second or any subsequent violation.

Louis W. Burch, Connecticut program director for the Citizens Campaign for the Environment, said the bill “has been a long time coming. We’ve been working on this with no progress over ten years at the state level at least… Obviously, there’s huge grass roots support for an outright ban on plastic bags [now]. This doesn’t do that but it’s a step in the right direction.”

Chris Phelps, state director for Connecticut Environment, also spoke positively about the bill, saying that plastic bags “are an example of a single-use plastic product that we use for a few minutes and then they persist in the environment for hundreds or even thousands of years …. We have plenty of other ways to carry things home from the store. It’s just absurd that we would use things for just a few minutes and that they will persist long past our lifetimes.”