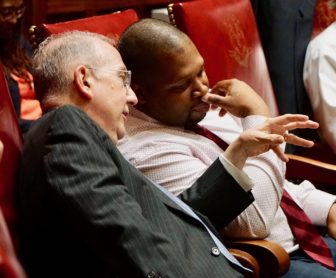 One state senator’s quiet negotiations with police chiefs and officers led to the unanimous passage Wednesday night of law enforcement accountability legislation drafted in response to the police shootings of motorists in New Haven and Wethersfield.

The bill prohibits officers from firing at motor vehicles unless there is an imminent threat to the life of an officer or bystander, essentially codifying in state law the tactics taught to police and the policies of many Connecticut police departments.

The measure dictates a timetable for the release of video from dash and body cameras in cases of fatal police shootings, and requires the collection and reporting of data involving the use of force, discharge of a firearm or pursuit of a motor vehicle.

Sen. Gary A. Winfield, D-New Haven, the co-chair of the Judiciary Committee, said the passage of the measure without debate or dissent on the consent calendar was the result of conversations and negotiations with police.

“I just believe that in the past when we were trying to do these bills, the bills got stopped before they ever started, to be honest,” Winfield said. “They just assumed we hated police.”

The bill now goes to the House of Representatives.

It is the second law-enforcement accountability measure to unanimously pass the Senate in two nights. On Tuesday, the Senate voted for a bill that would require the collection and publication of data showing how prosecutors make decisions about charges, diversionary programs, bail requests, plea deals and sentencing recommendations. 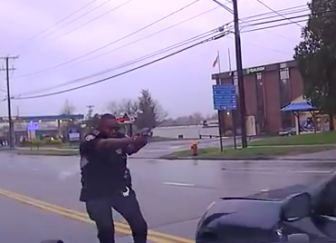 A Wethersfield police officer fires into a car.

The measure passed Wednesday was drafted in response to police shootings that prompted public outcries. Both involved unarmed motorists, one shot after a chase into New Haven by Hamden and Yale police and another after an officer stepped in front of a fleeing driver in Wethersfield. Both incidents were captured on video.

On April 20, a Wethersfield police officer stepped in front of a car after a chase, firing twice when the teenaged motorist tried to drive away. The 18-year-old driver, Anthony Jose “Chulo” Vega Cruz, died two days later.

On April 16, a Hamden police officer responding to a report of a robbery pursued a car into New Haven and fired into the passenger’s side door window, wounding a passenger. The couple was unarmed. The mayor of Hamden said after viewing video of the incident he was ready to recommend termination of the officer.

The measure also addresses the Wethersfield incident: “No police officer shall intentionally position his or her body in front of a fleeing motor vehicle, unless such action is a tactic approved by the law enforcement unit that employs such police officer.”

In 2015, the legislature passed a law requiring mandatory reporting about the use of tasers, a response to the death 23-year-old Jose Maldonado. He was shocked in the chest by a taser during a scuffle with police in the East Hartford police lockup, and an autopsy concluded the cause of death was cardiac arrhythmia due to electric shock.

The use of tasers is reported to the state, but state law only requires that other uses of force be documented locally.

Between January 2015 and May 2017, the Washington Post found,  police shot at least 193 people who were inside vehicles. In 76 cases, the person killed was not armed and only the vehicle was considered the weapon. In 17 of those cases, the person shot was fleeing.

Chuck Wexler,  the executive director of the Police Executive Research Forum, said the admonitions against shooting into moving motor vehicles in other than extraordinary circumstances are widely accepted as good public policy and smart police tactics. But he was  unaware of any state placing such a prohibition in law.