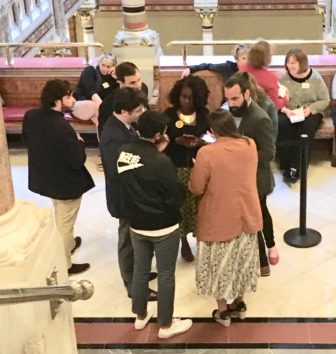 Carlos Moreno, at right, briefs advocates of the Trust Act on revisions to the bill.

The House of Representatives voted 79-61 for final passage of revisions to the Trust Act of 2013, taking a stand for the second time in six years on the side of protecting the due-process rights of the undocumented.

“The rationale for this law is simple,” said Rep. Steven Stafstrom, D-Bridgeport, co-chair of the Judiciary Committee. “Everyone in this country is entitled to due process of law.”

At issue are the circumstances under which state law enforcement should honor a civil detainer, an order from immigration officials that has not been reviewed by a U.S. District Court judge or magistrate or a Connecticut Superior Court judge.

The Trust Act of 2013 required a judicial order to detain someone for ICE, with seven exceptions, such as an immigrant being deemed a threat to public safety, named on a terrorist watch list, convicted of a felony or facing pending criminal charges or a final deportation order.

The issue was a bipartisan one in 2013, when the policies of Democrat Barack Obama were in dispute. Not so in 2019, with Republican Donald J. Trump in the White House, immigration a wedge issue, and ICE under fire by the political left.

No Republican voted for the measure Thursday, as was the case when it passed the Senate on May 15. Two Democrats, Reps. Pat Boyd of Pomfret and Pat Wilson Pheanious of Ashford, voted with the GOP. Both are from eastern Connecticut, where the state split over Trump in 2016

Nothing was simple about the road to passage. To head off a GOP filibuster, Democrats agreed to revisions in the Senate bill, permitting law enforcement more discretion than in the original version. The revisions were made in a separate bill, an unusual step that saved the Senate from another debate on a measure that took eight hours to pass.

Instead of eliminating all seven exceptions, two now remain: Without a judicial order, state law enforcement and court officials still can detain any undocumented immigrant who is on a federal terrorist watch list or has been convicted of a major felony.

“This bill is still a major step forward from where we were in 2013,” said Carlos Moreno, the state director of the Working Families Organization, which lobbied for the bill. “It goes far in protecting undocumented immigrants.”

Most immigrants detained for ICE are done so on the basis of being subject to a final deportation order, Moreno said. It is rare or unprecedented for anyone in Connecticut to be detained for being on a terrorist watch list, he said.

Citing research by an immigration clinic at the Yale Law School, the Connecticut Immigration Rights Alliance complained in March that some judicial marshals, who provide security at state courthouses and lock-ups, enforced civil immigration detainers in possible violation of the 2013 law.

A single marshal was responsible for enforcing more than half of ICE detainers over a one-year period reviewed from September 2016. But the group’s report indicated that 45 of the 50 persons detained for ICE were under a final order of removal, one of the criteria allowed in the 2013 law but not in the revision version.

According to the Pew Charitable Trusts, Connecticut is one of nine states to have laws limiting the cooperation of local courts and law enforcement with ICE, while nine state have passed anti-sanctuary laws.

Moreno said California and Illinois have the strongest Trust Acts, barring any detention for an undocumented immigrant in the absence of a judicial order.